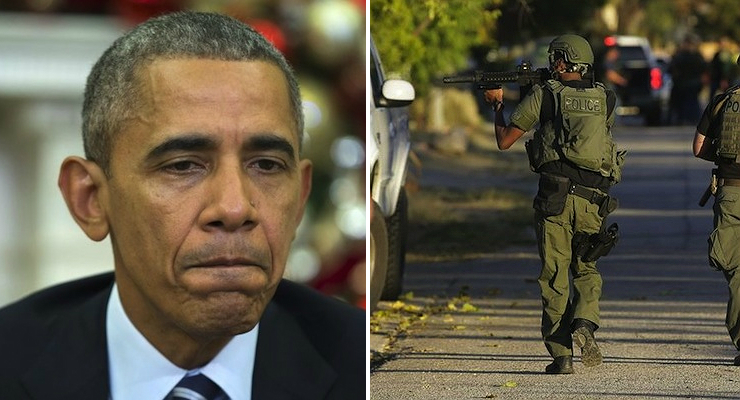 President Barack Obama pauses while making a statement on Wednesday’s mass shooting in San Bernandino, Calif., in the Oval Office of the White House, left, while law enforcement, right, searches for a suspect in a mass shooting at a social services center Wednesday in San Bernardino, Calif. (Photo: AP /Evan Vucci/Chris Carlson)

The Obama administration is not only at odds with America, as founded, but also woefully out of touch with ordinary Americans, and it is deceitful or delusional (or both) on guns.

President Obama twisted himself into a pretzel to deny that the San Bernardino, California, massacre was committed by Islamic terrorists. Even as facts accumulated — making the obvious undeniable — he continued to cling to the preposterous narrative that it was workplace violence. It’s those high-stress jobs, you see, that cause otherwise peaceful people to fire up their time machines and go back to buy weapons to kill dozens of people who have nothing to do with their workplace grievances.

The ever-clueless White House press secretary, Josh Earnest, referring to recent shootings and the San Bernardino terror attack, said: “The more that we see this kind of violence on our streets the more people go out and buy guns. And that is both ironic and tragic.”

In the first place, these liberals have never been able to refute the axiomatic truth that making our gun laws more restrictive would not have prevented the various mass shootings they invariably use to launch new salvos against gun ownership. So the fact that they even raise the issue after these incidents is obscenely dishonest, opportunistic and hyper-partisan.
In the second place, guns are not the cause of these shootings. Indeed, in many cases, guns could help prevent them or reduce injury and death. It is no accident that these evildoers often unleash their hellfire in gun-free zones.

In view of the facts, how could Earnest call it “ironic and tragic” that in response to these acts of violence, more people buy guns? It is not ironic, because people rightly believe they will be safer with guns, and the American people know that Obama and his ilk want to confiscate their weapons, which they make clear every time there’s a mass killing involving guns. It’s not tragic, either, because increasing gun ownership is quintessentially American and constitutional, and it increases the safety of the American people. What’s tragic about that?

What is tragic is that this administration uses these terrible incidents, whether terrorism-related or not, to distort and politicize the gun issue. What is tragic is that it selectively cares about shootings depending on the identity of the perpetrators and victims and the motivation of the killers.

The administration barely blinks an eye at all the black-on-black gun shootings around the country, especially in Obama’s hometown of Chicago, though far more people are killed by those often-gang-related gun killings than the mass shootings Obama always politicizes. It begins federal investigations when there’s a shooting by a rogue cop but ignores the chronic inner-city murders where cops are not involved. It’s not the killings that Obama cares about but his agenda. He showcases one type and ignores others to serve his political obsessions.

If President Obama cared about the safety and security of the American people, would he go out of his way to deny it when Islamic terrorism is obviously the cause and ignore that there is a disturbingly increasing pattern of such on American soil? Would he deceitfully pretend that ready access to guns and excessive gun ownership are the proximate cause of blatant acts of Islamic shootings?

Only God knows why Obama pursues his destructive policies, but more and more Americans realize that he is putting them at greater risk by trying to make them less safe personally and degrading our national security and our leadership presence around the world.

As ordinary Americans are fully aware of Obama’s dangerous policies, it is neither ironic nor tragic that they are running out and gobbling up all the weapons they can get their hands on. It is eminently rational behavior for people interested in self-preservation.

So please continue to spew nonsense, Mr. Earnest, and even more Americans will wake up to this administration’s recklessness.