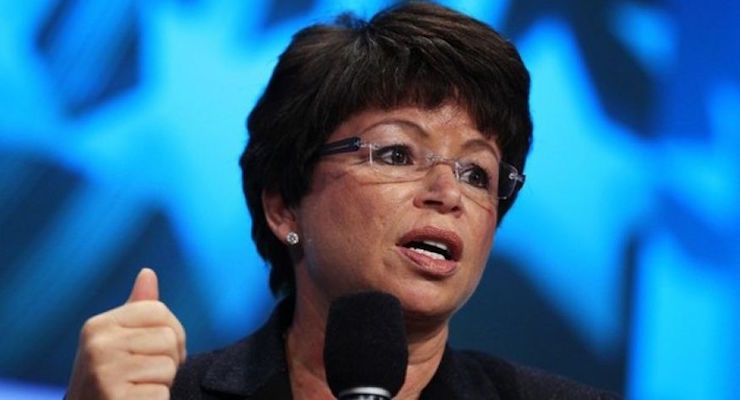 Valerie Jarrett, who’s seemed to have jumped into the role of Lie Czar for this week’s White House public relations sell–supplanting perhaps Susan Rice, of “blame Benghazi on a video fame”–donned her anti-truth shield and took to national TV to showcase her skills and tell the watching public: My boss, President Obama, isn’t really bypassing Congress by issuing executive orders for gun control.

“Let’s be specific,” she said, in a broadcast interview in the lead-up to Obama’s issuance of his not-bypassing-Congress-but-still-coming-unilaterally order. “The president is not circumventing Congress.”

And with that, the straight-faced Jarrett skewered through the definition of executive order, itself–as if the American public were that stupid.

Why is this administration so bent on bending the truth?

Scratch that. That answer’s obvious – to grab power and control at all costs. But understanding the motive doesn’t make it any less maddening. Perhaps the better question is: Why are there so many in this White House with such careless regard for the truth?

Wordplay is an art with these guys, so much so that entire websites have been to keep track of Team Obama’s spin. Remember White House press secretary Jay Carney? Well, he’s got his own “9 Top Lies” website. Another of the old gang, Stephanie Cutter, former campaign spin-meister for then-candidate Obama, even sparked her own hashtag — #FireLiarStef. What a proud moment for the elder Mrs. Cutter that must have been.

Obama alone has several websites dedicated to tracking his lies, most notably by the Pulitzer Prize-winning PolitiFact, a site that can hardly be pointed to as right-wing propaganda but that nonetheless found double-digit cause to ding the president over the years (don’t forget to scroll to the next pages at the bottom of the link).

And we’re still trying to sift through the lies and deceptions and cover-ups and so forth of Obama’s first administration. Think Hillary Clinton and her whole “what difference at this point does [the truth] make” moment. Think again, the previously mentioned former national security adviser Susan’s Rice sad and despicable parrot squawks of You Tube videos sparking terrorism, followed by her equally sad and despicable characterization of U.S. Army deserter Bowe Bergdahl as “honorable.”

It’s been a busy couple of administrations. Unfortunately, it shows no signs of letting up. Obama isn’t going to grow a conscience any time soon. His hand-picks aren’t going to fly the proverbial straight arrows. His White House assemblage isn’t going to suddenly right its tipped moral compass. And most specifically, Jarrett isn’t going to admit her shamelessly presented shameful spin on words is all fallacy, aimed at confounding an already confounded public.

More of the same – that’s all we can expect from this president and this White House these next 12 months.

So what’s a fed-up patriot to do? Take heart. Fisher Ames, a Founding Father with considerable oratory skills, is said to have remarked: “Our liberty depends on our education, our laws and our habits … it is founded on morals and religion, whose authority reigns in the heart, and on the influence all these produce on public opinion before that opinion governs rulers.”

And with that in mind: The election’s coming.

The president’s leaving, and with him, his team of skilled skewers of truth. It’s not that the incoming commander-in-chief, either Democrat or Republican, will be perfect followers of the “I will not tell a lie” way of thinking. But chances are, the voters are so fed up with the easy lying this administration does, the next White House chief to be elected won’t be half as bad – meaning, not Hillary – and the change on Capitol Hill won’t be one of just mouths, rhetoric and politicking, but also heart, morals and religion.

The State of Liberty in America