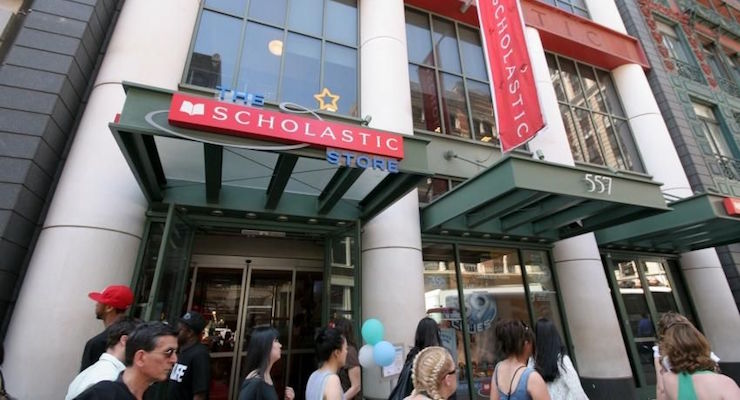 The entrance at Scholastic headquarters in New York City.

Scholastic (NASDAQ:SCHL), producers of children’s reading materials–and one of the leading companies of student publications for schools around the world–just pulled a picture book about George Washington and his slaves.

Why? The reasons are ridiculous.

“A Birthday Cake for George Washington,” released earlier this month, was painted as “sentimentaliz[ing] a brutal part of American history,” the Associated Press reported. In other words, the problem was the pages showed happy slaves–a smiling Hercules and his daughter, Delia–cooking up a celebratory cake for their master and owner, Gen. Washington. And the publisher said in a statement: That image just doesn’t cut it.

“The book may give a false impression of the reality of the lives of slaves and therefore should be withdrawn,” Scholastic said.

Because slaves never smiled–never, never, not under any circumstances, ever? Okay. That’s a viewpoint. But this is a book for first-through-third graders. For that age, everybody smiles–including animals and inanimate objects. Some of them even dance. Can you say Disney’s Beauty and the Beast? (Imagine the outrage if the smiling slaves in “A Birthday Cake for George Washington” did that. Or, look at it the other way and imagine the outrage if the father-daughter enslaved duo were instead presented as bare-backed and downtrodden, with bloody red whip marks stretched wide across their skeletal torsos.)

Regardless, censorship in this instance is not only unfounded–they’re third-graders, for crying out loud. Plenty of time to instill their minds with the true horrors of slavery in grades four-through-12 and beyond. But, and this is true with all forms of censorship, it also presents a slippery slope.

Censor one book, what about another? That sort of thing. And in this case, the finger-pointing can indeed do a 180 and turn right back at the source, Scholastic.

What does a book about an 8-year-old boy named George who desperately wants others to see him as a girl, have in common with a cartoon-esque account of a Captain Underpants character who time travels to discover he’s gay? That’s right – they’re both published by Scholastic.

“The world’s largest publisher and distributor of children’s books is heavily promoting a pro-transgender book designed for students as young as third grade,” Life Site News wrote in September 2015, of “George,” by Alex Gino, an author who paints himself as a 20-year activist for “queer and trans” issues.

Got it. Except, of course, there’s this one little troublesome point with that rationalization. Censorship of such blatant and agenda-driven selectiveness reeks of Nazi Germany days.

In 1933, Goebbels drew a crowd of about 40,000 – most of whom hailed from the college and intellectual camps, those who thought they knew best how Germans ought to be raised and taught – for a massive book burning by bonfire, in order to, as he termed it, “clean up the debris of the past.”

How is that different from America’s current infatuation with cleaning up the debris of our slavery past, tearing down monuments of Robert E. Lee, pressing to remove statues of Thomas Jefferson, demanding to obliterate evidence of Lee, Jefferson Davis and Stonewall Jackson from Stone Mountain in Georgia? Now come the books – beginning with the elementary-level “A Birthday Cake for George Washington.”

Beware the slippery slope; America is not Germany, but for the grace of God and the sanity of her people, could very well one day be.