HomeOpinionHey, Vatican City: Why So Much Gold – So Few Refugees?

Hey, Vatican City: Why So Much Gold – So Few Refugees? 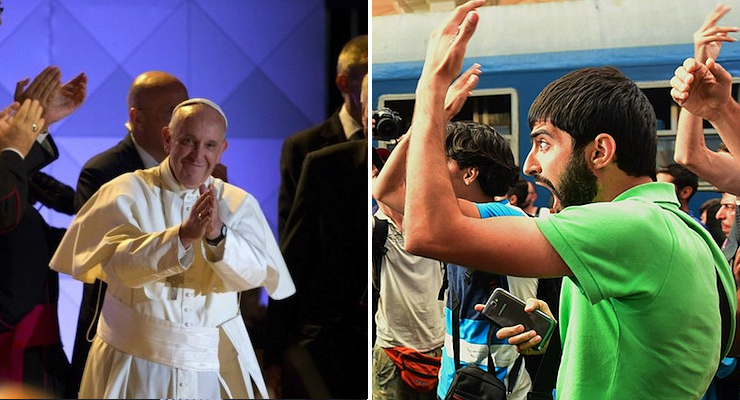 Pope Francis takes the stage at the Festival of Families in Philadelphia on Sept. 26, 2015, and a Syrian refugee yells at a Hungarian border guard. (Photos: AP/Alessandra Tarantino/Reuters)

In the next week or so, the Council of the European Union will meet to discuss how well its ongoing commitment to provide for the millions of Middle Eastern, Asian and African adult males and other migrants fleeing the likes of Syria has been going.

But let’s just cut to the chase. The bureaucrats in charge are going to conclude A) the European Union needs to do more and B) the United States needs to do more. What’s not going to be determined, however, is the need for any sort of first-person attachment to those conclusions.

Nope. That Price is Right “come on down” attitude has a boundary – and it weaves nicely along the border of Not In My Yard.

Politicians being politicians, nobody’s really surprised at their hypocrisy. Where it really nags, however, is in the religious realm. And where it’s really personified is in this continuing migrant crisis is in the pope, his church, and Vatican City.

Migrants are our brothers and sisters, in search of better lives, Pope Francis told the world, during a January address on Vatican Radio.

“Do unto others as you would have them do unto you,” he told the United States, during a September 2015 address on Capitol Hill.

“Behind these statistics are people, each of them with a name, a face, a story, an inalienable dignity which is theirs as a child of God,” he said in a November 2015 speech from Vatican City marking the 35th anniversary of the Jesuit Refugee Service, just days after a series of terror attacks rocked Paris and threatened to slow the flow of migrants into the area.

Noticeably absent during these speeches? Faces and photographs of the dozens of refugee families welcomed into Vatican City, the headquarters of the Roman Catholic Church and the home of the pope. The sovereign city-state sits on a 100-acre parcel of well-guarded, partly walled land by the Tiber River, and is home to some of the world’s most notable treasures, from art work to gold, as well as to the highly secretive – and highly profitable – Vatican Bank with untold amounts of assets and investments. Plenty of money to spend on provisions for these children of God, it would seem.

The world saw a glimmer of goodwill from the cloistered city when the pontiff, in a widely reported September 2015 address, called on every parish, monastery and religious community in Europe to take in a refugee family or two – and backed that call by vowing to house two such families in the Vatican. But weeks later, and the segregated city had only found one family worthy of welcome – and curiously enough, given the high Muslim population of the refugees, a Christian family belonging to the Melkite Catholic Church, at that. Within months, many of the Catholic Churches called by Pope Francis to do their moral duty and open doors to refugees abandoned the idea in seemingly similar fashion.

One can imagine the cry of the migrant standing outside one of the five armed-guarded doors that keep Vatican City secure: “Father, got a spare coin?”

It’s bad enough listening to politicians prattle on from tax-paid venues about the need to provide for the world’s suffering, before being escorted by armed officers to their chauffeured vehicles and dropped within the gates of their high-security homes. But having a religious leader wag moral fingers at the rest of us, from behind gilded screens and amid some of the world’s most precious of metals and treasures – from behind walls that protect this wealth from the riffraff of society – is just too much.

It’s unChristian, and it’s everything people hate about organized religion. But Jesus said it best, speaking to the money-lovers of the time: “Woe to you, teachers of the law and Pharisees, you hypocrites!”