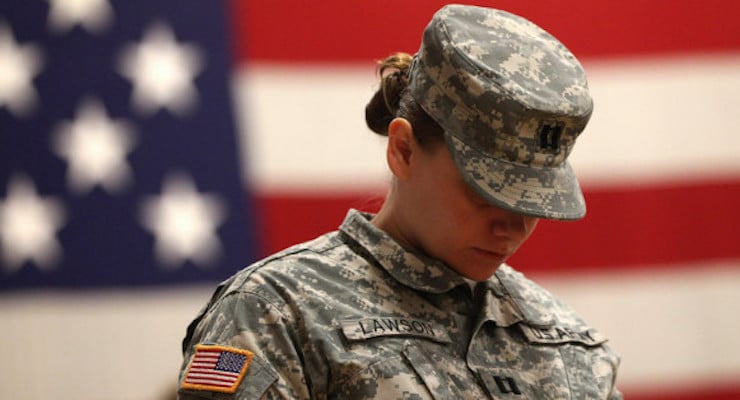 FORT CARSON, CO – NOVEMBER 10: A U.S. Army soldier bows her head in prayer at a welcome home ceremony for troops returning from Iraq on November 10, 2011 in Fort Carson, Colorado. More than 100 soldiers from the 549th Quartermaster Company, 43rd Sustainment Brigade returned after a seven-month deployment. They played a key role in removing excess equipment from Iraq as other troops withdrew from the region. (Photo by John Moore/Getty Images)

In the latest act of “Mikey Weinstein Takes on God” — the long-running theatrical performance of the Air Force Academy graduate and JAG Corps member who exits service, founds the Military Religious Freedom Foundation and then turns attack dog on all-things-religious in U.S. branches of service – we see a Protestant chaplain under fire for daring to describe a battlefield conversion to Christianity.

Once again, Weinstein shows why he’s an enemy of America’s freedoms, particularly the First Amendment – and not, as he puts it on his website, “the undisputed leader of the national movement to restore the obliterated wall separating church and state in the most technologically lethal organization ever created by humankind, the United States armed forces.”

The backstory is this: Air Force Capt. Christian Williams, who serves as a chaplain, helped cut a video for the Air Force Recruiting Service in which he explained why he viewed his role as “one of the most rewarding ministries in the world,” he said, as Military.com reported. About two-and-one-half minutes into the video, Williams then tells one of his personal stories of inspiration – one of the times during service that really struck home the importance of his chaplain role.

“Before I left Iraq,” Williams said in the video, “[this female airman] told me that ‘as a result of the example I saw you set … I have accepted Christ as my personal lord and savior.’ You can’t put a price tag on that.”

He says including the story of the airman who accepted Jesus in the video – which is five years old, by the way — violates the U.S. Constitution as well as Air Force prohibitions against military leaders proselytizing or promoting their personal religious beliefs.

Sharing a personal story about the power of Jesus is not the same as actively trying to convert someone to Christianity.

It’s also something that’s well within the boundaries of the freedom of speech clause in the U.S. Constitution.

But Weinstein’s little more than an anti-religion zealot and activist, and his crusade to rid the military of all-things-God has crossed well beyond the realm of logical, far into left-field zany – well into the danger zone for those who care about the fate of the First Amendment. What’s worse is Weinstein acts as if he’s a defender of religious freedoms, a stellar example we should all follow and support. Don’t be fooled. He’s a wolf in sheep’s clothing.

Well, there’s just one lesson to be learned from him and his latest attack against Williams, and one response to give, and that’s this: Americans, both of Christian faith and not, need to band together and fight his MRFF onslaughts, his personal persecutions against displays of religion and religious beliefs, his attacks on constitutional free speech, his false claims as a defender of a free country.

It’s not just a religious freedom issue – it’s a freedom of speech matter. And allowing people like Weinstein to decide what’s OK to say versus what isn’t would be a tragedy for our nation, our Constitution and our ability to exercise what Founding Fathers and early patriots fought so hard to ingrain into our politics and culture – and that’s the basic God-given right to speak one’s mind, regardless of who might take offense.