Free Condoms — What Could Go Wrong? 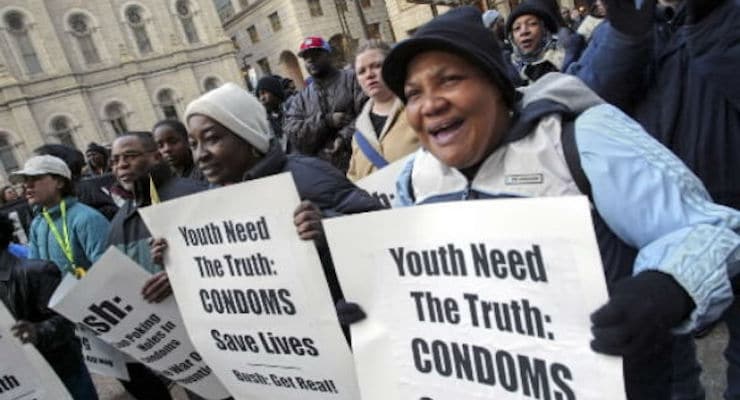 Remember when the left passionately insisted that public schools distribute free condoms to students on the bizarre theory that they were going to have sex anyway and we might as well make it safe? Well, the results are in, and the left isn’t looking too great.

When this nation was first experiencing the AIDS scare, liberals were adamant that we had to saturate the culture with condoms for teens to prevent the spread of the deadly disease. They ignored warnings that this massive giveaway program would publicly sanction and, thus, encourage teen promiscuity. They rejected reports that condoms are hardly fail-safe in preventing the spread of this disease.

They were not about to be deterred by such arguments because their single-minded focus was to distribute these condoms. They were certainly not moved by the moral argument that making condoms more available and showing students how to use them would increase sex.

The free-sex left has never been too concerned about the proliferation of teenage sex, which is one reason it irrationally opposes abstinence programs, even as part of a broader sex education curriculum. Who are we to judge whether kids have sex? Sex, after all, feels good, and feeling good is the endgame in our pursuit of happiness. Besides, if pregnancy occurs, it’s no big deal. The kids can just have an abortion, which, to the left, is a morally neutral act.

But can you imagine how cynical and hardened of heart you would have to be to be indifferent to the distribution of thousands of condoms to students — from nurses, counselors and vending machines — in school districts all over the country?

How about the argument that increasing (even “protected”) sex would increase pregnancies and also the spread of HIV? Don’t be silly. At the time, liberals cited isolated, localized studies concluding that increasing the availability of condoms to students would not increase sex — and certainly not pregnancy. They pooh-poohed valid concerns that condoms are not wholly reliable in preventing the transmission of the virus. But those truly interested in the science wouldn’t have relied on such a ridiculously small sampling of schools.

Though the left boasts about its overarching deference to science and empirical evidence, the reality is that for the left, politics trumps science. Like trial advocates, liberals present only evidence that supports their policy goal.

When their minds are set on a goal, dissenters must be passed over and even attacked. For example, with abortion on demand, evidence that abortion might cause physical and emotional damage to women must be ignored. In a classic case of projection, they charge anyone who cites such evidence with being motivated purely by politics.

The same thing is true with respect to their man-made global warming advocacy. They use fact-starved computer models to “prove” that dangerous warming is occurring. They distort surveys to legitimize their theories — such as their claim that vast majorities of scientists subscribe to their conclusions, willfully ignoring the thousands of scientists who disagree and all evidence that contradicts their theories.

Indeed, the left usually won’t give an inch when confronted with evidence that scientists in their camp have manufactured and doctored evidence and that scientists are pressured by their peers and grant monies to reach the “correct” conclusion. As they subscribe to an ends-justify-the-means philosophy, they’ll unapologetically dismiss such evidence and say it doesn’t matter anyway — because there is a scientific consensus on the question, so any distortion of the evidence is irrelevant. Never mind that there is no such consensus, and never mind that the very reason they manipulated their data is that the actual data didn’t support their theories.

As is so often the case with liberals, their real motives go beyond their public pronouncements. They refuse to consider information that counters their narrative because they believe that any limitation on their various crusades would produce a slippery slope that would ultimately result in the defeat of their goal. That’s why many liberals are so extreme on abortion that they even oppose the outlawing of partial-birth abortion. They substitute propaganda for rational argument and deceive the public about their true intentions, saying, for example, that they want to make abortion “safe, legal and rare” when they devote tireless hours ensuring that abortion is anything but rare.

Every once in a while, however, the left just can’t hide from the reality. A recently published study by the National Bureau of Economic Research reveals clear evidence that access to condoms in schools leads to a 10 percent increase in teen pregnancy and a rise in sexually transmitted diseases. Unlike the bogus studies the left relied on, this one involved thousands of schools.

Liberals are already tying themselves in pretzels to discredit this report, but once again, conservatives are vindicated. Liberals arrogantly depict conservatives as reality-challenged, but here again, that is nothing but projection from those who never let reality get in the way of their agenda.
[mybooktable book=”the-emmaus-code-finding-jesus-in-the-old-testament” display=”summary” buybutton_shadowbox=”true”]

Is Losing the Election Part of Trump's Plan?