No Time to Doubt: For Christians, It’s Donald Trump 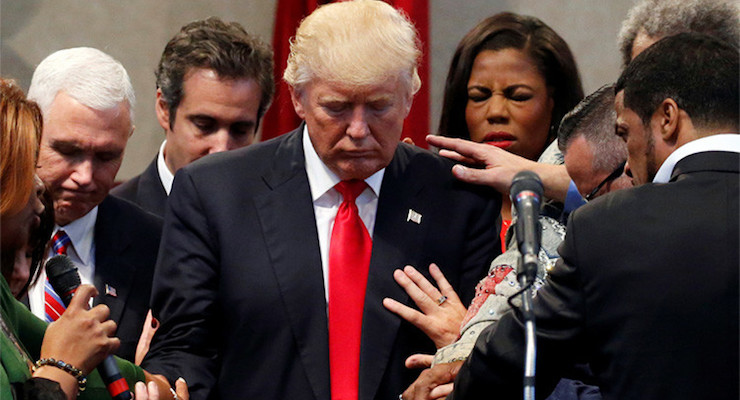 21 At that very time, Jesus cured many people of their diseases, illnesses, and evil spirits, and he restored sight to many who were blind. 22 Then he told John’s disciples, “Go back to John and tell him what you have seen and heard—the blind see, the lame walk, the lepers are cured, the deaf hear, the dead are raised to life, and the Good News is being preached to the poor.23 And tell him, ‘God blesses those who do not turn away because of me.’ ”

We truly live in perilous times. In Jesus’ day, it was even worse and more blatant than it is today, although we can see that sin is accelerating at a very fast pace.

Unfortunately, it (sin) has permeated our political system to the point it drives the direction of our country. I am reminded of the scripture in John 10:10 (KJV) “The thief cometh not, but for to steal, and to kill, and to destroy: I am come that they might have life, and that they might have it more abundantly.” Sin is a thief! Sin is selfish and cares nothing more than its self-seeking desire to satisfy the flesh. Sin also blinds its victim’s to the truth.

But God most certainly wants a different outcome for mankind, the apple of his eye. So much so, that he sent His very own Son to die for us. So, we have choices to make in life. This morning, during my morning thoughts with The Lord, I felt these words coming forth, “You can be part of the problem or you can be part of the solution.”

The challenge with choosing the right path in any course life takes us, are the voices that speak at you. You have relatives, friends, teachers, acquaintances, newspapers, TV, Internet, Facebook, Twitter, Instagram and the list goes on. The Roman officer in Mark 15:39 had all of the powerful Roman culture working against him. To their polytheistic mindset (belief in many gods), Jesus’ claim of being The Son of the true and living God boggled their thinking. They were deceived by familiarity. But something happened as Jesus took His last breath to change his mind. Was it the spirit leaving his body? Keep in mind that this man had witnessed many such deaths, yet the death of Jesus on the cross shook his thinking and he believed that He was indeed the Messiah! How sad that he could not recognize the correct path before-hand, so that he could have experienced His life giving message.

In the case of John The Baptist (Jesus’ cousin), we see doubt arise even though he baptized Jesus himself, and heard God The Father first hand say, “This is my Son, in whom I am well pleased!” He sent some followers to ask Jesus, “Are you the Messiah we’ve been expecting, or should we keep looking for someone else?” Wow, what a difference in belief in 3 short years. How quickly we forget important things that can make the difference in being part of the solution. But the influence around us has an uncanny ability to move us off course.

A political twist to all this is evident. As I see the bombardment of accusations flying back and forth from both sides, the tactics by the Democratic Party stand out as being very similiar–obvious lies. But the release of videos revealing party operatives stealing votes sheds light on long-time accusations and our worst fears for our Republic have been realized.

In Pentecostal circles we have a saying, “your sin will find you out.”

This is serious. Now, more than ever before, we all need to be part of the solution. As a citizen of the greatest Republic on planet Earth, I am outraged that votes are being compromised by dead people, illegal aliens and election manipulators.

From a political standpoint, the Roman officer wasn’t allowed to receive the truth of Christ, his government forbid it. For John The Baptist, the religious sects drove doubt into his heart about the truth, theology confused him.

Now is not the time to doubt or be confused about the right choice. We need someone unbound by political special interest, someone who has the best interests of America in his heart.

So don’t let the rhetoric of accusations throw you off course. Choose the path of the Roman officer, but make the revelation before November 8th and let’s make America great again!

No, Bill Clinton Did Not Call Obamacare 'Crazy'

A Presidency From Hell?