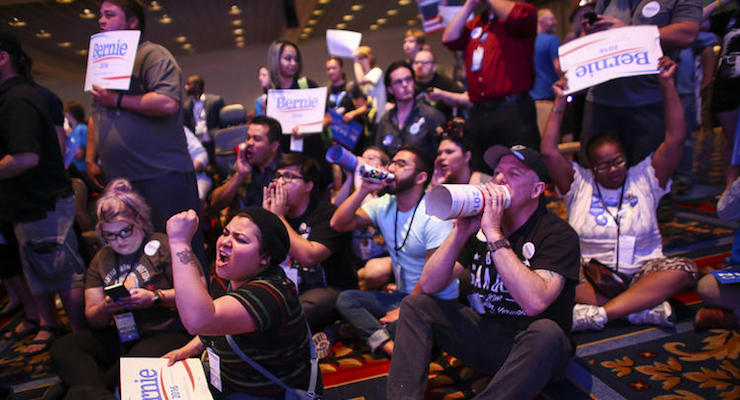 In a Saturday, May 14, 2016 photo, supporters of Democratic presidential candidate Bernie Sanders, igather in the front of the room during the Nevada State Democratic Party’s 2016 State Convention at the Paris hotel-casino in Las Vegas. (Photo: AP)

But some of us were unable to fight off these worrisome teachings.

Lies were taught in our history classes, revisions the elite wanted us to know about our history–even though they’re lies–we were fed. Much of what we were taught was designed to elicit an emotional response, get us upset. A lot had to do with race. Teachers would get reprimanded if they taught outside of the book. Students would also be told to stop telling the truth. I was a sophomore in high school when my favorite history teacher warned me to never tell what I knew about the history he was teaching because we, both, would get in trouble.

I had to keep quiet on topics including World War II, the Romanovs and the Vietnam War as not to expose the lies to my classmates. We were taught that socialism is great and capitalism is our enemy. They taught us that every person has the right to “good education, healthcare, food and housing.”

Most of us grew up believing these things, thus, when it came our time to vote, many chose the socialist. It makes sense. Most of us knew nothing but socialism.

It was very easy to do this because they had been laying the groundwork for years. They destroyed the family structure in America by making it near impossible for a family to live off the wages of a parent’s single job, the model for families in the previous generations. Most of my peers grew up with only one parent who were constantly working and were never there for their children.

Even in two-parents households, neither had time to be parents to their kids, leaving the state in charge of teaching their children. That may be a big belief among communists and socialists, but it didn’t work out too well for us Millennials.

There were some of us who had it different, like myself.

Yes, my parents worked. But they always tried to make time for us. My father always taught me to ask questions, to never believe anything until you research and not to believe everything that the schools teach–to teach myself. I was very lucky, because it helped me not to get caught up in the narrative that most of my generation is caught up in.

The elites then started to pay the Millennial generation to do things like riot, post inaccurate information, to troll, to accuse and more. This has also been in the making for years, as well. They sent us to school and put us in debt. They lowered wages and increased living costs. They basically made it easy for us us to be broke. So, when we’re told there is money to be made in something you can take your anger out on, some of us jump at the opportunity.

As a result, millions of dollars in damages, tragic deaths and a generation who will do anything for money.

Millennial have been taught that you are a racist, a bigot, etc. if you don’t believe the left’s ideas and narrative. Now, some of us are repeating everything that we were taught. When some of us don’t get our way or we don’t agree with another person, particularly one who holds conservative views, we immediately pull the race card or worse. We were taught to bully, shame and race-bait to scare people like myself into silence.

Silencing everyone who doesn’t agree with the left’s agenda is now the new normal. If you are CIS (cisgender), white, straight, male or female and conservative, you are now the enemy. You are what is wrong with society and this country.

The left allegedly wants everyone to be equal, but only if you are a minority, LGBTQ, another protected class and a liberal are to afforded equality. You could be black and conservative and the “social justice warriors” on the left will decide what your race is based on your political views.

How is this not racist in itself? How is attacking those who are white ok? To a rational mind, it is not ok. It is indeed racist.

Yelling, cursing, name-calling, destroying lives, towns and personal property, and even killing people will only make others less likely to listen to grievances, even when they are valid. How could someone want to help, to empathize if they are told everything is their fault, particularly when it isn’t?

So where did the Millennials go wrong? Was it really us, or was it the elites and government who did this to us? What would we if they had not targeted our generation? We could imagine the answers to the last two questions, but one thing is for certain–more of my generation must wake up in order for us to make the world a better place.

Arianna is a conservative, freelance journalist who frequently writes commentary exposing the truth surrounding the Millennial generation, politics and health. She is the owner and purveyor of the <a href="//themillennialpatriot.blogspot.com/"><b>Millennial Patriot</b></a>, a blog which focuses on politics and other topics currently impacting the world. She is also an author living in Portland, Oregon, working on her first book series.