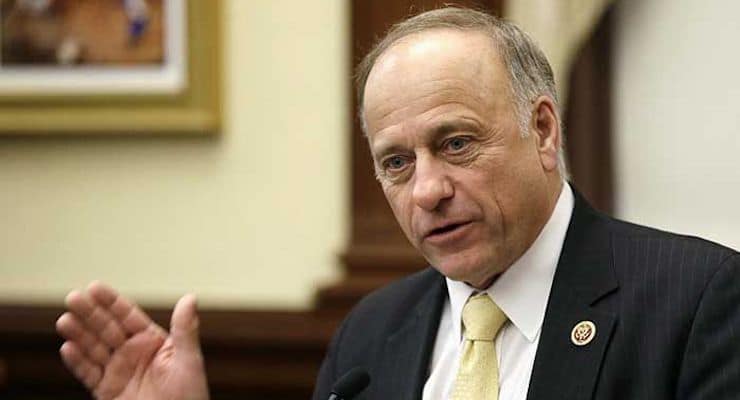 Rep. Steve King, R-Iowa, a favorite punching bag for the left, came under political attack this week after tweeting about immigration’s impact on “culture and demographics.” Backpedaler-in-chief House Speaker Paul Ryan, R-Wis., said he hoped Rep. King misspoke, while others immediately called him a racist.

The tweet was in response to reports of Muslim migrants screaming “Allahu Akbar” in the streets of the Netherlands as tension continues to build ahead of their insurgent election. Geert Wilders, a populist nationalist leader of the Party for Freedom (PVV), has overcome nearly all established parties in the polls. Now, with one day before voters choose a new government, he and the PVV are surging against the People’s Party for Freedom and Democracy (VVD), led by Prime Minister Mark Rutte.

Rep. King tweeted Mr. Wilders “understands that culture and demographics are our destiny.”

Wilders understands that culture and demographics are our destiny. We can’t restore our civilization with somebody else’s babies. https://t.co/4nxLipafWO

Rep. King defended his tweet on “Tucker Carlson Tonight,” stating flat-out that he did not misspeak.

“All of western civilization has gone down below the replacement rate [of population]… with the exception of Israel,” he said, adding that the “vacuum” created would “be filled by people who don’t believe in our values here in Western civilization.”

“A nation-state needs to have a sense of a common history and common culture,” he said, pointing to recent public demonstrations “pushing back against American civilization.”

Here’s the bottom line. Nothing Rep. King tweeted or subsequently said in the interview with Tucker was racist and, indeed, both the premise and conclusion of his argument are widely accepted within the academic community.

In the 20th century, the demand for assimilation was considered common sense. Even progressive heroes understood the basic need to assimilate immigrants, including Teddy Roosevelt.

While “it is an outrage to discriminate against any such man because of creed, or birthplace, or origin,” President Roosevelt said in 1907, “this is predicated upon the person’s becoming in every facet an American. There can be no divided allegiance here. Any man who says he is an American, but something else also, isn’t an American at all.”

Yet, the globalist left first vehemently challenged the definition of nationalism and even its very existence. Let’s take a look at why before coming back to Rep. King.

The untold casualty of the great wars of the 20th century, particularly World War I, was socialist theory as a sound intellectual school of thought. European socialists in Germany and France prior to the war believed in a “spontaneous harmony of interests” among the various proletariat parties in each country, which in their view, would put the common aspirations of all socialists above individual nationalism.

They were wrong. Kenneth Waltz, an international relations scholar and father of defensive realism, correctly argued in Man, the State and War, the harmony of interests and common aspirations “quickly broke down” as “each socialist party found itself bound to its national state by ties of emotional and material interest.”

In other words, nationalism is more powerful than ideology.

“The theory of nationalism represents Marxism’s great historical failure,” Tom Nairn, the heir to the Marxist school of social science painfully admitted in The Break-up of Britain. Nairn’s admission is important because most globalists who demonize nationalists understand this is true. They understand they will continue to lose the argument at the ballot box and in academia until they change the very national identities of western cultures.

Nationalism, or the concept of nation, has proven difficult to define–yet, much to the chagrin of statists–exists nonetheless. For the Left, it has proven far more difficult to defeat. As someone who has researched extensively and help define it, perhaps with and in more detail than any other before me, I think that’s has been particularly true of their effort to change the American national identity.

In What is a Nation?, British-born philologist and historian Ernest Renan added religion, economy and geography to a list already including language to define a nation. If these sound familiar it is because the preservation of these things are central tenets in President Donald Trump’s platform and, subsequently, the justification for the candidacy of Mr. Wilders.

The left’s academic response to the traditional definition of “nation” was to simply argue that it does not exist. That is, until Benedict Anderson wrote Imagined Communities, which without challenge determined nations–even if “imagined”–are still very, very real. Anderson is now considered the academic authority on the concept of nation.

But equally real is the danger of a nation “forgetting” what binds them, losing the “memory” of their shared sense of glory and/or suffering. In America, that danger comes from the left’s insistence we stop thinking of ourselves as a “melting pot” and replace our identity with a “mosaic,” despite all the chaotic cultural and political internal contradictions that follow.

With that being understood, it’s easy to see how all of this is relevant to what Rep. King was trying to convey.

In most developed countries, such as the U.S., a fertility rate below approximately 2.1 children per woman cannot sustain a nation’s cultural identity. Currently, the U.S. fertility rate is around 1.88. The replacement rate is as high as 3.4 in third-world and developing nations due to higher mortality rates.

What President Trump, Mr. Wilders and Rep. King are pointing out is that it is a mathematical certainty for citizens’ cultures, values, political and economic systems to be “forgotten” and replaced with a new national “memory” that doesn’t at all resemble what it is now. This stand has earned them their political successes simply because most citizens in America and other nations in western Europe want to preserve their identities. That’s not because they’re bad people. It’s because they love and cherish them.

That doesn’t make them racist, nativist, Islamophobic or xenophobic. Hell, it doesn’t even make them wrong. Ultimately, whether or not citizens of any nation want to willingly replace their own identities with another–particularly with one that isn’t conducive to freedom and hasn’t produced prosperity–is their right, and a debate worth having.

A 50-Day Report Card on the Trump Presidency