The progressive left who are staunch opponents of Texas’ SB 5, which bans abortions after 20 weeks, are in an uproar that is showing their true extremism as it pertains to the issue of abortion.

The Republican-controlled Texas House of Representatives approved on Monday sweeping restrictions on abortions, including a ban on most after 20 weeks of pregnancy and stricter standards for abortion clinics.
If the bill gets to Gov. Perry and becomes law, Texas could become the 13th state to pass a 20-week ban.

Although the left had assembled 600 or so protestors, as usual, the media narrative and stories coming from organizations such as Think Progress is beyond misleading – it is extremism. As I noted earlier, as a result of voting “Nay” on a similar bill passed in the House of Representative, Democrats in “toss-up” and otherwise competitive races will be targeted, which may very well mean their electoral demise.

The reason is very simple. Americans, especially in light of the Kermit Gosnell trial, are now once again a majority pro-life people. And furthermore, the groups and individuals in opposition to Texas SB 5 are way far to the left of the American mainstream on this issue.

During the Kermit Gosnell case, abortionists were frantically attempting to paint Doctor Gosnell as the exception, but Americans were not buying it. Now, they will just flat-out stoop to lying in order to try to wrestle control of this issue back from the moral grounds it rightfully landed on after the national spotlight of the trial.

Also as I noted earlier, Americans’ views on abortion is very much dependent on circumstance. Unlike the progressive narrative, the truth is that SB 5 would allow exemptions for abortions to save a woman’s life and in cases of severe fetal abnormalities. In a completely unethical depiction of the dynamic of the debate, Tara Culp-Ressler of Think Progress wrote:

Republicans cut off the ongoing debate so they could finally force a vote, a decision that the Associated Press characterized as a “highly unusual and partisan move.” SB 5 won preliminary approval with a 97-33 vote.

That is just factually incorrect and completely pathetic. For now, unless of course they get their way on immigration and Texas ends up just as California did after the 1986 amnesty bill, Texas is a red state – very red. Despite the Obama campaigns effort to take Texas, Battleground Texas, Obama still lost the Lone Star State by 16 points. At the time of her pathetically misleading article that was absent of reality, the Texas Senate had passed the bill by a margin of 97 – 33.

Furthermore, the “massive protests” amounted to 600 far left progressive activists, while just as many pro-life activists showed up to support SB 5. Thousands upon thousands of Americans across the political spectrum showed up on the steps of the Capitol to protest the ramming through of Obamacare. Yet, the president, Nancy Pelosi and Harry Reid, all had little to no concern for the voices of the American people, whom of which to this day oppose Obamacare by a margin of 52 – 40, according to the latest RCP average.

The fact of the matter is that Americans are wising up to the practice of abortion, and despite replacing the reality of killing a 5 – 6 month of baby with the cold and heartless 20 “week” term, it just isn’t working anymore. Because of the increased education among the public, the “pro-choice” designation, which is disgusting misleading in and of itself, has experienced an evaporation of their once 23% margin and now remains the minority.

The vote in the House was 95-34, but again mostly along party lines because Texas is overwhelmingly Republican, which is more in line with mainstream American than the extremist progressive left. The House gave the measure preliminary approval earlier on Monday by a vote of 97-33. The measure now returns to the Senate, which has passed a version of the bill that does not even include a 20-week ban.

Again, another lie incessantly cited by so-called women’s rights activists desperate to wrestle the narrative back in favor of a losing argument. 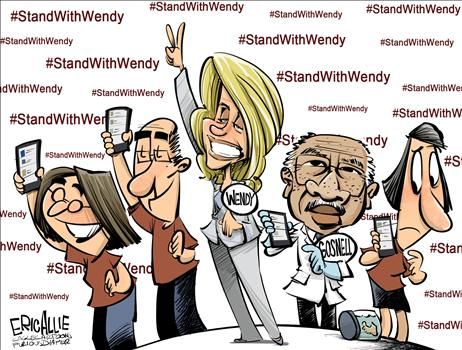 Read Rich’s response to the liberal critics on this and other articles on abortion, which outlines the realities of the abortion industry, click here to read “Support for Abortion Decreases, But Ignorance in Support of Abortion is Strong”