HomePolicyWhy The VAT May Seem Good In Theory, But Is Bad In Reality

Why The VAT May Seem Good In Theory, But Is Bad In Reality 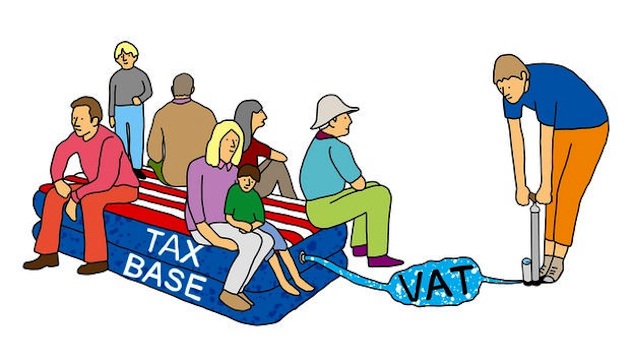 I warned just last week about the dangers of letting politicians impose a value-added tax. Simply stated, unless the 16th Amendment is repealed and replaced with a new provision forever barring the re-imposition of any taxes on income, a VAT inevitably would be a new source of revenue and become a money machine to finance ever-larger government.

Just look at the evidence from Europe if you’re not convinced.

That’s why the VAT is bad in reality.

Now let’s talk about why the VAT (sometimes called a “business transfer tax”) is theoretically appealing.

First and foremost, the VAT doesn’t do nearly as much damage, per dollar raised, as our current income tax. That’s because the VAT is a single-rate tax (i.e., no class warfare) with no double taxation of income that is saved and invested.

In some sense, it’s a version of the national sales tax, except the revenue is collected on the “value added” at each stage of the production process rather than in one fell swoop when consumers make their purchases.

In other words, the bottom line is that it is good (or, to be more accurate, less bad) to have a tax system with a low rate and no double taxation. And in the strange world of public finance economists, a system with no double taxation is called a “consumption-base tax.” And the flat tax, sales tax, and VAT all fit in that category.

So why, then, if supporters of limited government prefer a consumption-base tax over the internal revenue code, is there so much hostility to a VAT?

The answer is simple. We don’t trust politicians and we’re afraid that a VAT would be an add-on tax rather than a replacement tax.

Which explains why it’s better to simply turn the existing tax code into a consumption-base tax. After all, the worst thing that could happen is that you degenerate back to the current system.

But if you go with a VAT, the downside risk is that America becomes France.

There’s a story in today’s Wall Street Journal that illustrates why consumption-base taxation is both a threat and opportunity. Here are some introductory excerpts.

U.S. lawmakers on both sides of the aisle increasingly are finding appeal in an ambitious concept for overhauling the nation’s income-tax system: a tax based on consumption, a tool long used around the world. …As the name implies, consumption-style taxes hit the money taxpayers spend, rather than income they receive. One prominent feature of consumption systems is that they generally tax savings and investment lightly or not at all. That, in turn, encourages more investment and innovation, and ultimately more growth, many economists contend.

The reporter is wrong about consumption systems, by the way. Income that is saved and invested is taxed.

It’s just not taxed over and over again, which can happen with the current system.

But he’s right that there is bipartisan interest. And he correctly points out that some politicians want an add-on tax while others want to fix the current system.

The tax-writing Senate Finance Committee is giving new consideration to the consumption-tax idea with the hope that its promised boost to economic growth would ease the way to a revamp. …Some of these proposals would have consumers pay another tax in addition to existing state and local sales taxes, while others would merely reshape the current system to tilt it more toward consumption. …Enactment of a broad-based federal consumption tax would align the U.S. with a global trend.

A Democratic Senator from Maryland wants to augment the current tax code by imposing the VAT.

While some GOP Senators want to modify the current system to get rid of most double taxation.

Republicans on the working group also are interested in the concept, including a proposal put forward recently by GOP Sens. Marco Rubio of Florida and Mike Lee of Utah. That plan would make several changes to the tax code that would move the nation closer to a consumption-based system. …Many GOP members “believe that there are economic benefits to moving away from taxation of income and toward taxation of consumption,” a Senate aide said.

Some liberals are concerned that consumption taxes affect poor people disproportionately, while unduly benefiting the rich, unless adjustments are made. For their part, conservatives fear that some types of consumption tax—particularly value-added taxes—would make it too easy to dial up government revenue collection.

So what’s the bottom line? Is it true, as the headline of the story says, that “Proposals for a consumption tax gain traction in both parties”?

Yes, that’s correct. But that’s not the same as saying that there is much chance of bipartisan consensus.

This doesn’t mean we shouldn’t worry about the prospect of an add-on VAT. As I warned last year, there are some otherwise sensible people who are sympathetic to this pernicious levy.

Which is why I repeatedly share this video about the downside risk of a VAT.