The Real Beneficiaries Of The Death Tax 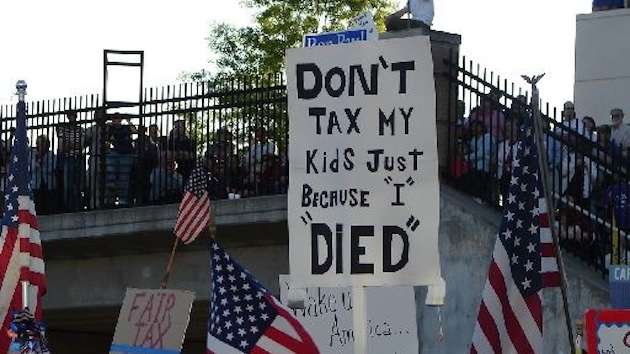 Sen. Chuck Grassley, R-Iowa, is a lead co-sponsor of the legislation by Sen. John Thune, R-S.D., the Death Tax Repeal Act of 2015.

Who benefits most from the death tax? There are two obvious answers. First, politicians presumably benefit since they get more money to spend.

Yes, it’s true that the tax discourages capital formation and may actually lose revenue in the long run, but politicians aren’t exactly famous for thinking past the next election cycle.

Second, there are some statists who are motivated by envy and resentment. These are the folks who make class-warfare arguments about the death tax being necessary to prevent the “rich” from accumulating more wealth, even though evidence shows large family fortunes dissipate over time.

Both of those answers are correct, but they don’t fully explain why this pernicious levy still exists.

Tim Carney of the Washington Examiner has a must-read piece for the American Enterprise Institute. He reveals the groups that actually are spending time and money to defend this odious version of double taxation.

…about two-thirds of Americans tell pollsters that they oppose the death tax. …But some segments of the population feel differently — most notably, the estate-planning industry. A survey by an industry magazine in 2011 found that 63 percent of estate-planning attorneys opposed repeal of the estate tax. That’s fitting. The death tax forces people to engage in complex and expensive estate planning. Lobbying disclosure forms show that the insurance industry is lobbying on the issue these days. The Association for Advanced Life Underwriting, which represents companies that sell estate-planning products, lobbied on the issue last year, as it has for years. Last decade, AALU funded a group called the Coalition for America’s Priorities, which attacked estate tax repeal as a tax break for Paris Hilton. …When the estate tax was last before Congress, the life insurance industry revved up the troops, spending $10 million a month on lobbying in the first half of 2010. In that stretch, only three industries spent more, according to data from the Center for Responsive Politics.

I concur with Tim.

Indeed, I remember giving a speech back in the 1990s to a group of estate-planning professionals. In my youthful naiveté, I expected that these folks would very much appreciate my arguments against the death tax.

Instead, the reception was somewhat frosty.

Though not nearly as hostile, I must confess, as the treatment I got when speaking about the flat tax to a group of tax lobbyists for big corporations.

In both cases, I was surprised because I mistakenly assumed that my audiences actually cared about the best interests of their clients or employers.

In reality, they cared about what made them rich instead (economists and other social scientists call this the principal-agent problem).

But I’m digressing. Let’s look at more of Tim’s article. He cites the Clintons to make a key point about rich people being able to avoid the tax so long as they cough up enough money to the estate-planning industry.

Those same techniques, however, often are not available to farmers, small business owners, and others who are victimized by the levy.

The Clintons may be stupid-rich, but they aren’t stupid — they’re using estate-planning techniques to avoid the estate tax. Bloomberg News reported in 2014 that the Clinton family home has been divided, for tax purposes, into two shares, and those shares have been placed in a special trust that will shield Chelsea from having to pay the estate tax on the full value of the home when she inherits it. Also, the Clintons have created a life insurance trust — a common tool wealthy people use to provide liquidity for heirs to pay the estate tax. The Clintons’ games, and the estate-planning industry’s interest in the tax, highlights how the tax fails at its stated aims of preventing the inheritance of wealth and privilege. Instead, the estate tax forces the wealthy to play games in order to pass on their wealth. These games don’t add anything to the economy, they just enrich the estate-planning industry. Those whose wealth is tied up in a small or medium-sized business, on the other hand, aren’t always capable of playing the estate planning games. They’re the victims.

The bottom line is that the tax should be abolished for reasons of growth.

But it also should be repealed because it’s unfair to newly successful entrepreneurs, investors, and business owners, all of whom generally lack access to the clever tax-planning tools of those with established wealth.

And it should be repealed simply because it would be morally satisfying to reduce the income of those who benefit from – and lobby for – bad government policy.

P.S. The U.S. death tax is more punitive than the ones imposed by even France and Venezuela.

P.P.S. It’s particularly hypocritical for the Clintons to support the death tax on others while taking steps to make sure it doesn’t apply to them.

P.P.P.S. In a truly repugnant development, there are efforts in the U.K. to apply the death tax while people are still alive.

P.P.P.P.S. On a more positive note, a gay “adoption” in Pennsylvania helped one couple reduce exposure to that state’s death tax.

P.P.P.P.P.S. If you live in New Jersey, by contrast, the best choice is to move before you die.

In Left’s Orwellian World, Taxpayers Who Get To Keep Their Income Are Getting 'Handouts'