Even IRS Admits the Tax Code is Biased Against Successful Taxpayers 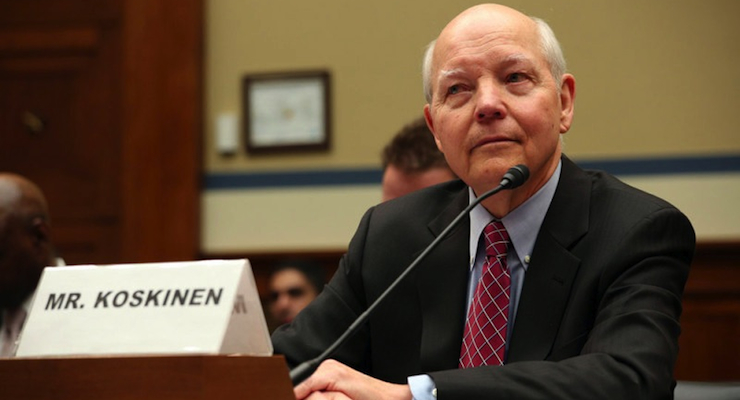 When I debate class warfare issues, here’s something that happens with depressing regularity. I’ll cite research from a group like the Tax Foundation on how an overwhelming share of the income tax is borne by upper-income taxpayers.

The statist I’m arguing with will then scoff and say the Tax Foundation is biased, thus implying that I’m sharing bogus data.

I’ll then respond that the group has a very good reputation and that their analysis is directly based on IRS data, but I may as well be talking to a brick wall. It seems leftists immediately close their minds if information doesn’t come directly from a group that they like.

So I was rather happy to see that the Internal Revenue Service, in the Spring 2015 Statistics of Income Bulletin, published a bunch of data on how much of the income tax is paid by different types of taxpayers. 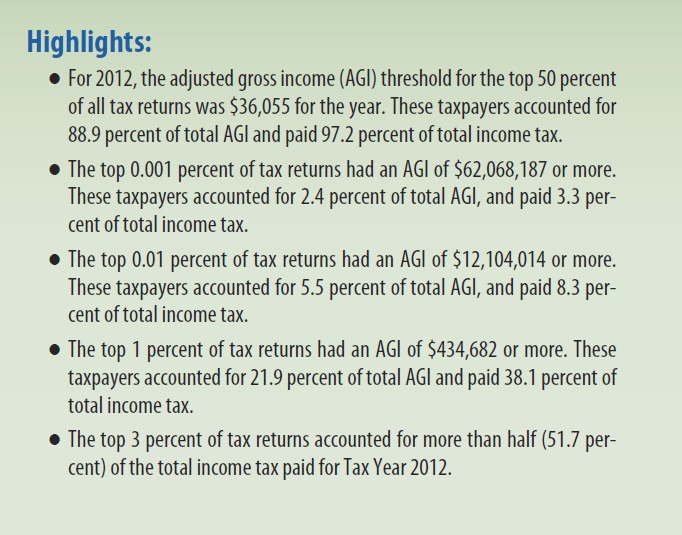 There’s a famous saying, generally attributed to Daniel Patrick Moynihan, that “Everyone is entitled to his own opinion, but not his own facts.”

With this in mind, I’m hoping that this data from the IRS will finally put to rest the silly leftist talking point that the “rich” don’t pay their “fair share.”

This doesn’t mean, by the way, that the debate about policy will be settled.

Getting statists to accept certain facts is just the first step.

But once that happens, we can at least hope that their minds will be opened to subsequent steps, such as understanding the economic impact of punitive tax rates, recognizing that high tax rates won’t necessarily collect more revenue, or realizing that ordinary workers suffer when harsh tax policies reduce economic vitality.

Though I’m not holding my breath and expecting miracles. After all, some leftists openly state that they don’t care if the economic damage of high tax rates is so significant that government doesn’t collect any tax revenue.

You can see an example of one of these spite-motivated people at the 4:20 mark of the video I narrated on class-warfare taxation.

P.S. Shifting to another tax topic, some of you may have heard about the massive data breach at the IRS. Here’s some of what CNN is reporting.

The Internal Revenue Service believes that a major cyber breach that allowed criminals to steal the tax returns of more than 100,000 people originated in Russia, Rep. Peter Roskam confirmed to CNN on Thursday. …The IRS announced Tuesday that organized crime syndicates used personal data obtained elsewhere to access tax information, which they then used to file $50 million in fraudulent tax refunds.

I suppose I could use this opportunity to take a few potshots at the IRS, but there’s a far more important issue to raise.

I’m guessing the IRS probably has the best computer security of any tax bureaucracy in the world. Yet even all the IRS’s expertise couldn’t stop hackers from obtaining sensitive information.

Now let’s contemplate something truly frightening. The Obama Administration wants the United States to be part of an OECD pact that obligates participating nations to promiscuously share information with dozens of other governments, including untrustworthy, hostile, and/or corrupt regimes such as Russia and China, not to mention make information available to jurisdictions that presumably will have very little technical capacity to guard data from hackers and identity thieves. Here’s the list of participating nations on the OECD website, and it includes Azerbaijan, Cameroon, Greece, Indonesia, Mexico, Nigeria, Romania, Saudi Arabia, and Ukraine.

Yet none of this reckless endangerment would be an issue if we had a simple territorial tax system like the flat tax. Under such a simple and fair system, only income inside America’s borders would be taxed (unlike the wretched system of worldwide taxation we have now), so there would be no need to have risky information-swapping deals with dodgy foreign governments.

P.P.S. Senator Rand Paul is one of the few lawmakers fighting to protect Americans from having their information shared with foreign governments.

P.P.P.S. Shifting back to the original topic of class-warfare taxation, here’s a lesson on the Laffer Curve I offered to President Obama.