When I make speeches about fiscal policy, I oftentimes share a table showing the many nations that have made big progress by enforcing spending restraint over multi-year periods.

I then ask audiences a rhetorical question about a possible list of nations that have prospered by going in the opposite direction. Are there any success stories based on tax hikes or bigger government?

The answer is no, which is why I’ve never received a satisfactory answer to my two-part challenge, even if I limit the focus to fiscal policy.

And nobody will be surprised to learn that the fiscal crisis in Puerto Rico reinforces these lessons.

Writing for the Wall Street Journal, Daniel Hanson explains that the American territory in the Caribbean is on the verge of default.

As Puerto Rico struggles under the weight of more than $70 billion in debt, it has become popular to draw parallels with Greece.

The one theme that is common with the two jurisdictions is that their fiscal crises are the result of too much government spending.

How bad is the problem in Puerto Rico?

It’s hard to answer that question because government budgeting isn’t very transparent and the quality and clarity of the numbers that do exist leaves a lot to be desired.

But I’ve done some digging (along with my colleagues at Cato) and here’s some data that will at least illustrate the scope of the problem.

First, we have numbers from the World Bank showing inflation-adjusted (2005$) government consumption expenditures over the past few decades. As you can see, overall spending in this category increased by 100 percent between 1980 and 2013 (at a time when the population increased only 12 percent).

In other words, Puerto Rico is in trouble because it violated the Golden Rule and let government grow faster than the private sector over a sustained period (just like Greece, just like Alberta, just like the United States, etc, etc). 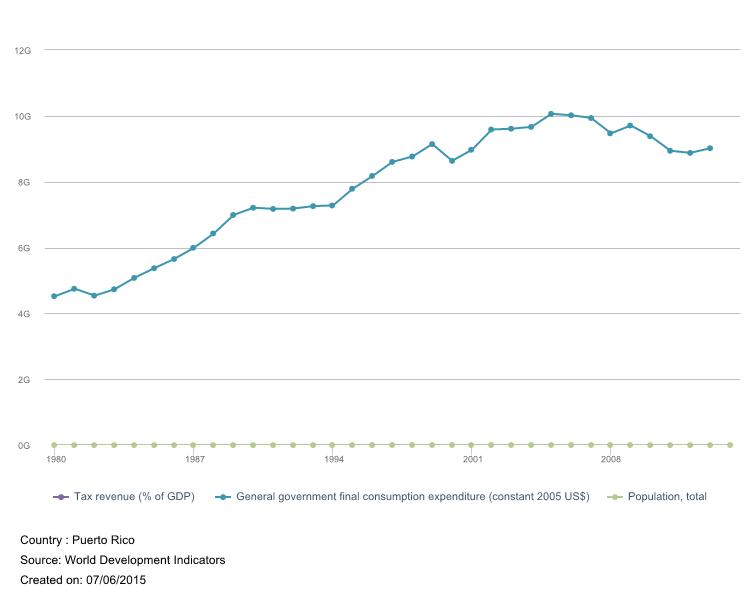 Here’s another chart and this one purports to show total outlays.

The numbers aren’t adjusted for inflation, so the increase looks more dramatic. But even if you consider the impact of a rising price level (average annual increase of about 4 percent since the mid-1980s), it’s obvious that government spending has climbed far too fast. 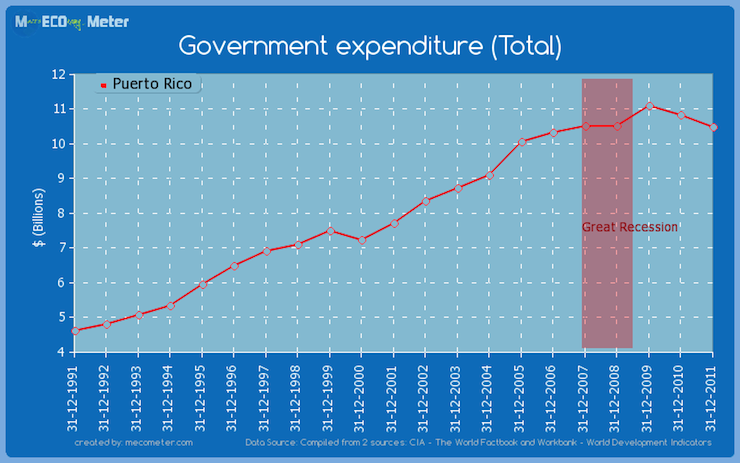 To be more specific, Puerto Rico has allowed the burden of government to rise much faster than population plus inflation.

A government can get away with that kind of reckless policy for a few years. But when bad policy is maintained for a long period of time, the end result is never positive.

Now that we’ve established that Puerto Rico got in trouble by violating my Golden Rule, what’s the right way of fixing the mess? Is the government responding to its fiscal crisis in a responsible manner?

Not exactly. Like Greece, it’s too beholden to interest groups, and that’s making (the right kind of) austerity difficult.

Indeed, Mr. Hanson says there haven’t been any cuts in the past few years.

In the past four years, when the fiscal crisis has been most severe, four successively larger budgets have been enacted. The budget proposed for the coming year is $235 million larger than last year’s and $713 million, or 8%, higher than four years ago. Austerity this is not.

What special interest groups standing in the way of reform?

The government workforce would be high on the list. One of the big problems in Puerto Rico is that there are far too many bureaucrats and they get paid far too much (gee, this sounds familiar).

Here are some details from Mr. Hanson’s column.

…more than two-thirds of the territory’s budget is payroll. The proposed budget…contains no plans for head-count reductions. …Median household income in Puerto Rico hovers around $20,000, according to the U.S. Census Bureau, but government workers fare much better. Public agencies pay salaries on average more than twice that amount, a 2014 report from Banco Popular shows. Salaries in the central government in San Juan are more than 90% higher than in the private sector. Even across comparable skill sets, the wage disparity persists.

In other words, life is pretty good for the people riding in the wagon, but Puerto Rico doesn’t have enough productive people to pull the wagon.

So we’re back to where we started. It’s the Greece of the Caribbean.

P.S. This column has focused on fiscal policy, but it’s important to recognize that there are many other bad policies hindering prosperity in Puerto Rico. And some of them are the result of Washington politicians rather than their counterparts in San Juan. Nicole Kaeding and Nick Zaiac have explained that the Jones Act and the minimum wage are particularly destructive to the territory’s economy.