The (Attempted Tax) Seduction of Jeb! 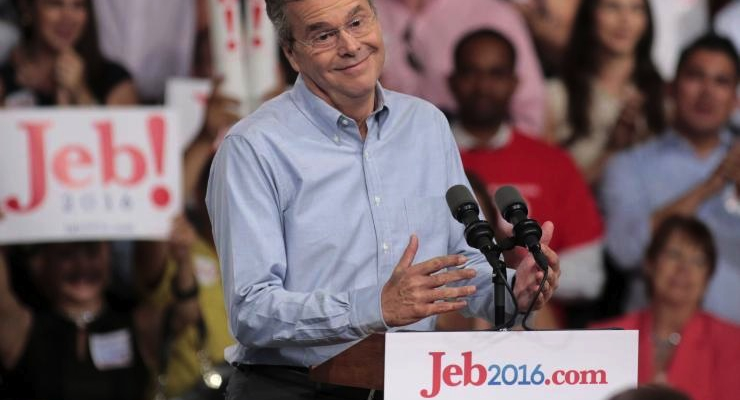 If you took a poll of Washington’s richest and most powerful people, you would probably find more than 90 percent of them support tax increases. At first glance, this doesn’t make sense. Why would a group of upper-income people want tax hikes? Are they self-loathing and guilt-ridden?

Perhaps, but there’s a better explanation. These are people whose lavish lifestyles are because of big government. And when government gets even bigger, they have more chances to obtain unearned wealth. So it makes perfect sense for them to support tax increases. They may send an additional 5 percent of their income to the IRS, but their income will be 20 percent higher because of all the money sloshing around Washington.

Once you understand their motivations, it’s easy to understand why Washington insiders are so supportive of “bipartisan budget deals” and why they salivate so much for a value-added tax. And you can also see why they’re so anxious to get a President who hasn’t signed the no-tax-hike pledge.

Which may explain why Jeremy Scott, the editor of Tax Notes, is upset that Governor Jeb Bush is now expressing opposition to tax hikes. Here’s some of what he wrote for Forbes, starting with a description of Bush’s original open-to-tax-hikes position.

Before announcing his candidacy, former Florida Gov. Jeb Bush said he wouldn’t agree to Grover Norquist’s pledge not to raise taxes, and he hinted that he would, in fact, trade $10 of spending cuts for $1 of tax increases. …he went out of his way earlier this year to talk about his flexibility on fiscal policy.

That part of Mr. Scott’s column is accurate. I also noticed Gov. Bush’s stance at the time, albeit it caused me to worry because politicians will never impose meaningful spending restraint and reform entitlements if they think tax increases are feasible. Anyhow, Scott then points out that Gov. Bush seems to have moved to an anti-tax hike position.

At an August 2 conference…, Bush flatly said no when asked if he would accept tax hikes as part of a budget deal. “We’ve raised taxes. What we need to be doing is entitlement reform, curbing the growth of spending, creating a high-growth scenario,” the former governor elaborated.

I’m not sure if what Bush said puts him firmly in the no-tax-hike camp, but it’s certainly true that his rhetoric has moved in the right direction.

Which doesn’t make Scott happy. And here’s where he veers from accurate reporting to sloppy and bizarre assertions.

If Jeb Bush needs to shore up his right flank on taxes, it reveals that the GOP has veered far from its positional flexibility that made the 1980s so successful for tax reform efforts. President Reagan was willing to accept tax increases as part of grand bargains on taxes and fiscal policy. …the GOP…won’t control 60 seats in the upper chamber. That means they will need at least some Democratic support. And no party will want to undertake tax reform without at least some bipartisanship. A Jeb Bush victory in 2016 seemed like the best-case scenario for people who want some kind of broad tax reform. His retreat on a willingness to compromise is a major blow to those hopes.

Wow, that’s a lot of misleading statements in a short excerpt.

The final point is the one that really matters. To reiterate what I stated earlier, the Washington establishment is unified in its support of higher taxes for the obvious reason that more money flowing to Washington is good news for politicians, bureaucrats, consultants, lobbyists, cronyists, special interests, contractors, and other insiders. Simply stated, a bigger government means they get richer (and they’ve been quite successful, as you can see from this depressing map).

I could continue, but you get the point.

P.S. Let’s close by shifting to another topic. Many people express disbelief when I argue that politicians such as Barack Obama and Bernie Sanders are not socialists.

In my defense, I’m making a technical point about the economic definition of socialism, which means government ownership of the means of production. And the vast majority of American leftists don’t seem overly interested in having government steel companies, government banks, or government farms. They prefer instead to allow private ownership combined with high levels of taxation and regulation.

If you want to see a real socialist, look on the other side of the Atlantic, where the Labour Party appears poised to elect a complete loon as its leader. The U.K.-based Independent reports that Jeremy Corbyn favors “common ownership” of industry.

…the man who has set alight the leadership race says the party needs to reinstate a clear commitment to public ownership of industry in a move which would reverse one of the defining moments in Labour’s history. …Corbyn reveals that he wants to reinstate Clause Four, the hugely symbolic commitment to socialism scrapped under Tony Blair 20 years ago, in its original wording or a similar phrase that weds the Labour Party to public ownership of industry. …The old Clause Four stated that the party was committed to “common ownership of the means of production, distribution and exchange”

So, maybe the most accurate way of describing leftist politicians in America is to say that they’re redistributionists with a side order of socialism.