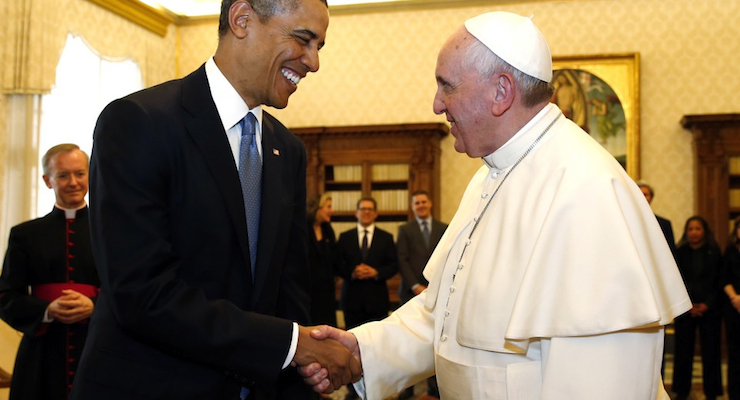 The biggest mistake of well-meaning leftists is that they place too much value on good intentions and don’t seem to care nearly as much about good results. Pope Francis is an example of this unfortunate tendency. His concern for the poor presumably is genuine, but he puts ideology above evidence when he argues against capitalism and in favor of coercive government.

Here are some passages from a CNN report on the Pope’s bias.

Pope Francis makes his first official visit to the United States this week. There’s a lot of angst about what he might say, especially when he addresses Congress Thursday morning. …He’ll probably discuss American capitalism’s flaws, a theme he has hit on since the 1990s. Pope Francis wrote a book in 1998 with an entire chapter focused on “the limits of capitalism.” …Francis argued that…capitalism lacks morals and promotes selfish behavior. …He has been especially critical of how capitalism has increased inequality… He’s tweeted: “inequality is the root of all evil.” …he’s a major critic of greed and excessive wealth. …”Capitalism has been the cause of many sufferings…”

Wow, I almost don’t know how to respond. So many bad ideas crammed in so few words. If you want to know why Pope Francis is wrong about capitalism and human well-being, these videos narrated by Don Boudreaux and Deirdre McCloskey will explain how free markets have generated unimaginable prosperity for ordinary people.

But the Pope isn’t just wrong on facts. He’s also wrong on morality. This video by Walter Williams explains why voluntary exchange in a free-market system is far more ethical than a regime based on government coercion.

Very well stated. And I especially like how Walter explains that markets are a positive-sum game, whereas government-coerced redistribution is (at best) a zero-sum game. Professor Williams wasn’t specifically seeking to counter the muddled economic views of Pope Francis, but others have taken up that challenge. Writing for the Washington Post, George Will specifically addresses the Pope’s moral preening.

Pope Francis embodies sanctity but comes trailing clouds of sanctimony. With a convert’s indiscriminate zeal, he embraces ideas impeccably fashionable, demonstrably false and deeply reactionary. They would devastate the poor on whose behalf he purports to speak… Francis deplores “compulsive consumerism,” a sin to which the 1.3 billion persons without even electricity can only aspire.

He specifically explains that people with genuine concern for the poor should celebrate industrialization and utilization of natural resources.

Poverty has probably decreased more in the past two centuries than in the preceding three millennia because of industrialization powered by fossil fuels. Only economic growth has ever produced broad amelioration of poverty, and since growth began in the late 18th century, it has depended on such fuels. …The capitalist commerce that Francis disdains is the reason the portion of the planet’s population living in “absolute poverty” ($1.25 a day) declined from 53 percent to 17 percent in three decades after 1981.

So, why doesn’t Pope Francis understand economics? Perhaps because he learned the wrong lesson from his nation’s disastrous experiment with an especially corrupt and cronyist version of statism.

Francis grew up around the rancid political culture of Peronist populism, the sterile redistributionism that has reduced his Argentina from the world’s 14th highest per-capita gross domestic product in 1900 to 63rd today. Francis’s agenda for the planet — “global regulatory norms” — would globalize Argentina’s downward mobility.

Amen (no pun intended). George Will is right that Argentina is not a good role model. And he’s even more right about the dangers of “global norms” that inevitably would pressure all nations to impose equally bad levels of taxation and regulation. Returning to the economic views of Pope Francis, the BBC asked for my thoughts back in 2013 and everything I said still applies today.

P.S. Let’s close by taking a look at a few examples of how the world is getting better thanks to capitalism. We’ll start with an example of how China’s modest shift toward markets has generated huge reductions in poverty (h/t: Cato Institute).

Now let’s look at how a wealthier society is also a safer society (h/t: David Frum).

Or how about this remarkable measure of higher living standards (h/t: Mark Perry).

Here’s an amazing chart showing how something as basic as light used to be a luxury good but now is astoundingly inexpensive for the masses (h/t: Max Roser).

These are just a few random examples of how free markets, when not overly stifled by government, can produce amazing things for ordinary people. We may not notice the results from one year to the next, but the results are remarkable when we examine data over longer periods of time. And if our specific goal is to help the poor, there’s no question that economic growth is far more effective than government dependency. Which is why I’ve explained that it’s better to be a poor person in a capitalist jurisdiction.

I’d much rather be a poor person in a jurisdiction such as Hong Kong or Singapore rather than in a “compassionate” country such as France. France might give me lots of handouts, but I’d remain poor. In a free-market society, by contrast, I could climb out of poverty.

P.P.S. Methinks Pope Francis would benefit from a discussion with Libertarian Jesus.