HomePolicyPoverty, the Welfare State, and the Failure of Centralized Government

As we get deeper into an election season, many politicians feel compelled to discuss how to deal with poverty.  And some of them may even be serious about trying to improve the system. This hopefully will lead to big-picture discussions of key issues, such as why the poverty rate stopped falling in the mid-1960s. 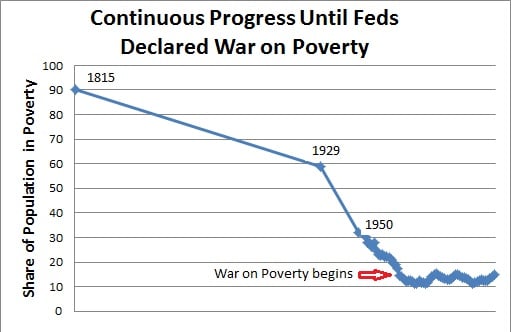 If so, it helps to look past the headline numbers and actually understand the scope of the problem. Nicholas Eberstadt of the American Enterprise Institute explains that the official poverty data from the Census Bureau overstates the number of poor people.

…the official poverty rate is a positive embarrassment today. The poverty rate manifestly cannot do the single thing it was intended for: to count the number of people in our country subsisting below a fixed and absolute “poverty line.” Among its many other shortcomings, this index implicitly assumes that a family’s annual reported income is identical to its spending power… But income and spending patterns no longer track for the lowest income strata in modern America. …the bottom quintile of US households spent 130% more than their reported pretax income. The disparity between spending and income levels for poorer Americans has been gradually widening over time.

Though the shortcomings of the Census Bureau sometimes largely don’t matter because advocates of bigger government arbitrarily choose different numbers that further exaggerate the degree of poverty in the United States. In a column for National Review, the Heritage Foundation’s Robert Rector exposes the dishonest tactic (promoted by the Obama Administration and used by the OECD) of measuring income differences instead of actual poverty.

The Left often claims that the U.S has a far higher poverty rate than other developed nations have. These claims are based on a “relative poverty” standard, in which being “poor” is defined as having an income below 50 percent of the national median. Since the median income in the United States is substantially higher than the median income in most European countries, these comparisons establish a higher hurdle for escaping from “poverty” in the U.S. than is found elsewhere.

Based on honest apples-to-apples numbers, the United States is just as capable as other developed nations of minimizing material deprivation.

A more meaningful analysis would compare countries against a uniform standard. …Garfinkel and his co-authors do exactly that. They measure the percentage of people in each country who fall below the poverty-income threshold in the U.S. ($24,008 per year for a family of four in 2014). The authors reasonably broaden the measure of income to include “non-cash” benefits such as food stamps, the earned-income tax credit, and equivalent programs in other nations. They also subtract taxes paid by low-income families, which are heavy in Europe. …the differences in poverty according to this uniform standard were very small. For example, the poverty rate in the U.S. was 8.7 percent, while the average among other affluent countries was around 7.6 percent. The rate in Germany was 7.3 percent, and in Sweden, it was 7.5 percent. Using a slightly higher uniform standard set at 125 percent of the U.S. poverty-income thresholds, the authors find that the U.S. actually has a slightly lower poverty rate than other affluent countries.

These numbers probably disappoint leftists who want to believe that European nations are somehow more generous and more effective in dealing with poverty.

But Robert explains that advocates of smaller government and individual responsibility should not be happy because the federal government’s profligacy isn’t helping poor people become self sufficient.

It is, of course, a good thing that left-wing claims of widespread deprivation in the U.S. are inaccurate. But government welfare policy should be about more than shoveling out a trillion dollars per year in “free” benefits. When President Lyndon Johnson launched the War on Poverty, he sought to decrease welfare dependence and increase self-sufficiency: the ability of family to support itself above poverty without the need for government handouts. By that score, the War on Poverty has been a $24 trillion flop. While self-sufficiency improved dramatically in the decades before the War on Poverty started, for the last 45 years, it has been at a standstill.

Robert Doar and Angela Rachidi of the American Enterprise Institute make a very similar point about the welfare state failing to promote self sufficiency.

Recently released data show that the official poverty rate was 14.8% in 2014, only slightly below the 15% in poverty in 1970. And this is despite large increases in federal spending on anti-poverty programs.  Spending on these programs has increased almost tenfold in constant dollars since the early 1970s and increased from 1.0% of GDP in 1972 to 3.8% in 2012… Where does this leave us? If helping people achieve self-sufficiency and be free of government assistance is the goal, the safety net has largely failed. But if reducing material hardship is the goal, it performs well.

I would make a very important change to the above passage. Doar and Rachidi write that the poverty rate hasn’t declined “despite large increases” in supposed anti-poverty spending. Based on the evidence, it would be more accurate to say that poverty has stayed high “because of large increases.”

Simply stated, when you subsidize something, you get more of it. Anyhow, all this matters for three reasons.

Let’s summarize what we know. The official poverty rate exaggerates the actual number of poor people by failing to properly measure income, but that may not matter much since proponents of more redistribution prefer to use dishonest numbers that are even more distorted. And we also know that the welfare state is capable of redistributing lots of money, but also that it does a terrible job of promoting self sufficiency. Indeed, it’s almost certainly the case that massive levels of redistribution have had a negative effect.

So, what’s the solution to this mess?

Folks on the left want even more of the same. But why should we expect that to have any positive effect? Indeed, it’s more likely that an expansion of the welfare state will simply lure more people into lives of sloth and dependency. Some people on the right want to replace the welfare state with a guaranteed or basic income. This has some theoretical appeal, but it is based on the very shaky assumption that politicians could be convinced to completely repeal all existing redistribution programs.

Which is why the most prudent and effective step is to simply get the federal government out of the business of redistributing income and let state and local governments decide how best to deal with the issue.

This federalism-based approach has several advantages.