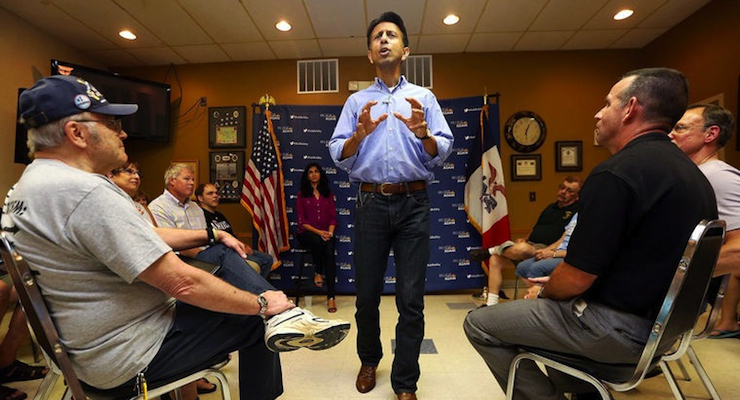 Give him credit. Most elected officials are content to tinker at the edges, but Louisiana Gov. Bobby Jindal actually wants to solve problems. Look what he’s done, for instance, on fiscal policy. He sought to abolish his state’s personal income tax, a step that would have dramatically boosted the states competitiveness. That effort stalled, but he actually has been successful in curtailing state spending. He’s amassed one of the best records for frugality of all governors seeking the GOP presidential nomination. 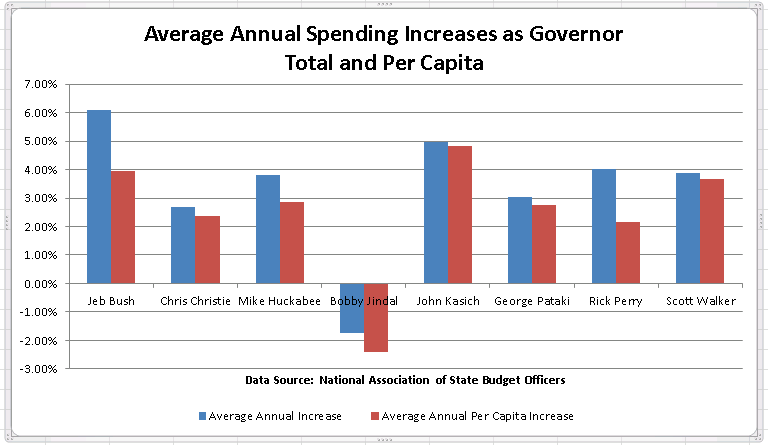 Data for average annual spending per capita for states run by Republican governors running for president.

And he’s now joined the list of presidential candidates seeking to rewrite the internal revenue code. Since we’ve already reviewed the tax reform plans put forth by Rand Paul, Marco Rubio, Jeb Bush, and Donald Trump, let’s do the same for the Louisiana governor.

Regular readers hopefully will recall that there are three big problems with the current tax code.

Let’s see whether Governor Jindal’s plan mitigates these problems. On the issue of tax rates, the Louisiana Governor replaces the seven rates in the current system with three rates, starting at 2 percent. And instead of a top rate of 39.6 percent, the maximum penalty on work and entrepreneurship would be 25 percent.

He also abolishes the marriage penalty and gets rid of the alternative minimum tax (a perverse part of the code that forces people to calculate their taxes a second time, based on a different set of rules, with the IRS being the only beneficiary).

Regarding double taxation, one of the big problems in the current system is that corporate income is taxed at both the business level and the shareholder level. Most proposals seek to fix this problem by reducing or eliminating the tax burden on dividends on households. Governor Jindal, by contrast, would keep that tax and instead abolish America’s corporate income tax, which is probably the worst in the world.

In one fell swoop, that bold piece of reform also solves many other problems. You don’t have to worry about the tax bias of depreciation. You don’t have to worry about the anti-competitive policy of worldwide taxation. And you wipe out a bunch of corrupt tax preferences. The plan also would create universal savings accounts that would be free of double taxation (a policy that has been very successful in Canada). Jindal’s plan also eliminates the death tax, though there would still be a capital gains tax.

Shifting to loopholes, the disappointing news is that the charitable deduction is untouched and the home mortgage interest deduction is merely trimmed. But the positive news is that the state and local tax deduction apparently goes away. And because the abolition of the corporate income tax automatically gets rid of the loophole for fringe benefits such as health insurance policies, the Governor also proposes to create an individual deduction for those costs.

The net effect of all these changes is that the tax code will be far less punitive.

The Tax Foundation is the go-to place for analysis on the economic and revenue impact of tax reform plans. Here’s what they predicted would happen to the economy if Jindal’s plan was adopted.

Now let’s end with two observations that may be more political than economic.

First, Jindal’s plan is a huge tax cut. About $10 trillion over 10 years according to the experts at the Tax Foundation. In this regard, Jindal is in the same league with Trump, who also proposed a very large tax cut. Paul, Rubio, and Bush, by contrast, have much more modest tax cuts.

This is a good thing, of course, assuming candidates have serious plans to restrain – and perhaps even cut – federal spending. I don’t lose sleep about whether there’s a balanced budget in year 5 or year 10, but a tax reform plan with a big tax cut isn’t serious unless there’s a concomitant proposal to shrink the burden of government spending. Second, Jindal proposes to have all Americans pay some income tax. That’s the purpose of the 2-percent rate in his plan. His argument is quite explicit: “Every citizen needs to help row the boat, even if only a little.”

This is an appealing argument. While Mitt Romney was wrong in his assertion that 47 percent of the population was part of the dependent class, we don’t want too many people riding in the wagon and thinking government is “free.”

P.S. If you’re curious about Jindal’s position on other policy issues, he has a good track record on education. He implemented some good school choice reform, notwithstanding wretched and predictable opposition from the state’s teachers’ union.