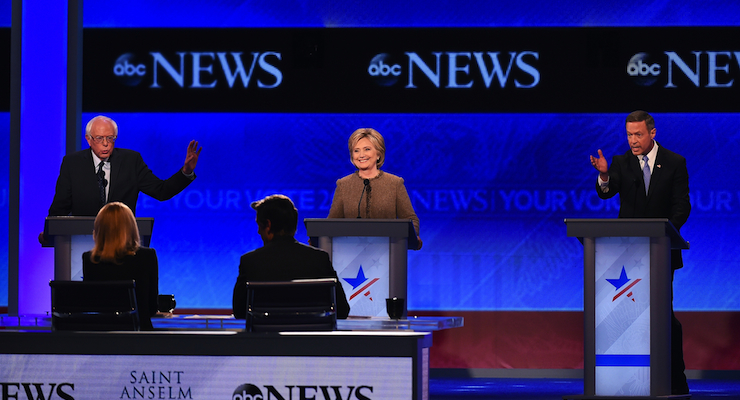 Normally I’m very happy to work for the Cato Institute, both because it is a principled and effective organization. But I wondered about my career choices last night because I was stuck with the very unpleasant task of live-tweeting the Democratic debate hosted by ABC News. Cleaning out septic tanks would have been a more enjoyable way to spend my time.

Of all the crazy things that were discussed–you can see my contemporaneous reactions on my Twitter feed–the Clinton-Sanders-O’Malley support for so-called Paycheck Fairness legislation would be at the top of my list.

Yes, I was irked by the myopic fixation on income inequality, the support for class-warfare taxation, and the reflexive advocacy for more government spending, but messing around with the price system–because of an assertion that women are paid 77 cents for every $1 received by men–is an entirely different level of foolishness.

Here’s some of what I wrote in 2012, for instance, when discussing proposals to give politicians power over wage levels.

…what’s really at stake is whether we want resources to be allocated by market forces instead of political edicts. This should be a no-brainer. If we look at the failure of central planning in the Soviet Union and elsewhere, a fundamental problem was that government officials – even assuming intelligence and good intentions – did not have the knowledge needed to make decisions on prices. And in the absence of a functioning price system, resources get misallocated and growth suffers. So you can imagine the potential damage of giving politicians, bureaucrats, and courts the ability to act as central planners for the wage system.

In other words, higher taxes and more spending will dampen growth, and that’s no good, but pervasive intervention in the price system can screw up an entire economy. Indeed, I suspect only bad monetary policy is capable of inflicting a greater level of damage.

Moreover, the left’s theory is based on the assumption that greedy businesses and investors are deliberately sacrificing profits by choosing to pay men more when they could hire equally qualified women for less money.

To use a highly technical economic phrase, that’s friggin’ nuts. Yet, our leftist friends want to replace market-based compensation with coercion-based wages.

Consider, for instance, a report from the Pew Charitable Trusts about initiatives on the state level.

The article cited my unflattering remarks on the issue.

…some critics, such as Daniel Mitchell of the Cato Institute, a libertarian think tank in Washington, said that the new legislation would put a “catastrophic burden” on businesses. “The notion that there’s some widespread discrimination in the marketplace, there’s just no real-world evidence for it,” Mitchell said. “They’re trying to give the government widespread authority to make very abstract judgments about the value of a job in the private sector.”

And I’m not the only critic.

Here are some excerpts from a recent column in the Wall Street Journal by Sarah Ketterer.

When it comes to economically foolish laws, California is second to none. A good example is the California Fair Pay Act… Like its national counterpart, it is an aggressive attempt to eradicate a wage gap between men and women that is allegedly due to discrimination in the workplace. But this wage gap is illusory, and the legislation will have unintended consequences, including for women.

She’s right. Policy that is bad when implemented by a state can cause widespread damage if imposed nationally.

Ms. Ketterer elaborates on why the proposal is misguided.

The Bureau of Labor Statistics (BLS) notes that its analysis of wages by gender does “not control for many factors that can be significant in explaining earnings differences.” What factors? Start with hours worked. …Men are significantly more likely than women to work longer hours, according to the BLS. And if we compare only people who work 40 hours a week, BLS data show that women then earn on average 90 cents for every dollar earned by men. Career choice is another factor. …Of the 10 lowest-paying majors—such as “drama and theater arts” and “counseling psychology”—only one, “theology and religious vocations,” is majority male. Conversely, of the 10 highest-paying majors—including “mathematics and computer science” and “petroleum engineering”—only one, “pharmacy sciences and administration,” is majority female. Eight of the remaining nine are more than 70% male. Other factors that account for earnings differences include marriage and children, both of which cause many women to leave the workforce for years.

And here’s the amazing part.

One of Obama’s top economic advisers, to maintain her academic credibility, admitted that the 77 cents number is fraudulent.

It’s unclear whether Clinton-Sanders-O’Malley know (or even care) that the number is garbage.  But what is clear is that legislation based on this dishonest data could cause massive economic distortions.

Though, to be fair, Ms. Ketterer points out that trial lawyers will enjoy more business.

What California’s Fair Pay Act will do, however, is make the state, already notorious for regulation and red tape, a more difficult place to do business. Companies must now ensure that every penny of wage differential between the men and women they employ is attributable to bona-fide differences in education, training, experience, quantity or quality of work, and so on. …even attempting to do so will only add to companies’ already substantial regulatory-compliance budgets. Some of these factors—quality of work, for instance—are inevitably subjective, yet trial lawyers will swoop in to turn every conceivable pay difference into a lawsuit.

A bunch of lawsuits would actually be the least-worst outcome. What scares me far more is pervasive controls on wages, which is what our leftist friends ultimately prefer.

P.S. You probably won’t be surprised, given their history of mendacity, to learn that the left-wing bureaucrats at the Paris-based OECD also are peddling dishonest numbers to advance this ideological agenda.

Politicians' Greed Once Again Thwarted by the Laffer Curve