HomePolicyPoliticians’ Greed Once Again Thwarted by the Laffer Curve

Politicians’ Greed Once Again Thwarted by the Laffer Curve

Art Laffer, former economic advisor to President Ronald Reagan and the architect of the Laffer Curve.

If you owned a restaurant and wanted to generate more income and boost your bottom line, would you double your prices thinking that this would double your revenue?

Of course not. You would understand that a lot of your patrons would simply dine elsewhere. And if they didn’t have other restaurants available, many of them would simply eat at home.

But now imagine you’re a politicians and you want more tax revenue, so you can try to buy more votes and redistribute more money to the special interests that fund your campaign.

Would you assume that doubling a tax rate would lead to twice as much revenue? Based on the shoddy methodology of the Joint Committee on Taxation (JCT), which is in charge of the revenue-estimating process on Capitol Hill, the answer is yes. 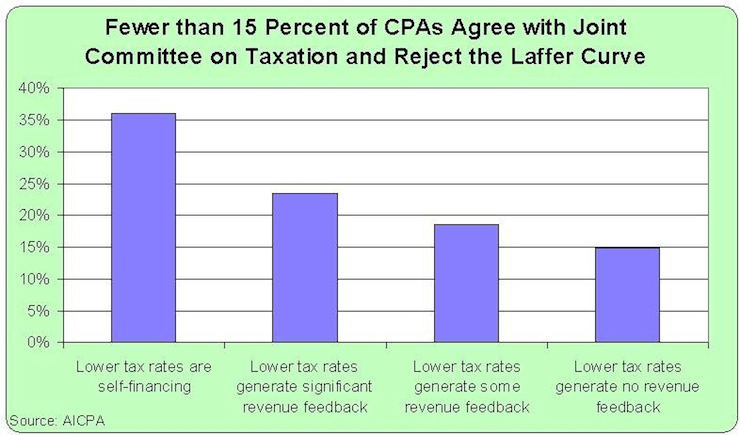 To be fair, the bureaucrats at the JCT probably wouldn’t say that tax revenue would double, but their model basically assumes that tax policy doesn’t affect the economy’s overall performance. So even if there’s a huge increase in the tax burden, they assume overall economic output won’t be affected.

This obviously is an absurd assumption. You don’t have to be a rocket scientist to realize that taxes impact economic performance. Low-tax economies like Hong Kong and Singapore, for instance, routinely outperform medium-tax economies like the United States. Similarly, differences in tax policy are one of the reasons why the United States generally grows faster than (or doesn’t grow as slowly as) Europe’s high-tax welfare states.

The lesson that should be learned is that the JCT should not estimate the revenue impact of a change in tax policy simply by looking at the change in the tax rate and the current trendline for taxable income.To get a more accurate answer, the bureaucrats also should try to estimate the degree to which taxable income will change.

It depends on how sensitive taxpayers are to changes in tax rates. Some types of taxpayers are very responsive, while other aren’t.

First, you presumably shouldn’t want to be at the revenue-maximizing pointof the Laffer Curve. Unless, of course, you think giving politicians an extra $1 to spend is worth destroying $5 or $10 of income for households.

Second, you definitely don’t want to be on the revenue-losing side of the Laffer Curve. That means households are losing so much income that politicians actually have less money to spend, a lose-lose scenario.

Politicians, though, often can’t resist the temptation to raise tax burdens all the way to the short-run revenue-maximizing point.

Many of them simply don’t care if the private economy suffers several dollars of lost output per dollar of additional tax revenue. All that matters is that they have the ability to buy more votes with other people’s money.

But what’s really amazing is that some of them are so short-sighted and greedy that they raise the tax burden by so much that revenues actually fall.

And that’s what is happening in New York, where the tax burden on cigarettes has become so high that tax revenues are falling. Here are some excerpts from a story in the Syracuse newspaper.

The number of state-taxed cigarette packs sold in New York has plummeted by 54 percent in the past decade. …more smokers are buying cigarettes in ways that avoid New York’s $4.35 per pack tax, the highest in the nation.

They cross state lines, shop from black market vendors and travel to Native American outlets to save $6 per pack or more, experts say. New York is losing big. In the past five years, the state’s cigarette tax collections have dropped by about $400 million…off-the-tax-grid shopping options add up to as much as $1.3 billion in uncollected state cigarette taxes each year, according to a study by the National Academies of Sciences, Engineering, and Medicine.

And the article notes that Oklahoma’s non-compliance rate is even higher.

About 35 percent of smokers in Oklahoma buy cigarettes in ways that avoid state taxes, compared with about one-third of smokers in New York who do the same, experts said.

Needless to say, politicians hate it when the sheep don’t willingly line up to be fleeced. So they’re trying to change policy in ways that divert more money into their greedy hands.

That’s the bad news. The good news is that they’re not very successful.

a federal court in 2011 ruled in the state’s favor and paved the way for Gov. Andrew Cuomo to try to collect the state tax from Native American nations by making their wholesalers pick up the cost. Instead, many nations abandoned the wholesale route and stopped selling name-brand cigarettes. They began stocking their stores with significantly cheaper ones made by Indian-owned manufacturers, experts said, like Seneca-brand cigarettes.

And even when policy changes are “successful,” that doesn’t necessarily translate into more loot that politicians can use to buy votes.

When taxes become extortion, people will evade when they can’t avoid.

The Germans call it Schadenfreude when you take pleasure from another person’s misfortune. Normally, I would think people who feel this way have a character flaw.

But not in this case. I confess that get a certain joy from this story because politicians are being punished for their greed. I like the fact that they have less money to waste.

We can call it the revenge of the Laffer Curve!

P.S. Years ago, the JCT actually estimated that a 100 percent tax rate would generate more tax revenue. I realize it’s only a small sign of progress, but I don’t think the bureaucrats would make that assertion today.

P.P.S. Here’s my as-yet-unheeded Laffer Curve lesson for President Obama, based on the fact that rich taxpayers paid five times as much tax after Reagan reduced the top tax rate from 70 percent to 28 percent.

P.P.P.S. And here’s something that’s downright depressing. Some leftists are so resentful of successful people that they want higher tax rates even if the result is less revenue. And you’ll notice at the 4:20 mark of this video that President Obama is one of those people.

P.P.P.P.S. Speaking of leftists, here’s my response when one of them argued against the Laffer Curve.