HomePolicyEconomic Lesson From Europe for Hillary

Economic Lesson From Europe for Hillary

We can learn a lot of economic lessons from Europe.

Today, we’re going to focus on another lesson, which is that higher taxes lead to more red ink. And let’s hope Hillary Clinton is paying attention.

I’ve already made the argument, using European fiscal data to show that big increases in the tax burden over the past several decades have resulted in much higher levels of government debt. 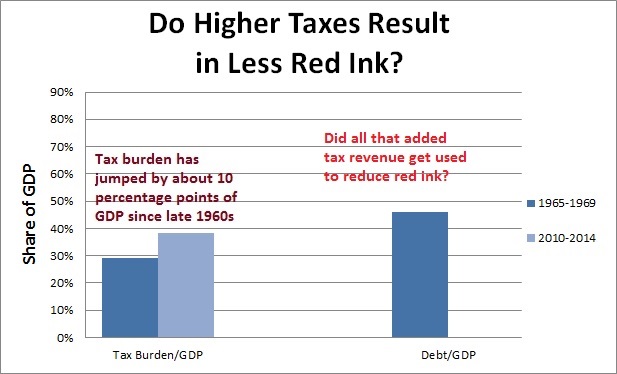 But let’s now augment that argument by considering what’s happened in recent years. There’s been a big fiscal crisis in Europe, which has forced governments to engage in austerity. But the type of austerity matters. A lot.

…austerity is a catch-all phrase that includes bad policy (higher taxes) and good policy (spending restraint). But with a few notable exceptions, European nations have been choosing the wrong kind of austerity (even though Paul Krugman doesn’t seem to know the difference).

And when I claim politicians in Europe have chosen the wrong kind of austerity, that’s not hyperbole.

As of 2012, there were €9 of tax hikes for every €1 of supposed spending cuts according to one estimate. That’s even worse than some of the terrible budget deals we’ve seen in Washington.

At this point, a clever statist will accuse me of sour grapes and state that I’m simply unhappy that politicians opted for policies I don’t like.

I’ll admit to being unhappy, but my real complaint is that higher tax burdens don’t work.

And you don’t have to believe me. We have some new evidence from an international bureaucracy based in Europe.

In a working paper for the European Central Bank, Maria Grazia Attinasi and Luca Metelli crunch the numbers to determine if and when “austerity” works in Europe.

Now let’s look at the results of their research.

It turns out that austerity does work, but only if it’s the right kind. The authors find that spending cuts are successful and higher tax burdens backfire.

This is an important policy lesson also in view of the fact that revenue-based consolidations tend to be the preferred form of austerity, at least in the short run, given also the political costs that a durable reduction in government spending entail.

Here are a few important observations from the study’s conclusion.

In other words, restraining the growth of spending is the best way to reduce red ink. Heck, it’s the only way.

When debating my leftists friends, I frequently share this table showing nations that have obtained very good results with multi-year periods of spending restraint.

My examples are from all over the world and cover all sorts of economic conditions. And the results repetitively show that when you deal with the underlying problem of too much government, you automatically improve the symptom of red ink.

I then ask my statist pals to show me a similar table of data for countries that have achieved good results with higher taxes.

I’m still waiting for an answer.

Which is why the only good austerity is spending restraint.

P.S. Paul Krugman is remarkably sloppy and inaccurate when writing about austerity. Check out his errors when commenting on the United Kingdom, Germany, and Estonia.

How Many Manufacturing Jobs Has Indiana Lost Since NAFTA, WTO?