The “Progressive” Threat to Baltic Exceptionalism November 15, 2016 by Dan Mitchell

I’m a big fan of the Baltic nations of Estonia, Latvia, and Lithuania.

These three countries emerged from the collapse of the Soviet Empire and they have taken advantage of their independence to become successful market-driven economies.

One key to their relative success is tax policy. All three nations have flat taxes. Estonia’s system is so good (particularly its approach to business taxation) that the Tax Foundation ranks it as the best in the OECD. 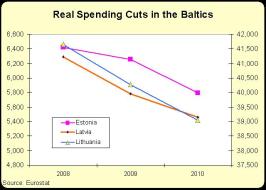 And the Baltic nations all deserve great praise for cutting the burden of government spending in response to the global financial crisis/great recession (an approach that produced much better results than the Keynesian policies and/or tax hikes that were imposed in many other countries).

First, we have a grim update from Estonia, which may be my favorite Baltic nation if for no other reason than the humiliation it caused for Paul Krugman. But now Estonia may cause sadness for me. The coalition government in Estonia has broken down and two of the political parties that want to lead a new governmentare hostile to the flat tax.

Estonia’s government collapsed Wednesday after Prime Minister Taavi Roivas lost a confidence vote in Parliament, following months of Cabinet squabbling mainly over economic policies. …Conflicting views over taxation and improving the state of Estonia’s economy, which the two junior coalition partners claim is stagnant, is the main cause for the breakup. …The core of those policies is a flat 20 percent tax on income. The Social Democrats say the wide income gaps separating Estonia’s different social groups would best be narrowed by introducing Nordic-style progressive taxation. The two parties said Wednesday that they will immediately start talks on forming a coalition with the Center Party, Estonia’s second-largest party, which is favored by the country’s sizable ethnic-Russian majority and supports a progressive income tax.

And Lithuanians just held an election and the outcome does not bode well for that nation’s flat tax.

After the weekend run-off vote, which followed a first round on October 9, the centrist Lithuanian Peasants and Green Union party LGPU) ended up with 54 seats in the 141-member parliament. …The conservative Homeland Union, which had been tipped to win, scored a distant second with 31 seats, while the governing Social Democrats were, as expected, relegated to the opposition, with just 17 seats. …The LPGU wants to change a controversial new labour code that makes it easier to hire and fire employees, impose a state monopoly on alcohol sales, cut bureaucracy, and above all boost economic growth to halt mass emigration. …Promises by Social Democratic Prime Minister Butkevicius of a further hike in the minimum wage and public sector salaries fell flat with voters.

The Social Democrats sound like they had some bad idea, but the new LGPU government has a more extreme agenda. It already has proposed to create a special 4-percentage point surtax on taxpayers earning more than €12,000 annually (the government also wants to expand double taxation, which also is contrary to the tax-income-only-once principle of a pure flat tax).

So the bad news is that the flat tax could soon disappear in Estonia and Lithuania.

But the good news, based on my discussions with people in these two nations, is that the battle isn’t lost. At least not yet.

In both cases, policy can’t be changed unless all parties in the coalition government agree. Fortunately, they haven’t reached that point.

And hopefully that point will never be reached if Estonia and Lithuania want long-run success.

All of the Baltic nations get reasonably good scores from Economic Freedom of the World. Ditching the flat tax will cause their scores to decline.

But the flat tax isn’t just good policy. It also has symbolic value, telling both domestic entrepreneurs and global investors that a country has a commitment to a system that won’t impose extra punishment just because a person contributes more to national economic output.

By the way, the LPGU Party is very correct to worry about emigration. The Baltic nations (like most countries in Eastern Europe) face a very large demographic problem. And every time a young person leaves for better opportunities elsewhere (even if that better opportunity is a big welfare check), that makes the long-run outlook even more challenging.

But imposing a more punitive tax system is exactly the opposite of what should happen if the goal is faster growth so that people don’t leave the nation.

Let’s close with a famous quote from John Ramsay McCulloch, a Scottish economist from the 1800s.

To be sure, progressive taxation didn’t lead to total catastrophe, so McCulloch’s warning may seem overwrought by today’s standards.

So what he wrote in 1863 may turn out to be very prescient for historians in 2063 who wonder why the western world collapsed.

P.S. If Estonia and Lithuania move in the wrong direction, Latvia could be a big winner. That nation already has received some positive attention for being fiscally responsible, and it also has withstood pressure from the IMF to impose bad tax policy. So Latvia is well positioned to reap the benefits if Estonia and Lithuania shoot themselves in the foot.