HomePolicyGovernment, Cronyism, and the Gambling Industry 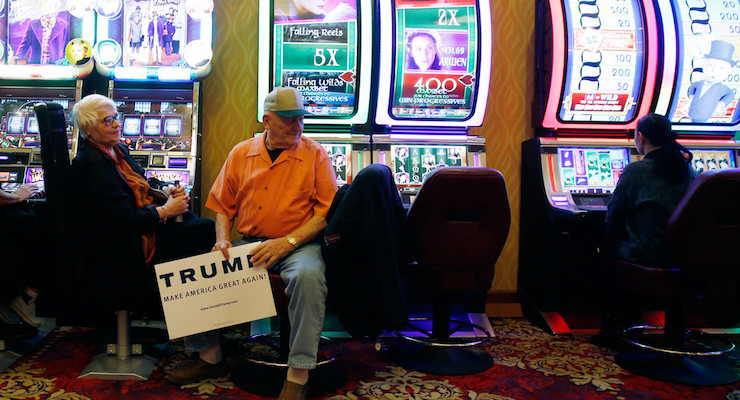 I have a very consistent view of victimless crimes.

The good news is that the nation is slowly but surely moving in the direction of legalization.

The bad news is that politicians doing the right thing in the worst possible way. Let’s look at three examples.

Our first wretched example is government-run lotteries, which are rip-off operations. In a genuine market, competition forces casinos to have reasonably decent odds.

A second example is that politicians seem to view legalization merely as an opportunity for taxes, graft, featherbedding, and cronyism. Consider the case of Atlantic City, as explained by the Wall Street Journal.

In 1976 New Jersey voters approved a referendum that legalized gambling in Atlantic City. The constitutional amendment required casino revenues to fund programs for senior citizens and disabled residents, but politicians have instead funneled the cash to favored projects and businesses under the guise of promoting development. Guess how that’s turned out? A 1984 law required casinos to pay 2.5% of gaming revenues to the state or “reinvest” 1.25% in tax-exempt bonds issued by the state Casino Reinvestment Development Authority for state and community “projects that would not attract capital in normal market conditions.” Investment recipients have included Best of Bass Pro shop, Margaritaville and Healthplex. A decade later, state lawmakers imposed a $1.50 fee (which has since doubled) on casino parking spots to fund Atlantic City transportation, casino construction and a convention center. In 2004 lawmakers added a $3 surcharge for casino hotel stays to finance new hotel rooms and retail establishments, which had the effect of promoting unsustainable commercial and casino development. …Employment in Atlantic City has declined by about 10% over the last decade. Since 2010 the city’s property tax base has shrunk by two thirds. Local politicians raised property taxes by 50% between 2013 and 2014 to compensate for the dwindling tax base, but this has merely deterred new business investment and propelled flight. Meantime, local politicians have continued to spend… Between 2010 and 2014, expenditures increased by 10% while government debt doubled. The city government spends about $6,600 a year per resident—more than any other city in the state including Newark ($2,344). …Labor costs constitute about 70% of the budget. Earlier this year, the city emergency manager projected a $393 million cumulative deficit over the next five years absent reforms. …Democratic legislators and Governor Chris Christie passed a bailout that allows the city to squeeze an additional $120 million out of casinos in revenues annually to compensate for lower property-tax revenue. To sum up: New Jersey…plundered Atlantic City casinos, redistributed the spoils and loaded up the city with unaffordable levels of debt. The gambling mecca is a five-star example of failed liberal policies.

In other words, gambling did lead to addiction. Politicians got hooked on wasteful spending and haven’t been able to kick the habit.

Our final example is how politicians and established casinos are getting in bed together to prohibit competition from online gaming.

Andy Quinlan of the Center for Freedom and Prosperity is not impressed by this bit of cronyism.

Casino magnate Sheldon Adelson has long sought federal legislation that would override the ability of state governments to set their own online gambling rules. Given his business activities, Adelson clearly has no moral objections to gambling itself. His goal is simply to undermine market competition and put alternatives to his Vegas casinos out of business, and he has spent millions on lobbyists to help make that happen. Adelson’s allies in Congress have tried repeatedly to pass the Restoration of America’s Wire Act (RAWA), which would prevent states from authorizing online gambling within their own borders… Outside groups strongly warned against the consequences of undermining the 10th Amendment in the pursuit of crony capitalism. RAWA represents both a direct attack on personal liberty and a potential slippery slope in its erosion of federalist principles.

Veronique de Rugy of the Mercatus Center also is disappointed with this odious bit of special-interest favoritism.

Adelson hates online gambling, as it competes with his bricks-and-mortar Las Vegas casinos for customers. More than five years ago, on what has become known to the poker world as Black Friday, the federal government unleashed a legal jihad against online poker companies and their top executives. Online poker is not itself illegal—a fact clarified by the DOJ’s reinterpretation of the Wire Act—but the 2006 Unlawful Internet Gambling Enforcement Act made it illegal for payment processors to transfer funds to and from gambling sites. The problem for Adelson and his allies is that the UIGEA and other federal statutes apply only when state borders are crossed. The 10th Amendment and the principles of federalism mean that federal lawmakers should have no say regarding activities that take place entirely within one state’s borders. So if state governments wish to authorize online gambling for their citizens, they are and should remain free to do so.

Time for my two cents on the issue. Ideally, no government should have the power to tell gamblers whether they can engage in consensual transactions across state lines or even national borders.

But not only has that already happened, but we now have politicians and a cronyist conspiring to have the federal government interfere with states that want to allow online gambling inside state borders.

It will be interesting to see whether Republicans, now that they’re about to control Washington, will choose cronyism or competition, centralization or federalism (the Export-Import Bank is another test of GOP principles…or lack thereof).

Let’s put all this in context. Today’s topic is gambling and the cancerous effect of government intervention and favoritism in that sector. But the lesson we should learn is that cronyism is a bad idea, period. Cronyism is also bad in agriculture. It’s bad in finance. It’s bad in the tax code. It’s bad in energy. It’s bad everywhere.

To conclude, here’s an excellent video from Lean Liberty about the dangers of letting big business and big government rig the rules for the benefit of powerful insiders.

Shut Down the Department of Energy, Yesterday if Possible