HomePolicyWashington Should Learn from Successful Tax Reform in North Carolina

Washington Should Learn from Successful Tax Reform in North Carolina

Earlier this year, I pointed out that Trump and Republicans could learn a valuable lesson from Maine Governor Paul LePage on how to win a government shutdown.

Today, let’s look at a lesson from North Carolina on how to design and implement pro-growth tax policy.

In a recent op-ed in The Wall Street Journal, Senator Thom Tillis, R-N.C., from the Tarheel State explained what happened when he helped enact a flat tax as Speaker of the State House.

In 2013, when I was speaker of the state House, North Carolina passed a serious tax-reform package. It was based on three simple principles: simplify the tax code, lower rates, and broaden the base. We replaced the progressive rate schedule for the personal income tax with a flat rate of 5.499%. That was a tax-rate cut for everyone, since the lowest bracket previously was 6%. We also increased the standard deduction for all tax filers and repealed the death tax. We lowered the 6.9% corporate income tax to 6% in 2014 and 5% in 2015. …North Carolina’s corporate tax fell to 3% in 2017 and is on track for 2.5% in 2019. We paid for this tax relief by expanding the tax base, closing loopholes, paring down spending, reducing the cost of entitlement programs, and eliminating “refundable” earned-income tax credits for people who pay no taxes.

Have these reforms generated good results?  The Senator says yes.

More than 350,000 jobs have been created, and the unemployment rate has been cut nearly in half. The state’s economy has jumped from one of the slowest growing in the country to one of the fastest growing.

What about tax revenue? Has the state government been starved of revenue?

…a well-mobilized opposition on the left stoked fears that tax reform would cause shrinking state revenues and require massive budget cuts. This argument has been proved wrong. State revenue has increased each year since tax reform was enacted, and budget surpluses of more than $400 million are the new norm. North Carolina lawmakers have wisely used these surpluses to cut tax rates even further for families and businesses.

Senator Tillis didn’t have specific details on tax collections in his column. I got suspicious that he might be hiding some unflattering numbers, so I went to the Census Bureau’s database on state government finances. But it turns out the Senator is guilty of underselling his state’s reform. Tax revenue has actually grown faster in the Tarheel State, compared the average of all other states (many of which have imposed big tax hikes).

Another example of the Laffer Curve in action.

And here’s a chart from North Carolina’s Office of State Budget and Management. As you can see, revenues are rising rather than falling. 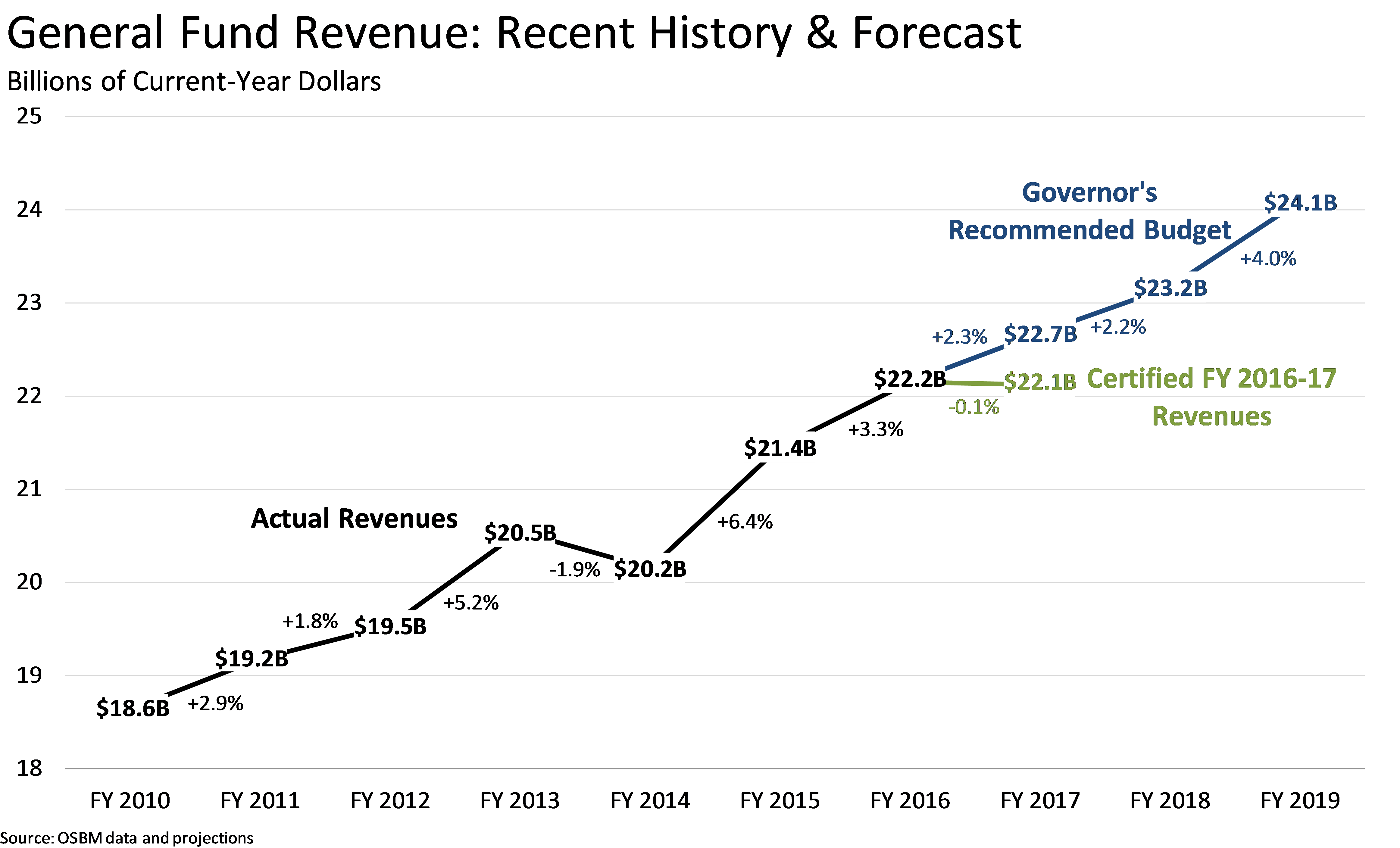 By the way, I’m guessing that the small drop in 2014 and the big increase in 2015 were caused by taxpayers delaying income to take advantage of the new, friendlier tax system. We saw the same thing in the early 1980s when some taxpayer deferred income because of the multi-year phase-in of the Reagan tax cuts.

But I’m digressing. Let’s get back to North Carolina.

Here’s what the Tax Foundation wrote earlier this year.

After the most dramatic improvement in the Index’s history—from 41st to 11th in one year—North Carolina has continued to improve its tax structure, and now imposes the lowest-rate corporate income tax in the country at 4 percent, down from 5 percent the previous year. This rate cut improves the state from 6th to 4th on the corporate income tax component, the second-best ranking (after Utah) for any state that imposes a major corporate tax. (Six states forego corporate income taxes, but four of them impose economically distortive gross receipts taxes in their stead.) An individual income tax reduction, from 5.75 to 5.499 percent, is scheduled for 2017. At 11th overall, North Carolina trails only Indiana and Utah among states which do not forego any of the major tax types.

And in a column for Forbes, Patrick Gleason was even more effusive.

…the Republican-controlled North Carolina legislature enacted a new budget today that cuts the state’s personal and corporate income tax rates. Under this new budget, the state’s flat personal income tax rate will drop from 5.499 to 5.25% in January of 2019, and the corporate tax rate will fall from 3% to 2.5%, which represents a 16% reduction in one of the most harmful forms of taxation. …This new budget, which received bipartisan support from a three-fifths super-majority of state lawmakers, builds upon the Tar Heel State’s impressive record of pro-growth, rate-reducing tax reform. …It’s remarkable how much progress North Carolina has made in improving its business tax climate in recent years, going from having one of the worst businesses tax climates in the country (ranked 44th), to one of the best today (now 11th best according to the non-partisan Tax Foundation).

Since they began cutting taxes in 2013, North Carolina legislators have kept annual increases in state spending below the rate of population growth and inflation. As a result, at the same time North Carolina taxpayers have been allowed to keep billions more of their hard-earned income, the state has experienced repeated budget surpluses. As they did in 2015, North Carolina legislators are once again returning surplus dollars back to taxpayers with the personal and corporate income tax rate cuts included in the state’s new budget.

Last but not least, I can’t resist sharing this 2016 editorial from the Charlotte Observer. If nothing else, the headline is an amusing reminder that journalists have a hard time understanding that higher tax rates don’t necessarily mean more revenue and that lower tax rates don’t automatically lead to less revenue.

A curious trend you might have noticed of late: North Carolina’s leaders keep cutting taxes, yet the state keeps taking in more money. We saw it happen last year, when the state found itself with a $400 million surplus,

despite big cuts in personal and corporate tax rates. …Now comes word that in the first six months of the 2016 budget year (July to December), the state has taken in $588 million more than it did in the same period the previous year. …the overall surge in tax receipts certainly shouldn’t go unnoticed, especially since most of the increased collections for the 2016 cycle so far come from higher individual income tax receipts. They’re up $489 million, 10 percent above the same period of the prior year.

Though the opinion writers in Charlotte shouldn’t feel too bad. Their counterparts at the Washington Post and Wall Street Journal have made the same mistake. As did a Connecticut TV station.

Demographic Doom and the Welfare State