HomePolicyDemographic Doom and the Welfare State

Demographic Doom and the Welfare State

Yes, the burden of government spending is enormous and the tax system is stifling, but the nation gets extremely high scores for rule of law and human liberty. Moreover, it is one of the world’s most laissez-faire economies when looking at areas other than fiscal policy.

Indeed, depending on who is doing the measuring, Finland ranks either slightly above or slightly below the United States when grading overall policy.

Yet even the best welfare state faces a grim future because of demographic change. Simply stated, redistribution programs only work if there is a sufficiently large supply of new taxpayers to finance promised handouts.

And that supply is running dry in Finland. Bloomberg reports that policymakers in that nation are waking up to the fact that there won’t be enough future taxpayers to finance the country’s extravagant welfare state.

Demographics are a concern across the developed world, of course. But they are particularly problematic for countries with a generous welfare state, since they endanger its long-term survival.

…the Aktia Bank chief economist said in a telephone interview in Helsinki. “We have a large public sector and the system needs taxpayers in the future.” …According to the OECD, Finland already has the lowest ratio of youths to the working-age population in the Nordics. …And it also has the highest rate of old-age dependency in the region. …The situation is only likely to get worse, according to OECD projections.

Here are a couple of charts showing dramatic demographic changes in Nordic nations. The first chart shows the ratio of children to working-age adults. 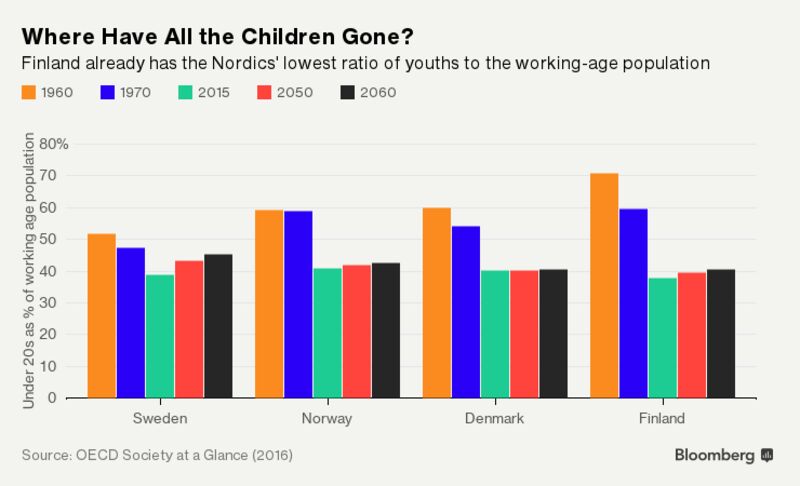 And the second charts shows the population of old people (i.e., those most likely to receive money from the government) compared to the number of working-age adults.

As you can see, the numbers are grim now (green bar) but will get far worse by the middle of the century (the red and black bars) because the small number of children today translates into a small number of working-age adults in the future. 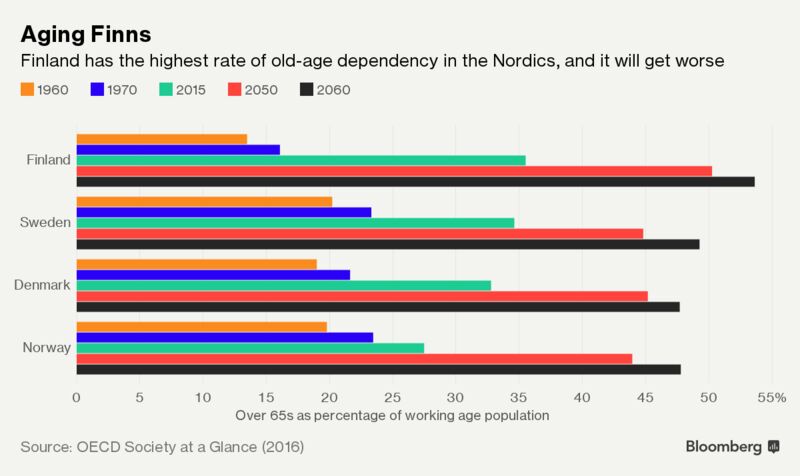 To be blunt, these numbers suggest that it’s just a matter of time before the fiscal crisis in Southern Europe spreads to Scandinavia.

Though it’s important to understand that demographic changes don’t necessarily trigger fiscal and economic problems. Hong Kong and Singapore have extremely low fertility rates, yet they don’t face big problems since they are not burdened by western-style welfare states.

By the way, the article also reveals that Finland’s government isn’t very effective at boosting birthrates, something that we already knew based on the failure of pro-natalist government schemes in nations such as Italy, Spain, Denmark, and Japan.

Though I’m amused that the reporter apparently thinks government handouts are a pro-parent policy and believes that more of the same will somehow have a positive effect.

Finland, a first-rate place in which to be a mother, has registered the lowest number of newborns in nearly 150 years. …the fertility rate should equal two per woman, Schauman says. It was projected at 1.57 in 2016, according to Statistics Finland. That’s a surprisingly low level, given the efforts made by the state to support parenthood. …Finland’s famous baby-boxes. Introduced in 1937, containers full of baby clothes and care products are delivered to expectant mothers, with the cardboard boxes doubling up as a makeshift cot. …Offering generous parental leave…doesn’t seem to be working either. …The government has been working with employers and trade unions to boost gender equality by making parental leave more flexible and the benefits system simpler.

Sigh, a bit of research would have shown that welfare states actually have a negative impact on fertility.

The bottom line is that entitlement reform is the only plausible way for Finland to solve this major economic threat.

Washington Should Learn from Successful Tax Reform in North Carolina