There are several challenges when trying to analyze the impact of policy on economic performance.

One problem is isolating the impact of a specific policy. I like Switzerland’s spending cap, for instance, but to what extent is that policy responsible for the country’s admirable economic performance? Yes, I think the spending cap helps, but Switzerland also many other good policies such as a modest tax burden, private retirement accounts, open trade, and federalism.

Another problem is the honest and accurate use of data. You can make any nation look good or bad simply by choosing either growth years or recession years for analysis. This is known as “cherry-picking” data and I try to avoid this methodological sin by looking at multi-year periods (or, even better, multi-decade periods) when analyzing various policies.

But not everyone is careful.

Jason Furman, who was Chairman of the Council of Economic Advisers during Obama’s second term, has a column in today’s Wall Street Journal. What immediately struck me is how he cherry-picked data to bolster his claim that the government shouldn’t reduce its claim on taxpayers. Here’s his core argument.

…the 1981 and 2001 model of tax cuts makes no sense in today’s fiscal environment. Tax revenue as a percentage of gross domestic product is lower today than it was when Presidents Reagan and George W. Bush cut taxes.

And here the chart he shared, which apparently is supposed to be persuasive. 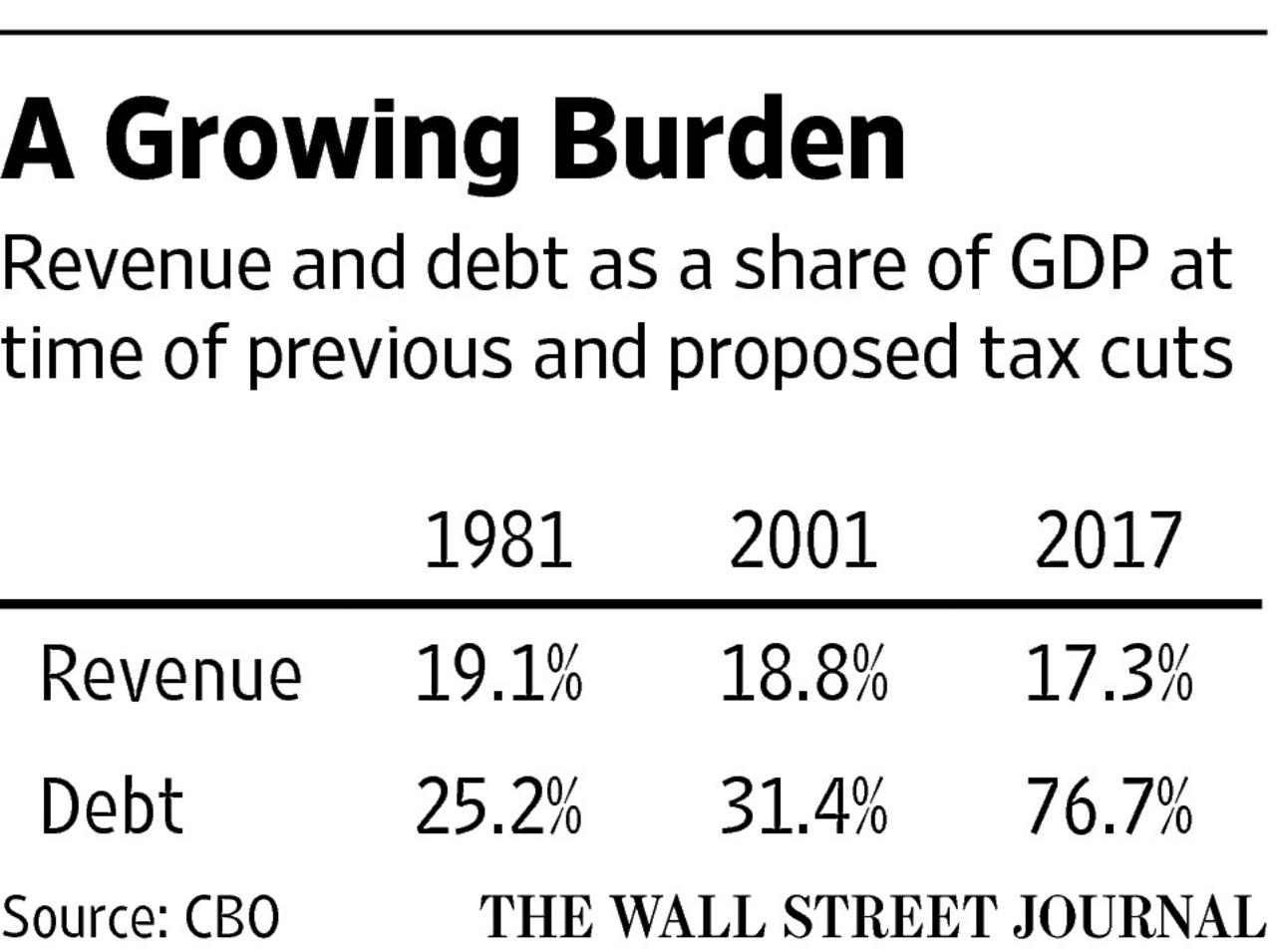 So Furman’s implication that tax receipts today are abnormally low is completely wrong.

Moreover, he shows the projection for 2017 tax receipts, which is appropriate. But he neglects to mention that the Congressional Budget Office’s (CBO) forecast for the next 10 years shows revenues averaging 18.1 percent of GDP, or the 30-year forecast that shows revenues becoming an even bigger burden.

In other words, a substantial tax cut is needed to keep the tax burden from climbing well above the long-run average.

Furman’s slippery use of data is disappointing, but it’s also inexplicable. He could have offered some effective and honest arguments against tax cuts, most notably that reducing revenues is problematical since Trump and Republicans seem unwilling to restrain the growth of government spending.

Let’s close by looking at a few other interesting passages from his column.

I found this sentence to be rather amusing since he’s basically admitting that Obamanomics was a failure.

Growth has been too low for too long and raising it should be a top priority.

He then asserts that tax cuts never pay for themselves. I would have agreed if he wrote “almost never,” or if he wrote that the new GOP package won’t pay for itself. But his doctrinaire statement is belied by data from the United States, Canada, and United Kingdom.

…no serious analyst has ever claimed that tax cuts generate enough growth to pay for themselves.

By the way, Furman openly admits the Laffer Curve is real. And if the Joint Committee on Taxation shows revenue feedback of 20 percent-30 percent when scoring the Republican plan, that will represent huge progress.

Estimates by a wide range of economists and the nonpartisan scorekeepers at the Joint Committee on Taxation have found that the additional growth associated with well-designed tax reform may offset 20% to 30% of the gross cost of tax cuts—not counting dynamic feedback.

Last but not least, he comes out of the tax-increase closet by embracing the truly awful Simpson-Bowles budget plan.

The economy needs a fiscal plan that combines an increase in revenues with entitlement reforms that protect the poor a la Simpson-Bowles.

As I’ve explained before, Simpson-Bowles is best characterized as lots of new revenue on the tax side and plenty of gimmicky provisions on the spending side, rather than genuine reform.

P.S. Even though Republicans are not serious about controlling spending and even though I don’t think the GOP tax cut will come anywhere close to “paying for itself,” the tax cuts are still a good idea. Both to generate growth and also because reduced tax receipts hopefully will translate into pressure to control spending at some point.

Now There Are Four: Another Honest Liberal Debunks Gun Control