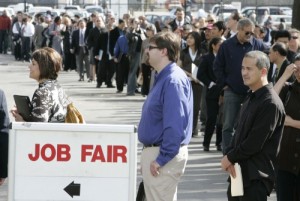 Democrats were quick to tout the April jobs report released Friday, but new polls suggest they will be forced to change their strategy back to dividing the electorate sooner rather than later. While the headlines were filled with upbeat spin over the headline unemployment number, Americans aren’t buying it.

Unemployment, again, fell only because of the number of adults seeking work dropped considerably, and now just one of out of six men between the ages of 25 and 54 are without jobs. The number of Americans who have given up on looking for work are far too many and not counted in the jobless rate.

When we actually count these adults on the sidelines who say they would seek employment if conditions were better and part-timers desiring full-time work, the jobless rate shoots up to a more realistic 12.3 percent.

Though modest job gains were made in nearly every sector, save for information technology, which realized a small loss, it was widely reported that this translated into better-paying jobs being added to the U.S. economy. However, hourly earnings made no gains, whatsoever, suggesting the economy is still only creating low-paying jobs, a sad norm in the Obama recovery.

Prior to the April jobs report being released, a Commerce Department report showed that the pullback in economic growth was severe, down to 0.1 percent from the fourth quarter’s 2.6 percent pace. This is becoming a pattern under the Obama administration, which all too early decides to tout a recovery after fourth-quarter numbers only to watch it fizzle-out in the first. Despite the upbeat spin on the jobs report, a whopping 49 percent say the U.S. economy is in a recession.

And the data suggest this pattern is likely to continue.

The U.S. Payroll to Population employment rate (P2P), as measured by Gallup, has followed a fairly consistent trend since the Obama administration took office after the recession. Seasonal employment, which is dominated by low-paying jobs, boosts the job numbers around this time of year, but quickly precipitates right on cue.

Meanwhile, in the annual Economy and Personal Finance Gallup poll conducted April 3-6, the number of American workers who say they are “fairly likely” or “very likely” to lose their job within 12 months was at its highest level since 1981. This type of insecurity does not bode well for the party in power, historically speaking.

All in all, the April jobs report was certainly an improvement, but the totality of economic data are still nowhere near what would constitute a trend, and Americans know it. It would seem Democrats are celebrating a bit too early.