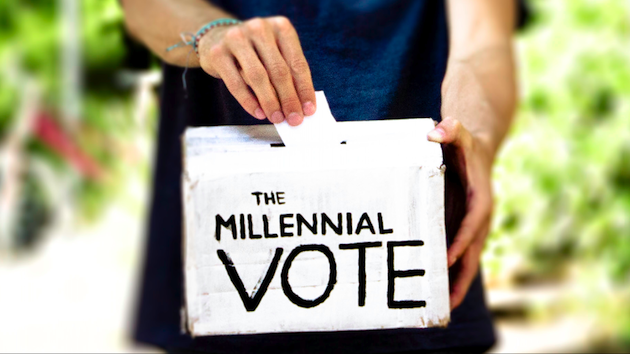 President Obama’s job approval rating among white millennial voters — aged 18- to 29-year-olds — cratered throughout the year 2014 and is now just 34 percent. That’s only three points higher than among whites aged 30 and older, according to a new survey by Gallup, and comes shortly after another recently released survey found Obama’s job approval rating among white non-college graduates fell to 27 percent in 2014, a whole 14 points less than his approval among white college graduates.

While the two recent Gallup surveys undoubtedly present a challenge for the president and his party moving forward, for some, the narrative that held Republicans had a millennial voter problem wasn’t ever that simple.

“When pundits and pollsters compare Republicans’ vote share among young voters from the 1990s to now, they are making an inaccurate comparison,” said PPD’s senior political analyst Richard D. Baris. “In fact, with the exception of 2008 — or, to a lesser extent 2012 — Republicans have remained very competitive among young whites. It was the increase in minority voters among the entire 18-24 year-old bloc that caused them to lean more Democratic.”

Still, the results are significant, because this is the narrowest approval gap between a bloc that was previously a strong base of support for Democrats and Obama — white millennial voters — and a bloc that has become the most reliably Republican-voting group — older white Americans.

In 2009 and 2010, the president’s approval rating was 9 and 10 percentage points higher, respectively. Further, approval among younger whites matched his overall national rating in his first two years in office, while now it is a whole 8 points below the national average.

“These data underscore the gradual erosion of the disproportionately strong support Obama received from young white voters as he took office in 2009 and ran for re-election in 2012,” said Gallup Editor-in-Chief Frank Newport.

“Obama continues to enjoy higher approval ratings among all 18- to 29-year-olds — regardless of race or ethnicity — than he does among the general population, but this is largely attributable to younger age groups in the U.S. being disproportionately composed of nonwhites,” Newport added. “In other words, a big part of the age gap in Obama’s approval ratings today is attributable not so much to differences in approval within racial or ethnic groups, but to the fact that the white population in the U.S. skews older, while the nonwhite population skews younger.”

Democrats have severely damaged much of their standing among white voters since Obama took office in 2009, in general. Despite the overwhelming attention given to the proportionate growth of minorities in the American electorate, both Baris and Newport say it is often overstated. While it is an inevitable fact minorities will play an important, vital role in future elections, mocking Republicans for being the party of white people might not be the wisest move on behalf of Democrats.

“Republican domination among white voters is getting to prevalent, that any gains among minority voters as a result of outreach — even moderate gains — will potentially have devastating electoral consequences on the Democratic Party,” Baris said. “They [Republicans] don’t need to win the black vote, for instance, they only need to win 11 or 13 percent. And considering the inroads they made among black and Hispanic voters in 2014, it would appear they know that.”

As Gallup tracking demonstrates, the transition from Democrat-leaning to Republican-domination among white voters is a complex results of rational policy preferences. In the Democratic effort to expand their appeal to minorities and others who feel disenfranchised, which naturally came at the price of an ever-expanding federal government, they ostracized the vast majority of the white voting population.

“Given its sheer size, the working-class white population in the U.S. is of keen importance to politicians and strategists on both sides of the aisle, and many discussions and strategy sessions have focused on the complex set of attitudes and life positions which, as evidenced by these data, have pushed this group further from the Democratic president over the past six years,” Newport concluded.

“Discussions have also focused on the value of a populist approach to appeal to these voters’ economic situations, and the impact of the cultural positions taken by a Democratic party that has as one of its core segments a coalition of minority race and ethnic group members, along with liberals and a smaller segment of highly educated whites.”