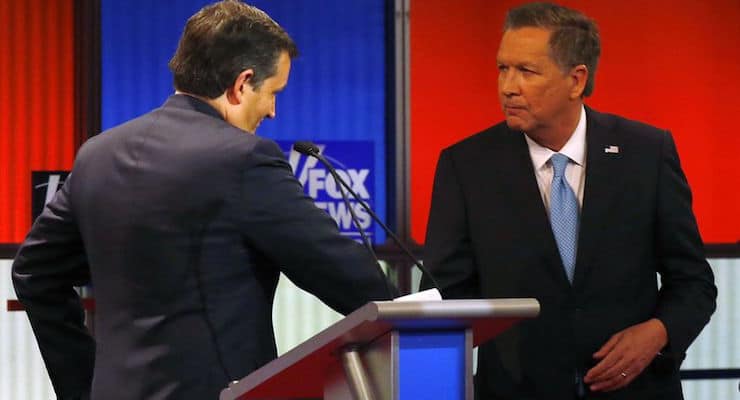 Losing Outsider Label Was the Kiss of Death for Ted Cruz

At a time when he is fighting for his political life, a new [content_tooltip id=”39930″ title=”Gallup”] finds Republican primary voters’ views of Texas Sen. Ted Cruz have declined precipitously. Republicans’ views of Sen. Cruz are now the worst ever in the history of Gallup tracking the Texas senator’s favorability rating.

The survey, which was conducted from April 24 to April 30, Sen. Cruz’s image among Republicans and Republican-leaning independents clocked in at 39% favorable and 45% unfavorable, for a net favorable score of -6. However, the last few days of interviews have marked the first time Gallup has found Sen. Cruz’s image underwater since daily tracking began in July. The net -6 favorability rating represents a stark shift from where it was in late December and early January, when Gallup pegged his net favorable was +48. That’s 54 points higher than today. 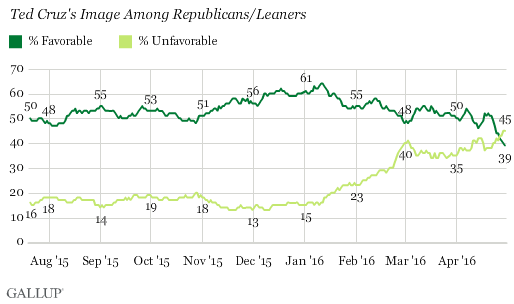 “Cruz now joins the ranks of several other GOP presidential candidates whose images among Republicans fell into net negative territory,” said Gallup Editor-in-Chief Frank Newport. “South Carolina Sen. Lindsay Graham and former New York Gov. George Pataki hold the records for the worst images during the 2016 campaign; both of them had net favorables in the -13 to -14 range last August.”

Meanwhile, as the trajectory of Cruz’s image continues to decline, Gallup found Mr. Trump’s image on the upswing. Even though PPD repeatedly cautions our readers about putting too much stock in general election polls prior to Labor Day–for the simple reason they have no predictive value–it is noteworthy that the frontrunner’s national numbers have slightly overtaken Hillary Clinton. From April 24 to April 30, Mr. Trump had a 59% favorable and 35% unfavorable rating among self-identified Republicans.

That +24 net favorability rating is not Mr. Trump’s high point, indicating he has more room to grow and more work to do to consolidate the party base. His favorability rating was measured at 63%, while his unfavorable came in at 30% in late August and early September. But his rating is up in recent days even as Sen. Cruz’s is on the decline. 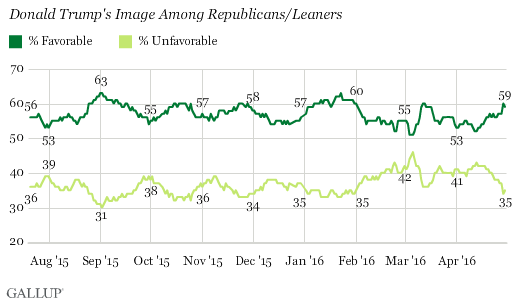 “The remarkable aspect of this trend line is the degree to which since mid-April Trump’s net favorable rating has moved steadily upward just as Cruz’s net favorable rating has moved steadily downward,” Mr. Newport added. “Cruz’s image was consistently more positive than Trump’s from July through the end of February; then the two closely tracked one another before the recent divergence.” 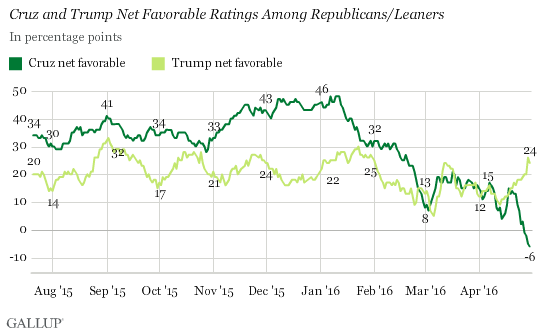 The reason for this shift wasn’t identified per se in the Gallup Poll, but it’s safe to assume in the year of the outsider the last label a Republican candidate should want to be branded with is “establishment.” However, with establishment pols lining up to endorse him, deals being cut with Ohio Gov. John Kasich to collude against Mr. Trump, and party elites awarding him their state’s delegates without a vote, it would appear that is what Donald Trump has managed to do to Sen. Cruz.

A recent [content_tooltip id=”39935″ title=”YouGov”] found for the first time more Republicans viewed him to be an establishment candidate rather than an outsider. More voters than not–and ever (62%)–now say Sen. Cruz is more of an establishment candidate than an outsider. As a result, Sen. Cruz’s image has taken a hit in Gallup and other recent polls.

Another YouGov survey conducted for The Economist pegged his favorability rating among Republican and Republican-leaning voters at 56%, but that was prior to the period polled by Gallup and is down significantly from the 67% measured in January.