HomePollsGallup: Party Affiliation in U.S. Continues to Shift Toward Republicans

That represents a monumental shift from a 30-state advantage for the Democrats in 2008 to a 7-state advantage for Republicans. Gallup’s findings are largely in line with the latest results published on the PPD Battleground State Voter Profiles, which found only a slightly larger Democratic advantage in Virginia. However, independents continued to shift their allegiance toward the GOP, resulting in a state that is still very much competitive.

Political Composition of the 50 U.S. States Based on annual state averages of party affiliation from Gallup Daily tracking

“Many states classified as Democratic in both 2008 and 2009 are now listed as competitive, if not Republican, states in both 2015 and 2016,” said Jeffrey M. Jones of Gallup. “Five other states moved from competitive to solid Republican over the same time period.” 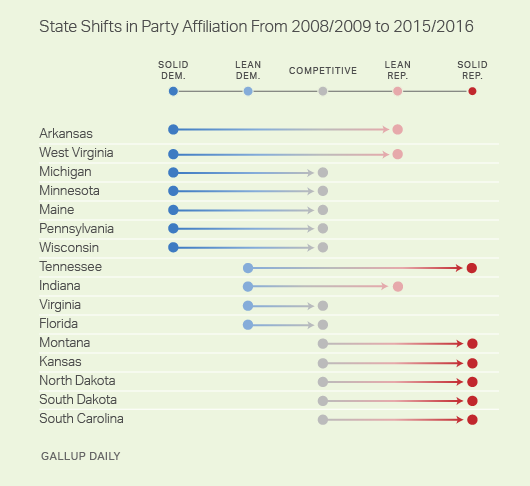 Still, even as there are more Red states than Blue state, those in the Democratic column are more populous. Thus, Democrats have a slight edge in party affiliation nationwide, 47% to 42%, though this is also down significantly from 2008, when Democrats held a 52% to 40% edge. Overall, as PPD previously examined, the Democratic Party has essentially been “decimated” during the era of Barack Obama, increasingly resembling a coalition of coastal elites.

President Donald J. Trump won 9 of the 15 competitive states in the 2016 presidential election, including Michigan, Pennsylvania, Wisconsin, North Carolina, Florida, Arizona, Georgia, Texas and Louisiana. Of those, Michigan is the most Democratic with nearly a 5-point edge. However, the president clobbered Hillary Clinton among independents in the Rust Belt and won a large percent of the working class Democratic base.