HomeNewsPoliticsBush On ISIS: ‘This Is Al Qaeda Plus’

Bush On ISIS: ‘This Is Al Qaeda Plus’ 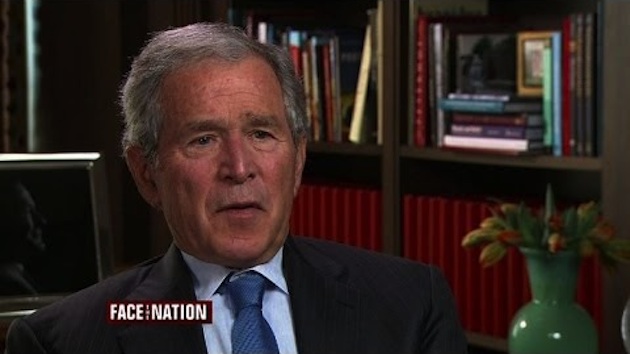 Appearing on Face The Nation Sunday, former President George W. Bush said he had no regrets in Iraq, except for the fact “that a violent group of people has risen up again.”

“Do you have any regrets [about sending troops into Iraq]?” host Bob Schieffer asked. “I mean, do you ever feel that maybe it was the wrong decision?”

As usual, President Bush opted not to take a shot at his successor, President Obama. Instead, he expressed hope that the new strategy, which has taken an enormous amount of criticism, will in the end work.

“No, I think it was the right decision,” the former president said. “My regret is that a violent group of people has risen up again. This is al Qaeda plus. I put in the book that they need to be defeated. And I hope they are. I hope the strategy works.”

A video of a press conference just before the former president announced the surge was widely circulated in the wake of the rise of ISIS due to the prophetic message he put forth.

The president conducted the interview to promote a new book, 41: A Portrait of My Father, which details the life and career his father and 41st president, George H.W. Bush. Never before has a president told the story of his father, who is another president, through his own eyes and in his own words.

Schieffer also asked the former president about whether his brother and former Florida Gov. Jeb Bush would also run for the post. G.W. has repeatedly expressed his support for his brother, whom he says he hopes runs.

“I occasionally fuel the speculation by saying I hope he runs,” Bush said. “I think he’d be a very good president. I understand the decision-making process very well and I know that he is wrestling with the decision.”