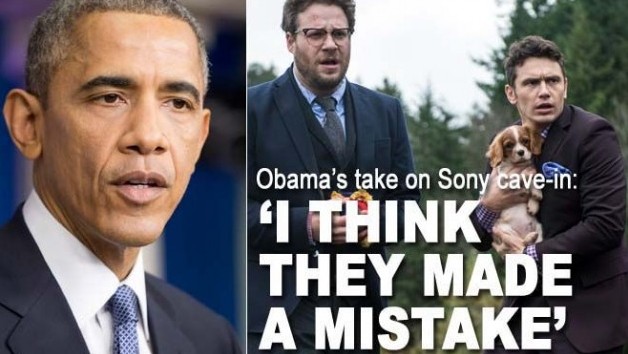 Speaking at his final 2014 year-end press conference, President Obama addressed the cyberattack on Sony Pictures Entertainment (NYSE:SNE), race relations, his decision to normalize diplomatic relations with Cuba, and the challenges of the upcoming year.

The president said he thinks Sony “made a mistake” in choosing not to release “The Interview” in the wake of the hacking attack, which he and the FBI publicly blamed on North Korea Friday. He vowing that the U.S. “will respond.”

“Sony is a corporation,” Obama said. “It suffered significant damage that threats against its employees. I am sympathetic to the concerns that they faced. Having said all that, yes, I think they made a mistake.”

However, Obama offered little as far as any specifics on what the White House plan to retaliate against North Korea might entail.

“When I came into office I stood up a cyber security inter-agency team to look at everything we could do at the government level to prevent these kinds of attacks,” the president said. “We’ve been coordinating with the private sector, but a lot more needs to be done. We’re not even close to where we need to be.”

But, as Rep. Patrick Meehan (R-PA), the chairman of the House Homeland Security Committee’s Subcommittee on Cybersecurity pointed out earlier Friday, the Obama administration has been reluctant to define in no uncertain terms what constitutes a cyberattack, whether it is an act of war and, if so, what the consequences of such an attack will be. Rep. Meehan notes that the House bill dealing with cybersecurity has passed both houses of Congress and has awaited President Obama’s signature for quite some time.

“A lack of consequences for when nation states carry out cyberattacks has only emboldened these adversaries to do more harm,” Meehan said in a statement Friday. “The attack on Sony shows the dire need to upgrade our cyber defenses.”

Sony took harsh criticism from numerous actors and members of the Hollywood elite for its decision to cancel the release under 9/11-style threats, including Judd Apatow, the producer of the movie, who tweeted Wednesday that he thought it was “disgraceful,”

Obama, echoing White House Press Secretary John Ernest, said the U.S. will respond “proportionally” in a “place and time and manner” of their choosing. He also called for improvements in cybersecurity in the private and public sectors, despite the bill that has been waiting on his signature.

The president held his last major press conference of the year following a whirlwind of major developments affecting U.S. security, foreign policy, race relations and the economy. In response to a question regarding the task force on race relations he put together following the grand jury decisions of the Michael Brown and Eric Garner cases, he said he wasn’t afraid to go ahead with policy changes based on recommendations from those selected.

“The task force that I formed is supposed to report back to me in 90 days,” Obama said. “My intention is to, as soon as I get those recommendations, to start implementing them.”

A report by USA Today published on Wednesday found that Obama has issued more presidential memoranda than any U.S. president in history. He’s issued 198 memoranda, which are similar to the 195 executive orders he signed, but president’s are required when signing executive orders to cite the law they’re either addressing or basing the order on, but with memoranda Obama does not.

Earlier in the week, Obama announced a push to normalize relations with Cuba following the release of American Alan Gross from Cuban custody after five years, in exchange for three Cuban spies. Obama was met with heavy criticism for that decision from many Cuban-Americans, as well as lawmakers of both parties.

However, on Friday, Obama claimed he has no illusions about the nature of the Castro regime.

“This is still a regime that represses its people,” he said.

Yet, he defended his decision, saying that nothing has changed after 50 years of the same policy and claimed Cuba will be “open to the world” in ways it hasn’t been before.

His State Department plans to open an embassy in Havana for the first time in decades, though Sen. Rubio said the upcoming Congress will do what they can to block the president’s push, including withholding funding for the embassy.

Obama said the debate over whether to lift the embargo on Cuba would be a “healthy debate” next year.

Obama and his family plan to leave next for their annual holiday vacation in Hawaii. He’s due back in Washington in early January.

The president faces big obstacles on Capitol Hill next year, when Republicans will take over the Senate and return with a bigger majority in the House. Foreign policy problems also persist in the Middle East and between Russia and Ukraine.

Obama said Friday he thinks there are “real opportunities” next year to “get things done.”