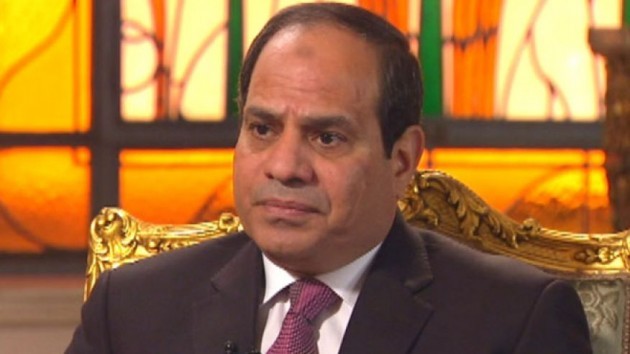 In an exclusive interview with Fox News, Egyptian President Abdel Fattah el-Sisi called for the creation of an “Arab ready force” backed by the U.S. to defeat ISIS. The Egyptian president first called for such a regional coalition in a speech last month, but stressed in the interview with Bret Baier a need for the U.S. to play a greater role in helping his country fight terrorism.

When asked to define the Middle East’s perceptions of the Obama administrations leadership, el-Sisi said it was a “difficult question” in English only after a long pause.

“The suspending of equipment, weapons and arms was a negative indication to the public opinion that the United States is not standing by the Egyptians,” el-Sisi said.

He addressed the need for what he called a religious “revolution,” urging moderate Muslims in Egypt and around the world to “stand up” against terrorists hijacking their religion. According to the Egyptian leader, there is a real fear among Muslims that fanatical religious leadership and oppression can become the norm in the region.

“We have to admit that terrorism is now a major threat not only to Egypt or even the immediate region, but it is a threat to the stability and security of the whole world,” the Egyptian leader said. “We can also see that the map of terrorism and extremism is expanding, it is not recessing.”

He said current U.S. policy toward Egypt is fostering a negative opinion among people, who feel that “the United States is not standing by the Egyptians.”

“For example, the suspending of equipment, weapons and arms was a negative indication to the public opinion that the United States is not standing by the Egyptians,” el-Sisi said. “13 June 2013 until now is a long time now, more than a year and a half now. We thought that the United States would take time to understand what really happened in Egypt but we need really to understand that it was and has been the will of the Egyptians.”

El-Sisi took power after former Muslim Brotherhood-backed President Mohammed Morsi was overthrown in 2013. While el-Sisi acknowledged that Morsi came to power as a result of “free and fair elections,” he said leadership must acknowledge that millions of Egyptians took to the streets to remove the extremist leadership that was leading them into a “vicious cycle of civil war.”

Though the U.S. still gives roughly $1.5 billion a year to Egypt, who is second only to Israel in U.S. foreign aide, mostly military shipments have been ceased since the military leadership overthrew Morsi cracked down on radical Islamist groups, including the Muslim Brotherhood. The U.S. held back deliveries of F-16 fighter jets, M1A1 tanks and Harpoon missiles.
He spoke out against what he described as “political Islam,” a term often used by Dr. Zuhdi Jasser, the president of the American Islamic Forum for Democracy. President el-Sisi said the people of Egypt have a “real fear of this kind” of system, adding they feel “these people have turned their lives into a living hell.”

He made these remarks in the course of defending the ouster of Morsi, who had been aligned with the Muslim Brotherhood. Responding to characterizations of his removal as a “coup,” el-Sisi acknowledged that “free and fair elections” resulted in Morsi’s election. But he said millions of Egyptians took to the streets when they wanted to remove that leadership — he claimed the country was headed into a “vicious cycle of civil war,” at the time he and other military leaders intervened.

Meanwhile, amid some concerns expressed by el-Sisi about the U.S. commitment to his country, Secretary of State John Kerry announced Monday he will travel to Egypt on March 12 to attend an economic development conference. Kerry plans to meet with el-Sisi and other senior Egyptian leaders to discuss various issues including efforts to fight ISIS.