HomeVideoCuomo to Earnest on Planned Parenthood Videos: “You Saw Them Josh, Ugly Stuff”

Cuomo to Earnest on Planned Parenthood Videos: “You Saw Them Josh, Ugly Stuff” 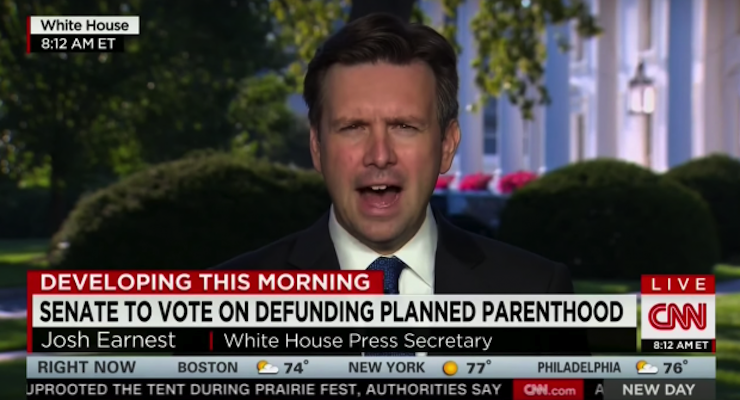 Cuomo began the interview by asking Earnest whether it’s time to “take a look at” the so-called nonprofit’s activities and health care organization. Planned Parenthood is the nation’s largest abortion provider, and President Obama was the first American president ever to speak at the organization’s national annual event.

“I don’t have a whole lot of insight into the specific policies and procedures that Planned Parenthood follows,” Earnest responded. “But what they say, they say they follow the highest ethical standards in the industry.”

Cuomo wasn’t buying it and quickly interrupted, calling out Earnest on what many in the media have found simply unbelievable.

Earnest again attempted to convince the CNN host that he hasn’t yet seen the Planned Parenthood videos — which is interesting, considering he has already condemned them — suggesting they only surfaced because of the “shock value” and not their “news value.” Earnest went on to question whether the four videos — which are heavily edited — released so far are actually authentic.

“I haven’t seen the videos. I can’t render my own judgment on that. People who have looked at the video have raised significant concerns about that, and I think anybody would question the source. I think that’s legitimate,” Earnest said.

Following the videos, eight state governments (including the latest, Florida) and three House committees have opened investigations into Planned Parenthood. The House Energy and Commerce Committee called PPFA’s Senior Director of Medical Services to testify this month about the organization’s fetal tissue harvesting, but the organization refused to produce the star of the first video. Sen. Rand Paul, R-Kty., a physician by profession, vowed to defund Planned Parenthood by any means necessary after the shocking videos were released. Last week, Sen. Paul fast-tracked his legislation by invoking Rule 14, and now the Senate vote to halt federal aid is expected Monday.