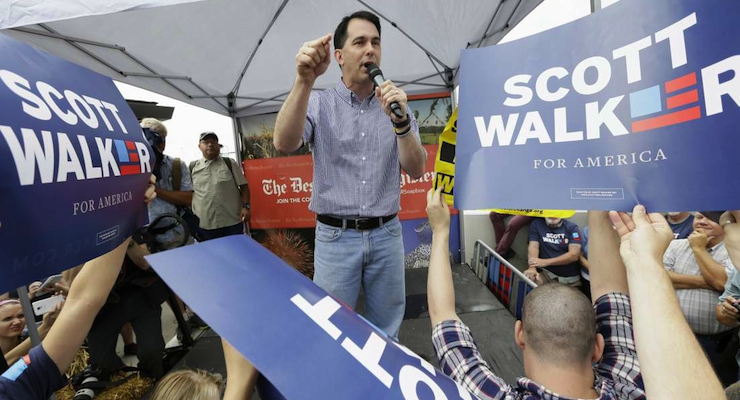 Speaking with Glenn Beck Monday, Wisconsin Gov. Scott Walker agreed Senate Majority Leader Mitch McConnell, R-Ky., is “part of the problem” in Washington. Beck praised Walker, a top Republican presidential candidate, for not being “weasely” or dodging the question. Instead, Beck said Walker had a clear answer to the question: “Will you go so far as saying that there are people in the GOP that are part of the establishment, like Mitch McConnell, that are part of the problem?”

Gov. Walker, who announced his presidential candidacy in July, is known and loved by conservatives for his straightforward speech and retail politician style.

“Yes. I hear it all the time and I share that sentiment,” the two-term Wisconsin governor said. “We were told if Republicans got the majority in the United States Senate, there would be a bill on the president’s desk to repeal ObamaCare. It is August. Where is that bill? Where was that vote?”

Walker is the only governor to ever survive a recall election in the history of American politics. He won three elections in four years after a budget battle prompted unions to launch and lead a failed recall effort. Each time, Walker won reelection with a greater percentage of the vote.

Meanwhile, Majority Leader McConnell–as well as House Speaker John Boehner, R-Ohio–have been enormous disappointments to conservative lawmakers and the party base. Last month, for instance, McConnell lined up a vote to reauthorize funding for the Export-Import Bank, which conservatives argue is a “corporate welfare slush fund” breeding corruption. Texas Sen. Ted Cruz, a fellow-presidential candidate, called McConnell a liar on the floor of the Senate because, as PPD reported, he had assured all 54 members he would not resurrect the defeated Ex-Im Bank.

Walker also pointed out that the American people–who gave the party a landslide, historic victory in 2014–were also told that Congress would act to prevent illegal immigration. However, it was actually governors like himself who prevented President Barack Obama’s policy deferring the deportation of millions of illegal immigrants.

“It’s not because the Congress, a Republican-led Congress, did anything to stop him from doing that,” Walker said. “This is where the frustration is. This is why non-elected candidates are surging in the polls… People are saying loud and clear, ‘Do not dismiss my concerns. Do not dismiss the fact that you told us that Republicans stood for something, and it’s not happening in Washington.'”

The conservative reformist governor said he is running for president to be part of the change to “turn this country around,” but unlike other candidates in the race, he has a record to prove he can get it done in a polarized political environment.

“Now more than ever I think people are yearning,” he said. “They’re crying out.”

“The good part of this is, while [people are] angry, they’re not walking away,” Walker added. “I think people are still optimistic that there’s enough time left to turn this country around.”