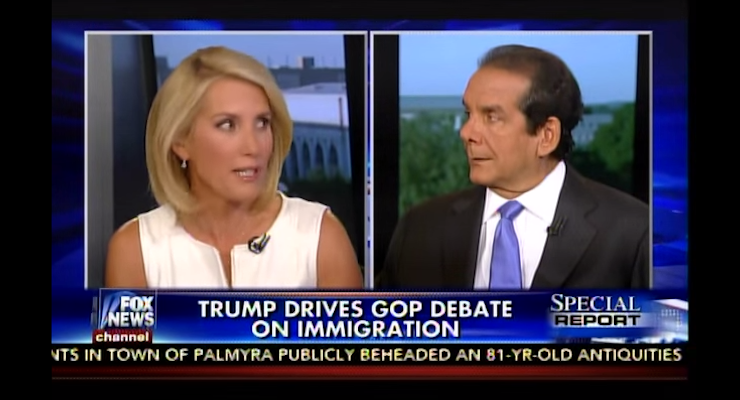 Well, it doesn’t happen often, but when it does it sure is entertaining. On Friday, Laura Ingraham schooled Charles Krauthammer on the history and jurisprudence regarding the 14th amendment and anchor babies on Special Report.

Charles Krauthammer: The issue of anchor babies or birthright citizenship, it is a sideshow because it’s a symptom…

Laura Ingraham: There’s quite a debate about whether the 14th Amendment has to be repealed. I know a lot of people glibly say… That’s not actually been settled and you could do a whole hour on the jurisprudence surrounding that.

Krauhammer: It’s been around for 150 years.

Ingraham: Well, we actually didn’t have a problem with illegal immigration in the 1800s as we know. That wasn’t an issue. It was directed at the slaves who did deserve to stay here. So, it really was an important clause and the author of the clause Howard Jacob said it didn’t apply to foreigners in the United States. But, you know, this is a long conversation… And I know Trump’s rise annoys a lot of people now. And I get it. But the people in this town who have been propping up two parties that have failed the Middle Class, failed them on these global trade deals… that have absolutely not delivered what they promised to deliver to the Middle Class, failed them on enforcing the border, failed them on all these ideas that America was going to export its values around the world… They’re ready to throw in with the guy who has all these conflicting positions maybe because the guys who said they were going to be consistent weren’t. And they’re not fighting for the people.

Krauthammer: It’s easy to go and attack Washington and it’s a clever dodge. The issue here is birthright citizenship…

Ingraham: And Bush and Obama didn’t stop it. Neither stopped it. Neither did McConnell or Boehner when they had the chance. They’re not stopping it. People are tired of it.

Worth noting, Mr. Krauthammer is wrong far more than most pundits and media outlets point out. For instance, Donald Trump was first never going to get in the race. Then, Donald Trump, according to Krauthammer, would never file his financial disclosure forms with the Federal Elections Commission. Once more, Mr. Trump had a very low polling ceiling, which he has since surpassed.

Finally, viewers watching his performance at the debate witnessed “the beginning of the end” of Trump’s campaign. Of course, none of this has turned out to be accurate.