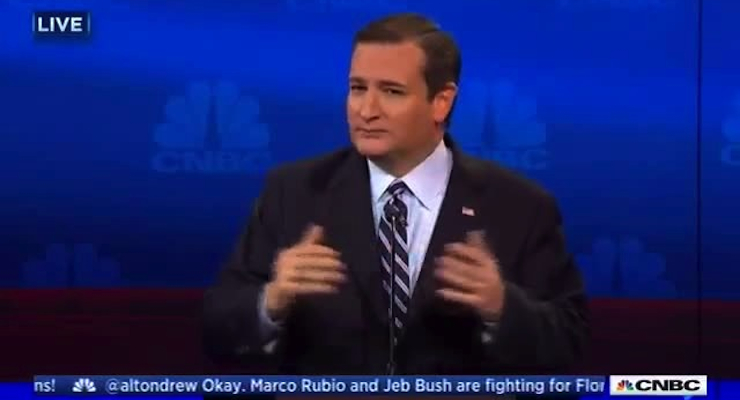 “The questions that have been asked so far in this debate illustrate why the American people don’t trust the media,” Cruz rips CNBC moderator. “This is not a cage match. And if you look at the questions—‘Donald Trump, are you a comic-book villain?’ ‘Ben Carson, can you do math?’ ‘John Kasich, will you insult two people over here?’ ‘ Marco Rubio, why don’t you resign?’ ‘Jeb Bush, why have your numbers fallen?’ How about talking about the substantive issues the people care about?”

When the moderator/interrupter tried to shut him down, Cruz plowed over him more. The crowd went wild with applause.

“I’m not finished yet. The contrast with the Democratic debate, where every fawning question from the media was, ‘Which of you is more handsome and wise?’” Cruz said, again having to rip into a moderator wearing a bias on his sleeve. “Let me be clear. The men and women on this stage have more ideas, more experience, more common sense than every participant in the Democratic debate.”

RNC Chair Reince Priebus Rips CNBC: "I Was Very Disappointed In The Moderators"

Rubio: "Democrats Have the Ultimate Super PAC. It's Called the Mainstream Media"