HomeVideoWARNING GRAPHIC: Inside a Brutal Honor Killing Caught on Video

WARNING GRAPHIC: Inside a Brutal Honor Killing Caught on Video 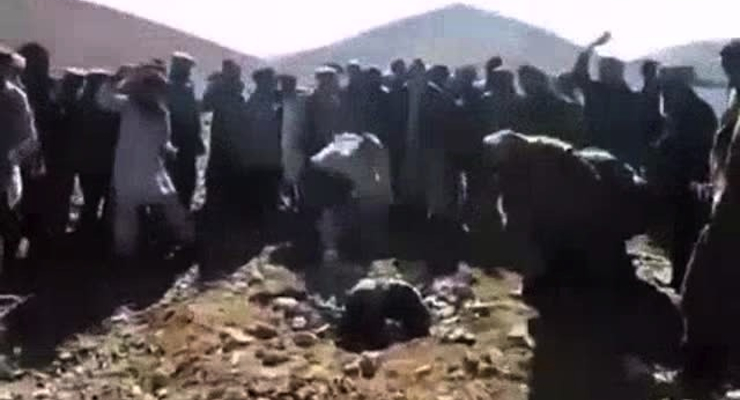 A brutal honor killing depicting a woman who was stoned to death in a hole by Afghan men was caught on tape and posted to social media on Friday. Stoning, or Rajm (Arabic: رجم) in Islamic literature, is a form of capital punishment practiced in United Arab Emirates, Iran, Iraq, Qatar, Mauritania, Saudi Arabia, Somalia, Sudan, Yemen, Northern Nigeria, Aceh in Indonesia, Brunei, and parts of Pakistan.

In Afghanistan and Iraq, both of which have been central fronts for the U.S. in the War on Terror, stoning has been declared illegal. However, it is practiced extrajudicially and according to Sharia, or Islamic law. Rajm is described as punishment in multiple hadiths–Shi’a sayings can be found in Kitab al-Kafi, while Sunni sayings can be found in the Sahih Bukhari and Sahih Muslim–but the method in the video is telling.

In the sunnah of Muhammad, the method of stoning by digging a pit and burying the person’s lower half in it before stoning takes place, is described. The Quran and the Sunna make up the two primary sources of Islamic theology and law, with the latter Sunna being defined as “a path, a way, a manner of life”; “all the traditions and practices” of the Islamic prophet that “have become models to be followed” by Muslims.

Judging by the manner by which the stoning was carried out, it is likely that the woman was charged with some act that constitutes Zina, which is considered a Hudad, or a religious crime against God. Zina includes extramarital sex, premarital sex, illegal sex by a slave girl and homosexuality.

The punishment is execution.

Over one-third (35.1%) of all refugees that came to the U.S. in FY 2015 (24,579) came from the Near East and South Asia. That region that includes Iraq, Iran, Bhutan and, of course, Afghanistan, the latter of which has been the theater of the longest U.S. war.