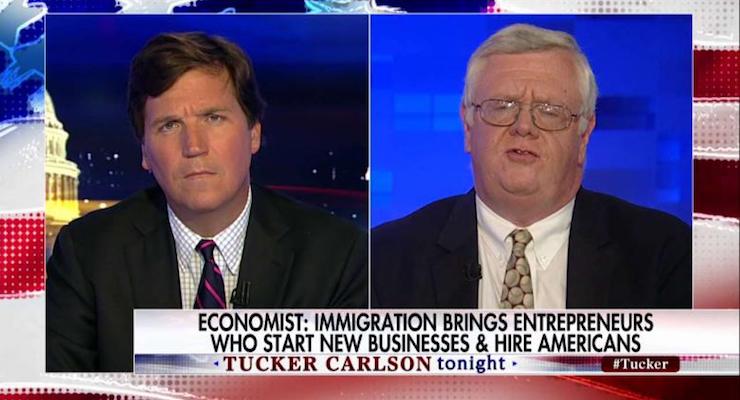 April 13, 2017: Tucker Carlson interviewed and took on economist Ray Keating, who was one of nearly 1,500 economists who signed a letter saying immigration is good for the U.S. economy.

The letter, which was sent to President Donald J. Trump and congressional leaders, claimed immigrants (legal and illegal) have a positive impact on the labor market, contracting simple laws of supply and demand. As Tucker noted, they state that more you have of something, in this case workers, the less it is worth, i.e. wages.

Mr. Carlson accused Mr. Keating of making a “silly” assumption: that all immigrants are the same with the same skill sets.

Perhaps Mr. Keating, who has never had to compete with droves of immigrants standing on the corner or at a 711 willing to do his job for half the price, could learn a thing or two from the responses to these tweets by the polling head at People’s Pundit Daily.

I cannot stand stiff upper lip economists saying immigrants do jobs Americans won’t. If his trade was HVAC or carpentry, they wouldn’t agree

Moron "economist" on @TuckerCarlson right now never lived a working class life. No matter how many degrees he gets, he'll always be ignorant