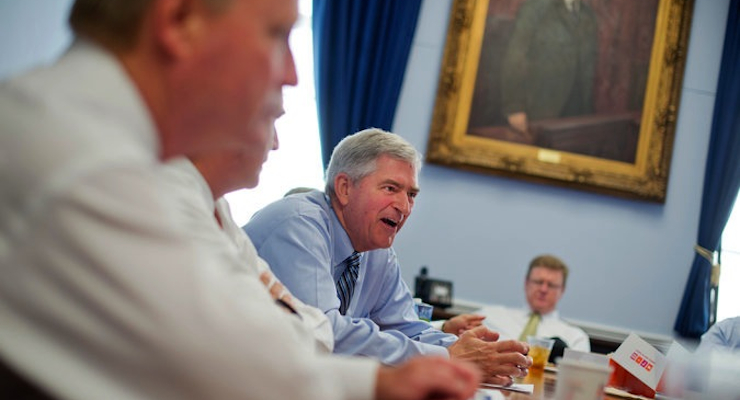 Dan Webster is the Best Choice for the Republican Party, for America

In a rare decision by the Editorial Board at People’s Pundit Daily (PPD), we are announcing our endorsement of Rep. Dan Webster, R-Fla., for Speaker of the House of Representatives. While we have endorsed particular candidates in statewide and national elections in the past, this marks the first time we’ve felt compelled to weigh in on any choice involving party leadership.

First, we want to commend House Majority Leader Kevin McCarthy, R-Calif., for withdrawing from the race. Mr. McCarthy is a good, decent man who did something extraordinary in modern American politics–he put the People’s House and the interests of the American people above his own political ambitions. For that, he deserves accolade and commands greater respect from House members moving forward as he stays on as majority leader.

That said, shortly after the surprise announcement, Rep. Darrell Issa, R-Calif., told reporters at a press conference that McCarthy “was by far the only one declared in that room who had the votes” to reach 218. That is simply not a factual claim. Though it is certainly true that McCarthy had more votes going into the preliminary vote, at the end of the day he didn’t have enough votes to reach the magic number and, from talking to members, it became clear he was not going to get them.

Dan Webster is the only candidate with both the experience and the appeal to bridge the widening gap in the Republican conference. He not only has the support of the House Freedom Caucus, which the next Speaker of the House will need if they hope to reach 218, but also of members like fellow-Floridian Rep. David Jolly.

Rep. Jolly, who told PPD he was honored to be asked to nominate Dan Webster last Thursday, will begin to make his pitch in a Dear Colleague letter that is going out to all members Monday. We fully support his efforts, and implore members to seriously consider the argument he will put forward in support of Dan Webster.

For those who may not know the Florida lawmaker or his record, Dan Webster became Speaker of the Florida House at a time when Republicans regained control of the state legislature under a Democratic governor and enjoyed the approval of only one-fifth of Floridians. By the time he passed the gavel, nearly 60% of Sunshine State voters approved of their legislature, a dramatic turnaround that seems pessimistically impossible to duplicate in Washington.

As of writing this endorsement, the PPD average Congressional Approval Rating Index is underwater by nearly 60% and Americans who believe the country is headed in the right direction are outnumbered 2 to 1. Dan Webster is the only candidate for Speaker of the House who can say he has faced such voter dissatisfaction, and yet successfully restored public trust in government.

Now, he is promising Republican members an opportunity to also restore public trust in the People’s House by reforming procedure and achieving conservative results. Dan Webster is the only candidate for Speaker of the House that has put forward a plan to take up appropriation bills in a way that will allow individual members to represent their own constituents, without the repeated threat of a government shutdown.

Dan Webster is the only candidate with a plan to end the tired politics of brinksmanship and shady midnight votes. He is a fresh face, yet has the experience of running a large state that is known for being a microcosm of the county as a whole, demographically and culturally speaking. The same cannot be said of any other candidate, not even Mr. McCarthy had he never dropped out.

The same cannot be said of Rep. Jason Chaffetz, R-Utah, who quite frankly, will never make it to 218 considering his history with the House Freedom Caucus. We won’t retell that story, but it suffices to say that Mr. Chaffetz’s past actions do not instill confidence within conservative circles that he is the man best suited to lead a reform movement in the House. By comparison, there is a unanimous consensus that Dan Webster’s integrity is beyond reproach.

It is time for the GOP leadership to take McCarthy’s example and put the People’s House, the interests of their constituents and the nation above the failing, K Street-dictated status quo. The decision by Speaker Boehner to postpone a scheduled vote is a transparently desperate attempt to deny Dan Webster a fair vote and salvage an ineffective power structure. These are the tactics that have so enraged conservative members and have made Main Street Republicans view K Street Republicans more of an enemy than the party across the aisle.

As PPD has repeatedly reported, the negative approval numbers in Congress and often abysmal favorability ratings for the Republican Party are largely fueled by dissatisfaction among Republican and Republican-leaning independent voters. Most Republican voters have long felt that their congressional representatives are out of touch with them, but now only 24% believe Republican lawmakers have done a good job representing their party’s values. The House, the Great Opportunity Party and the American people deserve better.