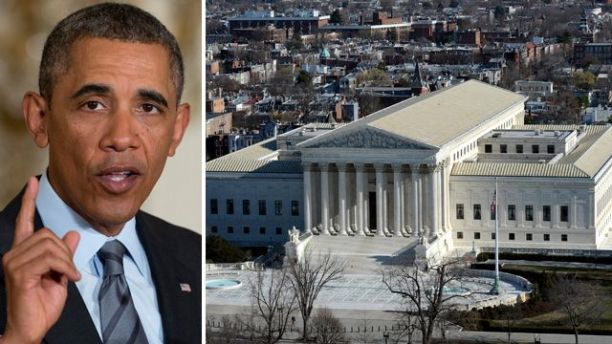 The case heard before the high court Monday, was the first of its kind to be argued in the Supreme Court dealing with the provision in the Constitution allowing the president to make temporarily appointments without Senate confirmation, but it limits the power to only when the Senate is in recess.

It was previously heard by the U.S. Court of Appeals for the District of Columbia Circuit, as well as two other appeals courts, who ruled the Obama recess appointments were gross overreach on the grounds the appointments were made while the Senate was in session.

The Supreme Court justices heard more than 90 minutes of oral arguments, and repeatedly posed skeptical questions to Solicitor General Donald Verrilli Jr., who argued the court would essentially end that power in the Constitution if it found that those appointments were illegal.

Senate Republicans’ refusal to allow votes for nominees to the National Labor Relations Board and the new Consumer Financial Protection Bureau led Obama to make the temporary, or recess, appointments in January 2012.

The case a Washington state bottling company and a local Teamsters union, and of course, the NLRB sided with the Teamsters union. Though three federal appeals courts have upheld recess appointments made by other administrations, the U.S. Court of Appeals for the District of Columbia Circuit overturned the board’s ruling, because they were made when the Senate was in recess.

In front of the justices were two broad questions and a narrower question.

The larger issue is whether the president can made recess appointments only during the once-a-year break between sessions of Congress and whether the vacancy must occur while the Senate is away in order to be filled during the same break.

Verrilli said that 14 presidents have temporarily appointed 600 civilians and thousands of military officers to vacancies when the Senate went into recess at any point, a practice that has been well understood by both presidents and lawmakers, arguing high court ruling that a recess only happens once a year would “dramatically upset that long-settled equilibrium,” Verrilli said.

Because President Obama refused to recognize the legal challenges to his appointments and ignored the entire inevitable argument, literally hundreds of NLRB rulings could be voided if the Supreme Court upholds the appeals court decision.

The narrower consideration before the court is whether brief — or, pro forma sessions of the Senate — which is held every few days to break up a longer Senate hiatus, can prevent the president from making recess appointments. That’s what occurred in the Senate during the time the Obama recess appointments were made.

Senate Republicans also are taking part in the case, support for company and Noel Canning. They argue, for starters, that the Senate was in recess, whether the time was brief or not is irrelevant. There is another dimension to their argument, as well.

“Who determines — the Senate, or the president — whether the Senate is in session? The Constitution’s text and structure point to only one answer: the Senate,” the Republicans arguing against the administration said in court papers.

The real danger for the Democrats and the administration with losing the case, would be that presidential nominees could be blocked when the president’s party does not control the Senate, which is the reason Harry Reid and the Democrats pulled the nuclear option. Perhaps, they foresaw the high court agreeing with the lower courts on the case.

But Verrilli said the Senate made clear in voting for the pro forma sessions that no business would be conducted and that, in essence, the Senate would be in recess. “The president took the Senate at its word. And rightly so,” he said.

At one point, Justice Samuel Alito stopped Verrilli and said, “it sounds to me you are making a very aggression argument in favor of expanding presidential power,” which was something neither conservative or liberal justices seemed comfortable allowing.