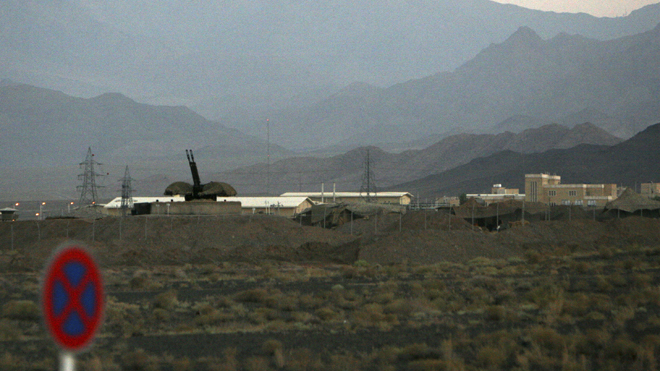 In this Sept. 2007 file picture an anti-aircraft gun position is seen at Iran’s nuclear enrichment facility in Natanz, Iran. (AP/FILE)

Inspectors from the UN nuclear watchdog the International Atomic Energy Agency (IAEA), confirmed Monday that the program to enrich uranium to 20 percent had been halted by disconnecting the centrifuges at Natanz.

According to the Islamic Republic’s state-run news agency, Iran has begun to convert its stockpile of 20 percent enriched uranium to nuclear fuel, but that has not been verified. That can be verified regarding the Iranian state TV report is that workers had cut the link feeding cascades enriching uranium at its facilities at Natanz and also Fordo, located near the city of Qum.

The state TV report also claimed that inspectors from the IAEA were present to observe the procedure.

State Department spokeswoman Marie Harf confirmed that the IAEA report had been received by U.S. officials and the other parties involved in last year’s P5+1 talks in Geneva, Switzerland.

“[We] are now studying this report [and] will have further public comment after all parties have had the opportunity to review the report,” Harf said in a statement.

The news of the Iran nuclear program halted in Natanz and Fordo clears the way for the easing of sanctions. United States officials have projected the total sanctions relief to be about $7 billion, out of roughly $100 billion in Iranian assets held in foreign banks. Iran is set to receive the first installment of $550 million on Feb. 1.

Iran is already scheduled to receive the first of 6 payments out of unfrozen overseas funds on or around Feb. 1. In total, the payments will amount to $4.2 billion, with the last of the funds scheduled to be transferred to Iran in July.

Iran will continue to enrich uranium up to 5 percent, and UN inspectors will be given daily access to the Fordo enrichment site, and monthly inspections would be allowed at the Arak heavy water reactor.

Further, according to Olli Heinonen, former deputy director of the International Atomic Energy Agency, Iran is only 2 to 3 weeks away from producing enough highly enriched uranium to assemble a nuclear weapon. Sunday on Aaron Klein’s WABC Radio show, Heinonen offered disturbing commentary that suggests the Obama administration has been asleep at the wheel, or backed the U.S. and the West in a corner.

Expert: Healthcare.gov Security 'Much Worse Off' Than Before The 'Fix'