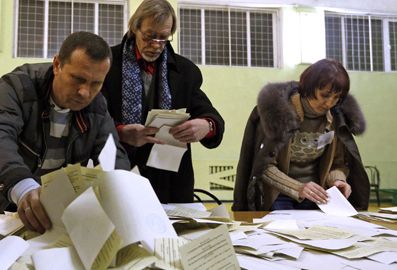 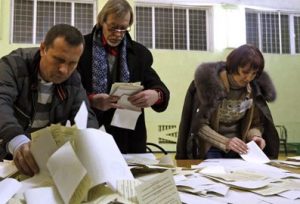 Voters overwhelmingly back the Crimean referendum to secede from Ukraine and join Russia in an election denounced by the United States, Europe and the Ukrainian government as illegal and destabilizing.

Crimean voters on Sunday overwhelming backed the Crimean referendum to secede from Ukraine and join Russia in an election denounced and unrecognized by the United States, the United Kingdom, other allies in West Europe and the Ukrainian government as illegal.

There were fireworks and Russian flags atop the celebrating crowd after election officials announced a 95 percent margin with half of the ballots counted.

Earlier, the RIA news agency said 93 percent voted in favor of annexation, citing an exit poll released just as voting ended at 8 p.m. (1800 GMT), while Reuters reported another Russian agency claimed turnout was over 80 percent. However, PeoplesPunditDaily.com reported earlier that many ethnic Ukrainians and Crimea’s large Tatar Muslim minority, were refusing to participate in the referendum.

The vote supposedly offered voters on the strategic Black Sea peninsula the choice of seeking annexation by Russia or remaining in Ukraine with greater autonomy.

Opponents of secession appeared to largely stay away Sunday, denouncing the vote as a power play and land grab by Putin and Russia. But turnout was reported to be well above the 50 percent that would make the referendum binding — and secession was expected to be approved overwhelmingly.

“Today is an important day for all of Crimea, Ukraine and Russia,” voter Manita Meshchina said in Sevastopol, the Crimean port where Russia now leases a major naval base from Ukraine for $98 million a year.

In a preemptive move in anticipation of success in the Crimean referendum, Russian-led forces seized control of Crimea. Locals say they fear the new Ukrainian government that took over when President Viktor Yanukovych fled to Russia last month will oppress them.

“Today is a holiday!” said 66-year-old Vera Sverkunova, breaking into a patriotic war song:  “I want to go home to Russia. It’s been so long since I’ve seen my mama.”

Kiev accused Moscow of pouring forces into the peninsula and warned separatist leaders “the ground will burn under their feet.”

Meanwhile, Britain has rejected the Crimea referendum to breakaway from the Ukraine and join Russia, denouncing it as a “mockery of proper democratic practice”.

He stated, “Nothing in the way that the referendum has been conducted should convince anyone that it is a legitimate exercise. The UK does not recognize the referendum or its outcome, in common with the majority of the international community. Any attempt by the Russian Federation to use the referendum as an excuse to annex the Crimea, or to take further action on Ukrainian territory, would be unacceptable.”

U.S. Secretary of State John Kerry told Moscow that Washington would not accept the outcome of the vote, which is likely to favor union with Russia for a region which has a Russian-speaking majority.

Russian Foreign Minister Sergei Lavrov asked Kerry on Sunday to convince authorities in Kiev to stop what he called “massive lawlessness” against the Russian-speaking population. In their second phone conversation in two days, Lavrov and Kerry agreed to seek a solution to the crisis by pushing for constitutional reforms in Ukraine, Russia’s foreign ministry said in a statement.

However, a senior State Department official said Kerry told Lavrov that the United States would not accept the referendum result and said Russia must pull back its forces to their bases.