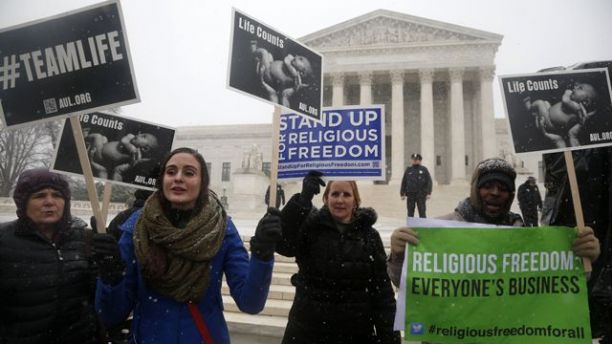 The Supreme Court on Tuesday heard arguments in the long-awaited Hobby Lobby contraception case, which is the highest-profile lawsuit over ObamaCare since the Supreme Court narrowly upheld the law in 2012.

The Hobby Lobby contraception case involves family-owned companies that provide health insurance to their employees, but because certain methods of birth control work after conception, they object to being forced to violate their religious beliefs.

However, the Obama administration and the left say a Supreme Court ruling in favor of the businesses would also disrupt the laws ability to effectively govern immunizations, Social Security taxes and minimum wages.

Justice Kennedy, typically seen as the court’s swing vote, seemed concerned for both the rights of female employees and the business owners. Kennedy asked what rights would women have if their employers ordered them to wear burkas, a full-length robe commonly worn by conservative Islamic women.

Later in the 90-minute argument, he was clearly disturbed by the logic of the government’s argument, which would apply to abortions. “A profit corporation could be forced in principle to pay for abortions,” Kennedy said. “Your reasoning would permit it.”

Major advocacy groups attended the hearing and staged press conferences and demonstrations outside. On one side of the debate, Planned Parenthood and the American Civil Liberties Union, two organizations that profit immensely from the abortion industry, argued that the rights of women should not be trumped by CEOs.

On the other side, faith-based groups and lawmakers argued that businesses should be free to choose whether they want to comply with this part of the law or not, because of clear First Amendment rights to practice one’s own religion.

“This is about whether the federal government is forcing people to violate their own faith,” said Texas Senator Ted Cruz.

ObamaCare requires employers to offer health plans with a range of services at no extra charge, including all forms of birth control for women (and, oddly enough, men).

Nearly 50 businesses that have sued over covering contraceptives, but only a few object to paying for all forms of birth control. Hobby Lobby, and the other companies involved in the case, are willing to cover most methods of contraception. However, as long as they can exclude drugs or devices that the government says may work after an egg has been fertilized, they feel there is little conflict with their faith.

The largest company among them is Hobby Lobby Stores Inc., owned by the Green family. They say their “religious beliefs prohibit them from providing health coverage for contraceptive drugs and devices that end human life after conception.”

Oklahoma City-based Hobby Lobby has more than 15,000 full-time employees in more than 600 crafts stores in 41 states. The Greens are evangelical Christians who also own Mardel, which is a Christian bookstore chain.

In the Supreme Court brief submitted last month by the Becket Fund for Religious Freedom, which is the group representing Hobby Lobby, they called the mandate “one of the most straightforward violations … this Court is likely to see of a 1993 law preserving the free exercise of faith.”

The other company is Conestoga Wood Specialties Corp. of East Earl, Pa., owned by a Mennonite family and employing 950 people in making wood cabinets.

Even though most of the companies are willing to provide the majority forms of contraception, so-called women’s rights groups are not satisfied. “Women already have an income gap. If these companies prevail, they’ll have a health insurance gap, too,” said Marcia Greenberger, co-president of the National Women’s Law Center.

The government, however, wisely argued that employers would also be able to invoke religious objections under the 1993 Religious Freedom Restoration Act to opt out of other laws, such as those governing immunizations, minimum wages and Social Security taxes. Because the Supreme Court previously has rejected some of these claims in cases decided before ObamaCare, the left saw this as their best argument.

However, the issue is only involving family-controlled businesses with a small number of shareholders. A survey by the Kaiser Family Foundation found 85 percent of large American employers already had offered such coverage before the health care law required it. There are also separate lawsuits challenging the contraception provision from religiously affiliated hospitals, colleges and charities.

The federal appeals court in Denver ruled in favor of Hobby Lobby. Conestoga Wood lost its case at the federal appeals court in Philadelphia. While the courts have been split on decision — though this is less true regarding Hobby Lobby — politicians have been firmly split down party lines. Republican support the First Amendment right to religious freedom, while Democrats have decidedly come down on the side of big government trumping personal liberty.

However, on the key issue of whether profit-making corporations may assert religious beliefs under the 1993 religious freedom law or the First Amendment provision guaranteeing Americans the right to believe and worship as they choose, the justices could actually skirt that issue. If they find that the individuals who own the businesses have the right to object, then they could avoid addressing the larger issue.

The justices still would have to decide whether the contraception mandate infringes on Americans’ religious freedom and, if so, whether or not the government makes a persuasive case the policy is so vitally important and is put in place in the least objectionable way possible.

Hobby Lobby and Conestoga Wood say the financial burden they face is obvious and clearly objectionable, citing the $100-a-day fine they would have to pay for each employee for not complying with the contraception provision. On the other hand, businesses that choose not to offer health insurance at all can pay a tax of $2,000 a year for each employee.

Yet, Mark Rienzi, a Catholic University professor who is on the Hobby Lobby legal team, argued Hobby Lobby would clearly be at a competitive disadvantage with other employers who provide contraception in their health coverage plans. “Their view is and has always been that they want to take really good care of their employees and their families,” Rienzi said.