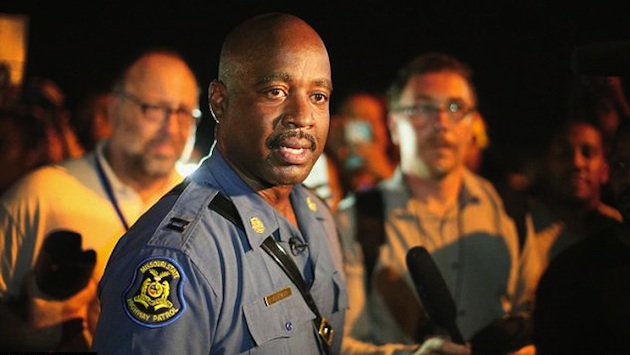 A video taped in the aftermath of the shooting of Michael Brown in Ferguson, Missouri, captures a conversation and crime scene that supports the account of Ferguson Police Officer Darren Wilson. A voice of someone who alleges to have witnessed the shooting is heard saying the 18-year-old charged at the officer who fired in self-defense.

So-called witnesses have said Officer Wilson shot the the 6 foot, 4 inch, 300-pound Brown as he ran away with his hands in the air. However, among the angry trash-talking crowd and cameraman, who tells the crowd Wilson killed Brown “for no reason,” another media-silenced witness is heard telling a very different story.

“I mean, the police was in the truck [sic] and he was, like, over the truck,” the witness says. “So then he ran, police got out and ran after him. The next thing I know, he comes back towards them. The police had his guns drawn on him.”

While the video was initially published by someone who claims their intention was to back up the Brown family, a closer examination of the video and witness comments does just the opposite.

The cameraman, who just so happened to be in the right place at the right time, gins up the crown by telling them that Wilson shot Brown as he held up his hands and said “Don’t shoot,” but according to the cameraman, the officer stood over him and “shot him some more.” However, he later admits he only hearing shots and did not witness the shooting. To back up his claim, he offers a bleak “that’s what they said” defense. Who exactly “they” were is unknown.

“They say he had his hands up and everything, and they just shot him anyway,” the unidentified camera operator quickly adds.

Dorian Johnson, Brown’s friend who was with him when he was shot and is suspected by police to have been Brown’s co-conspirator when he perpetrated a strong-arm theft at a liquor store, claimed Brown was never reaching over or into Wilson’s squad SUV. He said Wilson struck Brown with the vehicle door as he got out and began firing at Brown as he ran away with his hands in the air in surrender.

However, the forensics simply do not back up either the cameraman’s or Johnson’s story, something that isn’t lost on one person in the onlooking crowd.

“He was running away?” one man asks. “Why his body come this way, though?”

Well, of course, it couldn’t have. But those who look at the video hoping to see evidence of police brutality toward young black males will see what they want to see.

“I posted this video to provide some additional clarity on a tragic act of violence perpetrated by Ferguson police officers,” the user who posted the video, named BlackCanseco on YouTube wrote in one comment. “Yet like most things, it’s served to bring out trolls and racists.”

An autopsy conducted at the request of Brown’s family by Dr. Michael Baden, the noted former chief medical examiner of New York, reportedly determined that Brown was hit with six bullets, four to the right arm and two to the head, all to the front and none from close range. One of the bullets entered the top of Brown’s skull, suggesting his head was bent forward.

“This one here looks like his head was bent downward,” Baden told The New York Times. “It can be because he’s giving up, or because he’s charging forward at the officer.”

Meanwhile, a woman claiming to be a friend of the officer involved in the shooting of Ferguson’s Mike Brown called into “The Dana Show” offering Darren Wilson’s side of the story. She said that Officer Wilson

The FBI under the direction of Attorney General Eric Holder has opened a civil rights investigation , and Holder has approved a third autopsy on Brown’s body, which will be conducted by a federal medical examiner.

President Obama has changed his tone after initially condemning the actions of the Ferguson Police Department, which protestors-turned-rioters have blatantly acknowledged gave them confidence to cause the unrest. Now, Obama called for calm and issued a statement expressing condolences to the family and the community, though curously left out a personal statement to Officer Darren Wilson.

Missouri Gov. Jay Nixon had declared a state of emergency and implemented a midnight-to-5-a.m. curfew in the city, which was repeatedly broken during so-called protests that have resulted in more shooting deaths.