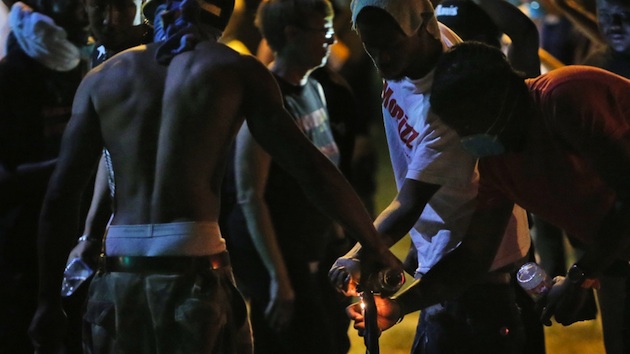 However, if we include violations of the newly adopted no-standing rule, then 78 were arrested and, just 4 were from Ferguson, Missouri. Consequently, the American Civil Liberties Union (ACLU) was denied their request for a restraining order that would have prevented authorities from enforcing the no-stopping rule.

The no-standing rule, according to Captain Johnson, will help the police discern and separate peaceful protesters from the criminal opportunists. But simply reporting on the developments in Ferguson, Missouri, doesn’t truly do the American people justice if the story isn’t told in the context of exposing the abysmal, disgraceful media coverage over the past week.

Amid all of the chaos Monday night, Fox News host Shepard Smith pushed a patently false narrative regarding the situation on the ground in the streets of Ferguson, insinuating that members of the crowd were merely walking around with their hands up in protest. Smith appeared perplexed attempting to understand why police were launching tear gas at those merely walking around with their hands up.

But, like so many other irresponsible mediates, rather than waiting for the facts to come in from his correspondents on the ground, Smith decided to make up his own. Several times his own correspondent, Steve Harrigan, had to instruct the cameraman to turn around and film protestors repeatedly taunting the police, including one instance with a man who was threatening to run his car through the police barricade.

Out of all the people who filled the streets of Ferguson on August 19, the greatest number were members of the media hoping to cash their to tickets to fame, while the number of police were slightly less than the media. The protestors represented the smallest group on the streets and, out of those people, most were not even from Ferguson.

Captain Ron Johnson, who is in charge of responding to these protests, has repeatedly pointed out the fact that there are “violent outside agitators” using these protests as a “cover” to commit crimes. Last night, immediately after shots were fired, the police attempted to contain the situation by releasing tear gas and smoke canisters, all the while taking up defensive positions behind their vehicles.

At approximately 10:00 PM (EST) some protesters started throwing bottles and rocks at police officers, causing the police to clear the street using a high frequency sound cannon. A group of protesters began marching toward the police line in a deliberately defiant action, but fortunately a group of pastors intervened by linking their arms with one another, ultimately walking the protesters back.

Shortly after, St. Louis County Police Chief Sam Dotson reported shots had been fired and the media were told to go to a designated area about a quarter of a mile away, which has been corroborated by Captain Johnson, who also said officers had come under fire from protestors. Four officers were injured and the police, themselves, did not fire a single shot. The protestors, however, did. Two people were shot in the protests Mr. Smith repeatedly characterized throughout the night as non-violent.

The St. Louis County police are trying to prevent the situation from escalation into a full-blown riot, which would be both a short- and long-term disaster for the community. In 1967, riots in Detroit, Michigan, left communities with 43 dead, 1,189 injured, over 7,200 arrests, and more than 2,000 buildings destroyed.

The cost to Detroit residents and businesses were grave and many of them never recovered, while some left and never returned. And let us not forget Al Sharpton’s personal favorite riot — the 1992 Los Angeles Riots — or, a six-day period of wide-spread assaults, arsons, looting and murders. The riots rocked L.A. and resulted in zero change, but a total of 53 people were killed and over 2,000 injured.

This is exactly what the Ferguson Police and Missouri Highway Patrol want to prevent, not peaceful protests by those who were “just walking around” mingling with responsible members of the media. It is understandable that the needs of the media demand that events are reported in a timely and personal fashion, but when the police ask you to move back or to clear an area for your own safety and theirs, it must be done.

A police officer’s number one job is to keep the citizens of the community safe and, if there are extra distractions that the police have to contend with, it not only puts the police in danger but Ferguson residents, as well. However, another outsider is making his way to Ferguson, Missouri, who has a far greater potential to agitate an-already inflamed situation than any mediate or common crowd criminal.

United States Attorney General Eric Holder is set to arrive in Ferguson on Wednesday to meet with investigators and other leaders of the community. Holder is hardly a uniting figure and his integrity is still very much in question.

Holder, who is widely criticized for “Operation Fast and Furious,” a gun-running scheme that resulted in the death of at least one U.S. Border Patrol Agent, is currently being held in contempt of Congress for lying under oath regarding Justice Department wiretaps on members of the media. But it is Holder’s incendiary racial comments made during NAACP rallies and appearances at Al Sharpton’s National Action Network that fuel a lack of trust on racial issues. Holder also dropped federal charges filed against the New Black Panther Party in a voter intimidation case, despite video footage showing NBPP members threatening elderly white people coming into voting stations and hurling racial slurs.

If the media, Holder, the president and the protesters truly did have the best interest of the community in mind, then they would consider the residents of Ferguson and the hardship they are currently causing them. The children of the community need to go to school, but yet still await for the school district to sound the “all clear” so the school year can begin, offering a chance to get an all-important education. The parents want and desperately need to go back to work to pay their bills. At the end of the day, the decent, law–abiding citizens and families of Ferguson are the ones that suffer.