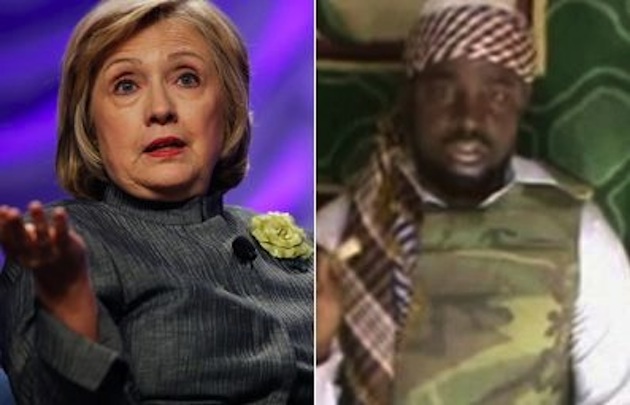 Hillary Clinton argued against designating Boko Harum a terrorist organization when serving as Secretary of State.

While immigration is a very contentious issue for the politicians in Washington, there’s actually some level of agreement among people in the real world. Almost everybody agrees that it would be foolish and short-sighted not to allow some immigration, particularly from young, educated people with valuable skills.

Similarly, there is widespread agreement that you can’t have completely open borders, particularly for those who are unlikely to be net contributors to the economy.

So the real debate (and this is where there is a lot of room for disagreement) is who gets to come to America and under what conditions.

I don’t raise this issue because I have any wise words – much less proposed solutions – on the overall issue of immigration.

Instead, let’s look at the profoundly perverse way that the federal government is using the refugee program to expand the problem of dependency.

Here are some excerpts from a disturbing story in the Washington Times.

The State Department has helped to relocate tens of thousands of refugees from the war-torn African nation of Somalia to Minnesota, where they can take advantage of some of America’s most generous welfare and charity programs. …Most of Minnesota’s Somali population started off as legal refugees through a program administered by the U.S. State Department through the Bureau of Population, Refugees, and Migration. Minnesota was selected among the nation’s states for relocation primarily because of its robust entitlement offerings.

Gee, isn’t that wonderful. We’re bringing people into the country and settling them where they can get the largest amount of handouts.

And apparently that’s Minnesota, the France of America.

“Minnesota is exceptional in many ways but it’s the closest thing in the United States to a true social democratic state,” said Ahmed Samatar, a professor of international studies at Macalester College, in St. Paul. “That translates into the way Somali refugees have been received here they’ve been given a secure environment, housing, education, health care, perhaps even some minimum income to sustain them until they can stand on their own feet. That’s all provided by Minnesota,” said Mr. Samatar, who has tracked the State Department’s refugee program. Outside Alaska, Minnesota spends more per low-income person on public welfare than any other state in the U.S., according to a report by the Center for the American Experiment, a think tank located in Minneapolis. The report found Minnesota outspent its average peer state in welfare subsidies by nearly $4,000.

Oh, just in case you’re thinking that maybe the situation isn’t so bad because at least private charities are involved, it turns out that those organizations are simply contractors for the government.

In other words, taxpayers are getting hit twice, once for official welfare payments and once for coerced “charity” laundered through groups jostling for space at the public trough.

At this point, you may be wondering whether all this spending is having a desirable effect?

As taxpayers, are we getting value for our money?

Yes, but only if you define dependency and unemployment as valuable.

Even though Minnesota has a good job market, that doesn’t seem to have translated into jobs for the Somali refugees. Minnesota’s state demographer’s office reports that only 41 percent of Somali men are working and 54 percent of Somali women are employed, meaning many may rely on the state’s handouts to survive, and are more susceptible to extremists pull. “It seems safe to assume that if they’re not working, then they’re likely receiving public welfare benefits,” said Peter Nelson, director of public policy at the Center of the American Experiment.

Amazingly, the left-wing governor of the state has doubled down on failure, expanding handouts.

Gov. Mark Dayton has expanded the state’s entitlement programs, although he remains mum on the state’s expense at doing so.

Though, to be fair, maybe he doesn’t care because Uncle Sam is the sugar daddy, picking up a big part of the tab.

“The state of Minnesota receives funding through the federal Department of Health and Human Services, Office of Refugee Resettlement to promote the successful resettlement and integration of refugees in Minnesota,” said a spokeswoman at the state’s Department of Human Services. …Minnesotans have also welcomed them onto their entitlement rolls, with the state’s cash assistance and food stamp programs, skyrocketing in recent years. The number of Somali adults and children who participated in the Minnesota’s family cash assistance program jumped 34 percent from 2008 to 2013, according to the state’s statistics. Likewise, Minnesota’s food assistance participation increased 98 percent, to 17,300 adults and children, which does not include U.S.-born Somalis, in the same timeframe.

At this point, you’re probably very upset. At least if you’re a taxpayer.

After all, haven’t we learned from painful experience that redistribution subsidizes poverty?

But I’ve saved the “best” for last.

…the effort is having the unintended consequence of creating an enclave of immigrants with high unemployment that is both stressing the state’s safety net and creating a rich pool of potential recruiting targets for Islamist terror groups. This population is…being targeted by Islamist terror organizations like the Islamic State and al-Shabab, a Somalia-based group with links to al Qaeda, according to U.S. officials. Among Minnesota-based Somali-Americans, American converts to Islam or Somali refugees, there have been numerous convictions for various levels of collaboration with Islamist terror groups, plus reports of fighting with al-Shabab or other Islamist groups.

It seems that these bums want a little excitement in their lives.

Since 2008, as many as 40 men from Minneapolis have joined Islamist groups after being pulled in by jihadists through social media, federal officials say. Last year, an American youth named Douglas McAuthur McCain died in Syria fighting for the Islamic State. Mr. McCain was recruited in Minnesota, where he lived. In 2009, another Minnesota youth, Troy Kastigar posted a recruiting video for al-Shabab before he was killed fighting for the terrorist group in Somalia. Kastigar and McCain are thought to have been friends. That same year a Somali man who left Minneapolis joined al-Shabab and blew himself up in a suicide bombing at an Ethiopian consulate in Somalia, killing 24 people.

Just like the Tsarnaev brothers. Just like the deadbeat scrounger from Australia, the nutjob moocher from the United Kingdom, and the wacko sponge in France.

So now let’s circle back to our main question. Why is the federal government bringing people into the country, luring them into dependency, and subsidizing terrorism?

Leftists sometimes like to tell us that “Government is simply the name for the things we do together.”

Well, “we” do some really stupid stuff when we act “together” through government.

Instead of a misguided refugee program that steers dodgy people into dependency, why not – with a condition of no handouts or dependency – open the door to Chinese engineers? Romanian software experts? Or Indian scientists? How about Nigerian businessmen? Maybe French doctors?

But I guess people who would assimilate and contribute to our economy aren’t as attractive as welfare recipients who despise our culture.

What Laffer Curve Tells Us Of Tax Progressivity, Government Revenue