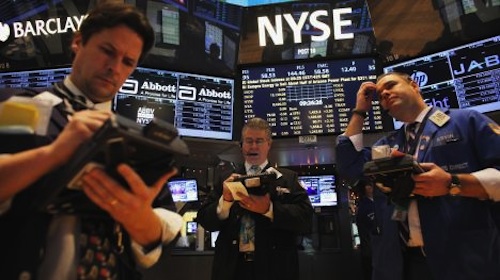 The Moscow market fell 11.5 percent while gold hit a four-month high. The country’s sovereign dollar bonds also fell more than 2 points, and the cost of buying 5-year swaps to insure against a Russian debt default sharply increased by 33 basis points.

“Investors had underestimated the risks of an escalation in Ukraine, so the events over the weekend are a wake-up call for the market,” said David Thebault, head of quantitative sales trading at Global Equities in Paris.

As of 9:45 AM ET, the Dow Jones Industrial Average had fallen more than 120 points.

“Barring a Russian attempt to take all of eastern Ukraine, which would produce a grave crisis, it appears that the big angle is economic — with a growing likelihood of sanctions that will bite, to the displeasure of multinational corporations which may have to curtail their business dealings with Russia,” analysts at the Washington, D.C.-based PRG Group wrote in a letter to clients today.

“While we cannot discount at all what is going on in the Ukraine because Russia is not some small, modest country, I would not be surprised if this week’s market close at 4pm on Friday is more determined by Friday’s payroll number and how people think the Federal Reserve will respond than what is going on in Crimea,” he said.

What Are Market-Wide Circuit Breakers and What Do They Do?