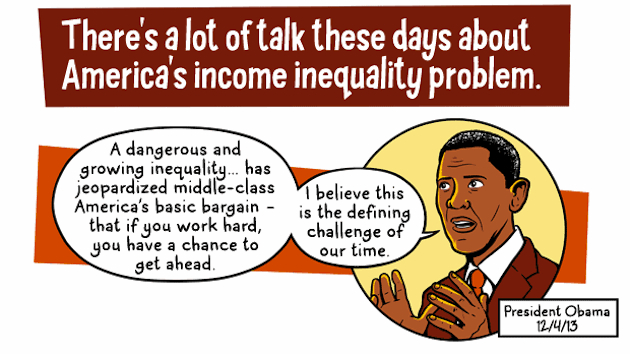 In 1729, Jonathan Swift authored a satirical essay with the unwieldy title of A Modest Proposal for Preventing the Children of Poor People From Being a Burthen to Their Parents or Country, and for Making Them Beneficial to the Publick.

He suggested that the destitute Irish could improve their lot in life by selling their children as food for the rich.

I’m personally glad this was merely a tongue-in-cheek proposal since some of my ancestors immigrated to America from Ireland in the 1800s.

But maybe it’s time for a new “modest proposal” to make our leftist friends happy.

They’re constantly griping about the rich, asserting that the “top 1 percent” or “top 10 percent” are making too much money. Indeed, folks on the left want us to believe that “income inequality” is a big issue and a threat to the country.

So why not update Jonathan Swift’s idea and simply consume all the rich people? Indeed, P.J. O’Rourke actually wrote a book entitled Eat the Rich.

But we don’t really need to feed them to anyone. Just dump their bodies in a mass grave or bury them at sea.

In one fell swoop, income inequality could be dramatically reduced. Sure, those of us left would wind up being equally poor, like in Cuba or North Korea, but you can’t make an omelet without breaking a few eggs!

But some of you probably think arbitrary executions of rich people is a step too far. After all, it would be unseemly to mimic France’s Reign of Terror or Stalin’s extermination of the Kulaks.

That’s why we should instead look at a watered-down “modest proposal” put forward by David Azerrad of the Heritage Foundation. Here’s some of what he wrote for Real Clear Politics.

…consider the following bold proposal to solve our inequality problem once and for all: exile the top 0.1% of income earners. Round up all 136,080 taxpayers who make more than $2.16 million a year and ship ’em off to whatever country will accept them. Presto. Problem solved. …The 0.1 percenters, whose growing incomes have been fueling the rise in inequality over the past several decades, will have vanished overnight.

Though Azerrad does point out that exile has many of the same economic downsides as execution.

..it will put a serious dent in the government’s finances. Almost one in every five tax dollars that the government collects comes from the 0.1 percent. To make up for the shortfall, we should probably also confiscate all their assets before exiling them. What about the jobs the 0.1 percenters create and the value they add to the economy? …we’d be losing all but twelve of the CEOs from the 300 largest companies in the country. The show business industry would collapse overnight with all the star talent in exile. Gone too would be the best investment bankers, financial consultants, surgeons and lawyers. One third of the NFL’s roster and well over half of the NBA’s roster would also be culled.

Heck, we’re already confiscating some of the assets of rich people who emigrate, so part of Azerrad’s satire is disturbingly close to reality.

But let’s stick with the more farcical parts of his column. To deal with potential loss of tax revenue, Azerrad proposes to have the government sell America’s rich people to other countries.

…we will need to generate more revenue. That could be done rather easily by auctioning off the top-earning Americans to the highest foreign bidder.

That makes sense. There are still a few places in the world – such as Switzerland,Cayman, Hong Kong, Bermuda, etc – where the political class actually understands it is good to have wealth creators.

By the way, Azerrad points out that there will be a tiny little downside to this proposal. Contrary to the fevered assertions of Elizabeth Warren and Paul Krugman, penalizing the rich won’t do anything to help the less fortunate.

Mind you, life prospects will not have improved for a single poor child born into a broken community with failing schools. Or for a single recent college grad crushed by debt and facing dim job prospects. Or for a single family struggling to make ends meet. …It won’t be any easier to start a business or to find a job. Four in 10 children will still be born out of wedlock. Our entitlements will still face unfunded liabilities of almost $50 trillion. …We will however be able to boldly proclaim that we have addressed “the defining challenge of our time.” Our country will in no way be better off. But we will have satiated our lust for equality.

Actually, our country will be far worse off. Jobs, investment, and growth will all collapse.

So while the poor may wind up with a larger share of the pie, the overall size of the pie will be much smaller.

And this is perhaps the moment to stop with the satire and take a more serious look at the issue of income inequality.

I’ve repeatedly argued that the focus should be growth, not redistribution. To cite just one example, it’s better to be a poor person in Singapore than in Jamaica.

But let’s look at what others are saying. Professor Don Boudreaux of George Mason University addresses the issue (or non issue, as he argues) in a column for the Pittsburgh Tribune-Review.

I’ve never worried about income inequality. …Income inequality — like the color of my neighbor’s car or the question of the number of pigeons in Central Park — just never dawns on me as an issue worthy of a moment’s attention.

Don then speculates about why some people are fixated on inequality.

I think all three hypotheses are correct, though people in the public policy world rarely admit that they’re motivated by envy.

But, for what it’s worth, I think many leftists genuinely think the economy is a fixed pie.

And if you have that inaccurate mindset, then extra income or wealth for a rich person – by definition – means less income and wealth for the rest of us. This is why they support class-warfare tax policy.

The challenge, for those of us who believe in economic liberty, is to educate these people about how even small differences in growth can yield remarkable benefits to everyone in society within relatively short periods.

A lot of establishment Republicans, meanwhile, seem to implicitly believe that redistribution is desirable as a tactic to “buy off” the masses. They’ll privately admit the policies are destructive (both to the economy and to poor people), but they think there’s no choice.

When dealing with these people, our challenge is to educate them that big government undermines social capital and makes it far more likely to produce the kind of chaos and social disarray we’ve seen in Europe’s deteriorating welfare states.

P.S. For a humorous explanation of why the redistribution/class-warfare agenda is so destructive, here’s the politically correct version of the fable of the Little Red Hen.

And the socialism-in-the-classroom example, which may or may not be an urban legend, makes a similar point. As does the famous parable about taxes and beer.

P.P.S. I still think Margaret Thatcher has the best explanation of why the left is wrong on inequality. And if you want to see a truly disturbing video of a politician with a different perspective, click here.