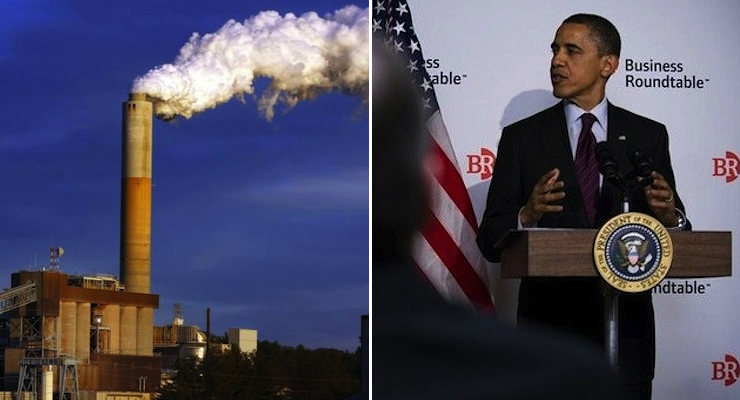 When people think about government regulation, it’s understandable that they focus on things that impact their everyday lives. Most of us, for instance, are irked by government’s war against modern life. Bureaucratic pinheads in Washington think they have the right to plague us with crummy dishwashers, inferior light bulbs, substandard toilets, and inadequate washing machines.

But what matters more is the way that onerous regulation throws sand in the gears of the economy, slowing growth and undermining job creation. And no matter how you slice the data, there’s no escaping the conclusion that American competitiveness is suffocating because of red tape and regulation from Washington.

Here are some very depressing bits of information I’ve shared in the past.

So what’s President Obama’s plan to deal with this regulatory morass?

Well, he wants to make matters worse. I’m not joking. Here are some excerpts from a report in The Hill.

President Obama is moving to complete scores of regulations as he looks to cement key parts of his legacy… The White House quietly released its formal rulemaking schedule late last week, revealing the administration’s latest plans for regulations currently in the works at agencies across the federal government. …Obama has no intentions of slowing down the process during his final year in office. …Critics, however, say the President has already issued far too many burdensome regulations. …the administration has finalized about one rule a day since Obama took office and estimates the compliance costs associated with those rules to total about $700 billion.

What makes this so depressing is that the Mercatus Center has new research showing that the regulatory burden is especially harmful to entrepreneurs and small businesses.

Here are some of the findings from this new study.

So who benefits from red tape?

Other than bureaucrats and lobbyists, the big winner is big business.

…we find that large incumbents are actually less likely to die when their industry becomes more regulated. That finding suggests that incumbents, in particular, benefit from increasing levels of regulation and provides support for the idea that incumbents might actively seek increasing regulation to deter entry and limit competition (consistent with capture theory).

The good news is that a growing number of people are recognizing the need to deal with excessive regulation.

I don’t think many people would accuse Professor Noah Smith of Stony Brook University of being a libertarian, yet he makes a strong case for regulatory relief in a recent Bloomberg column.

Republicans should stop focusing so much on taxes and devote more attention to deregulation. …Although it’s very difficult to measure the amount of regulation across the economy, there are more and more areas that are cause for concern. For example, the scope of occupational licensing, which economists mostly believe is a drag on growth, is startling, and seems to have no good reason behind it. …Another concern is environmental regulation…local development opponents are often able to use costly environmental reviews to block needed infrastructure. A third area is zoning. As the incentives for density have risen, zoning regulation has become an increasing burden on growth.

He lists additional items, such as the approval process at the FDA for new drugs and all the Byzantine red tape required by the Sarbanes-Oxley law, and he also makes the very important point that cost-benefit analysis is necessary since not all regulations are created equal.

So what’s the solution to this mess?

Research from the folks at Mercatus points to some possible solution.

First and foremost, cut the budgets for regulatory agencies. If there’s less money, there will be fewer bureaucrats with fewer resources.

Here’s a very persuasive chart from a Mercatus report showing the correlation between regulatory budgets and the burden of red tape.

By the way, notice how regulatory spending exploded during the Bush years. Yet another bit of data showing that statist Republicans can be even worse for the economy than statist Democrats.

But I’m digressing. Let’s now look at another potential way of reining in the regulatory state.

Another study from Mercatus looks at a policy in Canada that put an aggregate cap on red tape.

Canada recently became the first country in the world to legislate a cap on regulation. The Red Tape Reduction Act, which became law on April 23, 2015, requires the federal government to eliminate at least one regulation for every new one introduced. Remarkably, the legislation received near-unanimous support across the political spectrum: 245 votes in favor of the bill and 1 opposed.

The nationwide legislation was based on an experiment in British Columbia.

There is no question that BC’s economic performance improved markedly after 2001 in contrast to the “dismal decade” of the 1990s. The province went from being one of the worst performing in the country to being among the best. …economic growth in BC was 1.9 percentage points below the Canadian average between 1994 and 2001 but 1.1 percentage points above the Canadian average between 2002 and 2006. BC’s real GDP growth was lower than Canada’s as a whole in six of the nine years between 1992 and 2000, but BC’s GDP grew faster than Canada’s every year between 2002 and 2008.

Well, just as a spending cap is the right approach to fiscal policy, a regulatory cap also is the right way to deal with red tape.

…a hard cap on the total amount of regulatory requirements…has forced a discipline that did not previously exist, a discipline that has helped change the culture within government to one where regulators see their job as focusing on the most important rules.

Gee, what a radical idea. Requiring the folks in Washington to set priorities and make tradeoffs!

P.S. I guess we can add regulatory reform to our good-things-we-can-learn-from-Canada collection, along with spending restraint, corporate tax reform, bank bailouts, reducing double taxation, and privatization of air traffic control. Heck, Canada even has one of the lowest levels of welfare spending among developed nations.

P.P.S. Since we just reviewed research on how big corporations can benefit by supporting regulations that will disproportionately hurt their small competitors, you probably won’t be surprised to learn that some of those same big companies support tax hikes that will be especially damaging to small businesses.